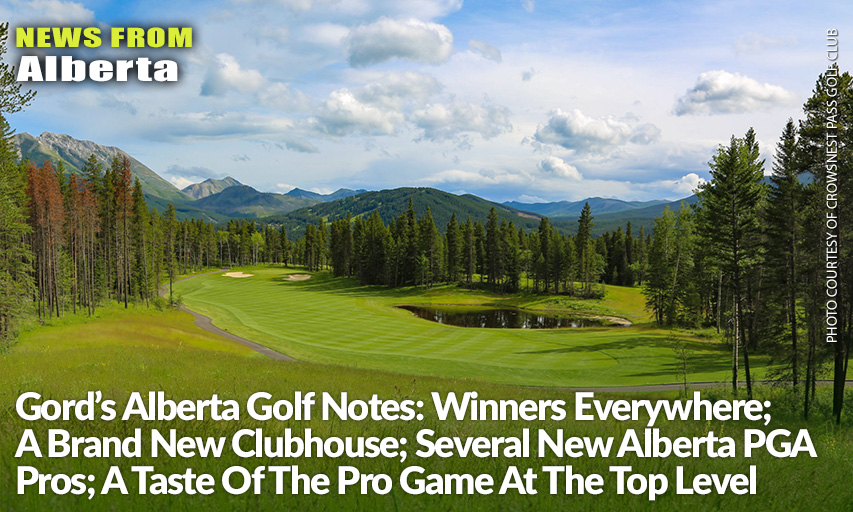 Now that it’s stopped raining, finally — knock on wood — the golf world in Alberta is busier than ever as players take advantage of prime playing conditions and free time. From the top of the province to the bottom, clubs are reporting that rounds are up significantly and business is booming.

One spot in southern Alberta, the Crowsnest Pass Golf Club, is definitely one of those tracks that’s seeing a spike in numbers and that’s likely to rise in the very near future. You see, after putting nine new holes into play last year, and the word spreading quickly about what has be-come a must-play track, a new clubhouse has now opened its doors to welcome guests. The new building, perched on the highest spot on the layout in Blairmore, opened up on July 27 and is now the starting point of one’s appointed duties on their fairways and greens. The impressive new building with sight lines over the course and the mountains beyond is designed to host more than golf events, but hey, you’re there to play so you may as well enjoy the new facility after a round at this outstanding mountain layout.

Tournament action across Alberta has been hot and heavy over the past couple of weeks, both on the amateur end of the game and on the professional side. Starting with those who don’t get paid for their skill, a couple of major amateur events took place in the recent past. First up was the Alberta Senior Ladies Championship at the beautiful Glendale G&CC in Edmonton2015, which was taken home by Calgarian Kim Carrington for the second year in a row. The win marked her fourth such title and the first time she’s won in an even-numbered year with the other wins coming in 2015, 2017, and then 2019. In the Men’s Amateur, held at the venerable Medicine Hat G&CC, Michael Valk used the home field advantage as he captured the title in his hometown. Valk, 21, closed things out at minus-9 for the tournament, winning by a solid five shots. Finishing second was the Alberta Junior champion, Hunter Thomson from Calgary, who also won a McLennan Ross Junior Tour event before this event.

On the professional side of the scorecard in tournament action, the Tournament of Champions (which teams a club professional with the amateur club champion) was dominated by southern Alberta twosomes. The event was held at the Glendale in Edmonton and saw the team of Kurtis Foote and Kevin Temple from Calgary’s Country Hills GC walk away with top prize. Placing second was the duo of Jamie Berlitz andKris Wasylowich from the Picture Butte GC and third place went to the team of Scott Anderson and Dave Stuart from The Winston GC. In the Club Pro Championship, played over 36 holes at the Windermere G&CC in Edmonton, it came down to a two-man battle. When all was said and done, Craig McArthur from the Ed-monton Junior Golf at Jagare Ridge carted home the trophy as he edged Stony Plain’s Jeff Cuthbertson in an extra hole playoff. For the victory, the winner pocketed $2,700.

Sorry to combine metaphors here, but what looked to be a dream weekend for Calgarian Aa-ron Crawford turned into a wake-up call after a couple of days. Crawford, who is a caddie on the PGA TOUR for Martin Trainer, had someone toting his clubs when he earned a spot in the 3M Open in Minnesota after a fine Monday qualifying round of 8-under 63 got him into the field. And the guy carrying his clubs? Well, it was his dad. While his opening round was a solid 2-under 69 he had a 74 the second day, which was a bit too much to make the cut.

Making the cut for Good Guys of the Week, were the fine folks at the Edson Golf Club, who opened their arms to welcome players from the Whiteout GC, who found their track under water after heavy rain and a fast-rising river caused some havoc. Edson, a member-owned facility that sits about 90 clicks away from Whitecourt, said “C’mon over and play here,” while repairs were made at the wet layout. That hospitality just goes to show that while clubs can be competitive when it comes to inter-club events they are always willing to lend a hand when needed. Well done guys!