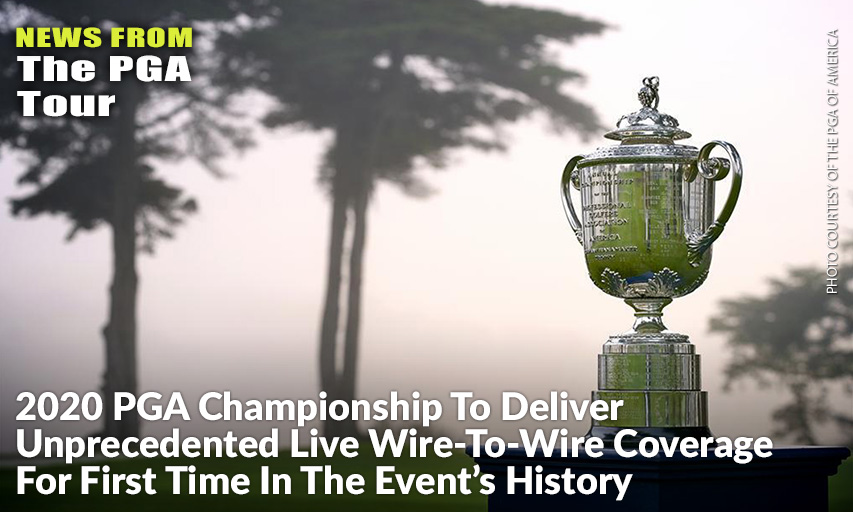 The 102nd PGA Championship will be the first Championship in the landmark new 11-year agreement between CBS, ESPN, and the PGA of America, combining to deliver more than 170 cumulative hours of live coverage - the most in PGA Championship history - from the first tee shot to the final putt across their broadcast, cable and digital platforms.  As of today, 97 of the top 100 players in the Official World Golf Ranking are scheduled to compete.

“This year’s PGA Championship will be unlike any of the previous 101 that have come before,” said PGA of America CEO Seth Waugh. “We are grateful to Gov. Newsom and the State of California, and Mayor Breed and the City and County of San Francisco – they have been terrific partners in helping us navigate the many challenges to make it possible to responsibly conduct the first Major Championship of 2020, the PGA Championship at TPC Harding Park, our second-straight year at a public course.

“Our hope is that watching the world’s best players compete alongside the Team of 20 PGA Professionals in the field for the first major championship of the year will lift people’s spirits and showcase what PGA Members do everyday to inspire the future of the game. It’s the perfect time to introduce the PGA Championship’s first wire-to-wire broadcast coverage with CBS and our new partner ESPN. We’re excited about what’s in store for fans on CBS, ESPN and ESPN+. While the local community cannot be with us physically onsite, we will certainly carry their spirit of resilience and unity with us next week.”

CBS Sports will serve as the lead production entity producing all of the traditional 72-hole coverage for the entire Championship. CBS, working closely with ESPN, will offer a distinct and innovative presentation of the PGA Championship, while delivering the highest-quality and industry-leading production, technology and announcers.

Additionally, leading into the Championship, CBS, in conjunction with the PGA of America, will broadcast a special PGA Championship Preview on Saturday, Aug. 1 (1 p.m. ET), hosted by CBS Sports’ Amanda Balionis.

The PGA Championship returns to ESPN for the first time in 30 years, as ESPN and ESPN+ begin a new, 11-year relationship with the Championship, and will bring viewers more options than ever before available for the event. SportsCenter will have reports from the PGA Championship for seven days beginning Monday, Aug. 3.

ESPN and ESPN+ will have a combined 12 hours of live coverage each day of the first and second rounds of the Championship on Thursday and Friday, Aug. 6-7, beginning with the first tee shot each day at 10 a.m. ET.  ESPN+, the sports streaming service from Disney’s Direct-to-Consumer and International (DTCI) segment and ESPN, will stream live play from 10 a.m. – 4 p.m. ET each day, while live broadcast coverage will continue on ESPN from 4 p.m.-10 p.m. ET.

Golf fans also will have expanded weekend viewing available, with five hours of morning and early afternoon play on both Saturday and Sunday, Aug. 8-9. ESPN+ will stream live play in the third round from 11 a.m.–1 p.m. ET on Saturday, with ESPN continuing from 1 p.m.-4 p.m. ET on Sunday. ESPN+ will stream final round action from 10 a.m. until noon ET, followed by three hours on ESPN from noon until 3 p.m. ET. Saturday and Sunday start times will be dependent upon tee times and the cut size. In addition, ESPN+ will offer fans exclusive Featured Group coverage on all four days, as well as Featured Hole coverage on Saturday and Sunday.

PGAChampionship.com will take a comprehensive approach with highlights and coverage that brings to life the passion and excitement of the 2020 PGA Championship. With this being the first-ever spectator less major in history, fans will have the feel of what it is like to be at TPC Harding Park, with an all-access pass to virtually experience the PGA Championship through technology and social engagement.

The user experience will be robust and state-of-the-art, as the recently redesigned PGAChampionship.com showcases the greatest players in the world throughout their journey to win a major Championship.

The PGAChampionship.com website and apps will present comprehensive live coverage, with engaging content for all golf and sports fans including: LIVE scoring and leaderboard updates, PGA Championship LIVE on the Range, a LIVE Minute-by-Minute blog that recaps and highlights breaking news and player updates from the course, more than 1,000 automated video shot-by-shot recaps of play from throughout the field, wall-to-wall social media highlights and coverage, and a new virtual Media Hub for credentialed media.

And in parallel, PGA.com will offer a complementary mix of content and features to showcase the journey and experience of the Team of 20 PGA Members playing in a Major Championship, along with a menu of Coaching content that is designed to help golfers of all skill levels improve their own golf journey and relationship with the game.

Below is the Comprehensive Television and Digital Schedule for Coverage of the 2020 PGA Championship across ESPN, ESPN+ and CBS:

Many of golf’s greatest champions, from Walter Hagen, Gene Sarazen, Sam Snead, Byron Nelson and Ben Hogan, to Lee Trevino, Jack Nicklaus, Tiger Woods, Rory McIlroy and Brooks Koepka, have had their names inscribed on the famed Wanamaker Trophy, one of the most iconic trophies in sports.

Seven of the past 10 winners of the PGA Championship went on to become No. 1 in the Official World Golf Ranking, including Koepka, who won his second consecutive PGA Championship in May 2019 at Bethpage Black in Farmingdale, New York. The two-time defending PGA Champion will use the season’s initial major championship to bid for history, as he’ll seek to become the first player to win the same major three consecutive times since Australia’s Peter Thomson claimed three straight Open Championships from 1954-'56.