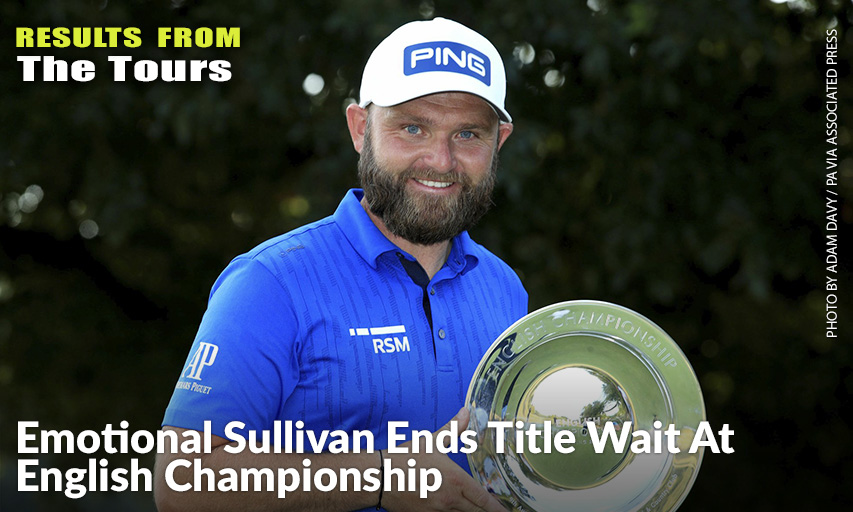 WARE, England — An emotional Andy Sullivan ended a near five-year wait for his fourth European Tour title as he recorded a seven-shot victory at the English Championship in Ware.

Heading into the final round at Hanbury Manor with a five-shot advantage, Sullivan saw his lead cut to just two by Spain’s Adrian Otaegui (66).

But while his challenger faltered over the closing stages, Sullivan recorded four birdies on the back nine to shoot a 6-under 65 for a 27-under 257 total.

The victory was his first on the European Tour since the 2015 Portugal Masters and his first since the birth of his son and the deaths of both his brother-in-law as well as a close friend.

Tears flowed as Sullivan was greeted by his family via a laptop that was set up off the 18th green after he finished the round.

“I think it was just the people that have missed it for me,” he said when asked about his emotional reaction. “My brother-in-law was only 24 and got taken from us, so it’s quite emotional for him not to witness it. A good friend of mine has passed as well. It means a lot to do that for them.

Sullivan made a fine start with an eagle on the second but a bogey on the fourth coupled with five birdies for Otaegui saw the Spaniard move within three at the turn.

Second-place Otaegui holed from just off the green on the 12th to cut the lead to two shots but Sullivan responded with a gain at the same hole before he birdied Nos. 14 and 15 to take charge.

His challenger faded and dropped a shot on the 17th and Sullivan finished with a flourish to birdie the last.

“I can’t remember too much about my emotions in the first three wins but I was fighting the tears back on those last three holes,” Sullivan said. “I was really just proud of myself for what I’ve achieved.”

Third-place Rasmus Hojgaard ended on 19 under after a flawless 64 as the 19-year-old Dane recorded a third successive top six finish on the UK Swing.