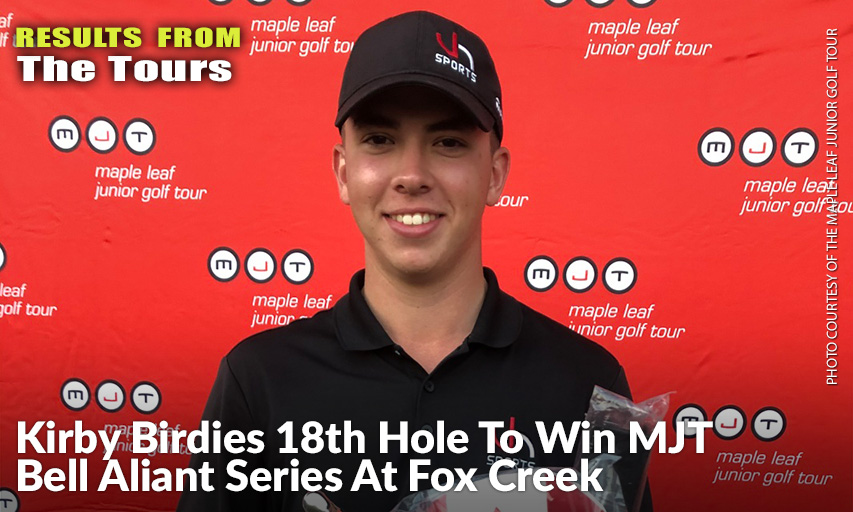 The spotlight fell on the MJT Junior Boys Division and the exciting contest between Woodstock, MB, golfer Daniel Kirby, 17, and Dieppe-local Patrick Cormier, 18. Both players carded opening rounds of 75 on the immaculate course to tie for the top spot on the leaderboard. Still tied going into the 18th hole of the second round, a timeous birdie by Kirby edged him to victory with a score of 74 (149). “I was happy to come out with the win,” commented Kirby. “My short game, scrambling, and making my short putts were all keys to my victory.” Cormier’s 75 on the second day gave him a two-day total of 150, good enough for the runner-up position.

MJT past champion Julien Babineau, 15, took home the Hoselton trophy in the MJT Juvenile Boys Division. The Dieppe-resident fired rounds of 77 and 81 (158) to win his second career MJT win. “I stayed strong,” remarked Babineau. “Even after my bad shots or mistakes, I never gave up.”

The MJT Bantam Boys Division witnessed another Dieppe player come back to win the Hosleton trophy after being down five shots. 14-year old Jacob LeBlanc recorded scores of 88 and 77 (165) including three birdies in his opening nine holes on day two. “It feels great to come back and redeem myself,” commented LeBlanc. “I stayed patient and focused on one shot at a time.”

Truro, NS, golfer, Elliott Mullen, carded 84 and 83 (167) to win the MJT Peewee Boys title by two shots. The 12-year old player made three birdies on his way to his first career MJT victory. “I kept my head up and stayed positive,” commented Mullen. Mullen, who finally entered the winner’s circle after three previous runner-up finishes, will be looking to maintain his spot at the top of leaderboard through the rest of the 2020 MJT Atlantic Canada circuit.

Mackenzie Deveau, 17, of Moncton, NB, found her way back to the top of the podium in the MJT Girls 15-19 Division. Deveau, who recorded one win and three second-place finishes last year on the MJT, carded scores of 84 and 85 (169) at Fox Creek Golf Club to pick up her first 2020 win. “It feels great to win after all the work I’ve put in this year,” commented Deveau. “These are always great events to play.”

14-year old Addison McClune fired rounds of 97 and 88 (185) to win the MJT Girls U15 Division. The Rothesay, NB, golfer, playing in her first ever event on the MJT, claimed her first career title, stating, “It feels awesome to win my division and compete on the MJT.”

Full results can be viewed here. The next junior tour stop in Atlantic Canada is the MJT Humber College PGM Atlantic Championship at Fox Harb’r Resort in Wallace, NS, on August 19 and 20 More information is online at www.maplejt.com. This event will be the final opportunity to qualify for the MJT National Championship presented by TaylorMade and adidas golf at Morgan Creek Golf Course in Surrey, BC.

The non-profit Maple Leaf Junior Golf Tour is Canada’s number one-played Junior Golf Tour as well as the only national junior tour run exclusively by PGA of Canada Professionals and the ‘Road to College Golf’ in Canada. The organization is supported by valued Premier, Tournament and Product Partners. The MJT hosts close to 90 events across Canada, including free Ford Go Golf Junior Clinics, the MJT Mini Tour for 12U and multi-day events for competitive players aged 11-19 which also offer qualifiers for international tournaments. The program has annual awards, scholarships and incentives to help reward performance and participation throughout each season. MJT alumni include many Professional Tour players and PGA of Canada Professionals, as well as Canadian Amateur, National and Provincial Junior Champions. The MJT aims to develop champions, in golf and in life, promoting the game from grassroots through to the provincial, national, university and professional levels.