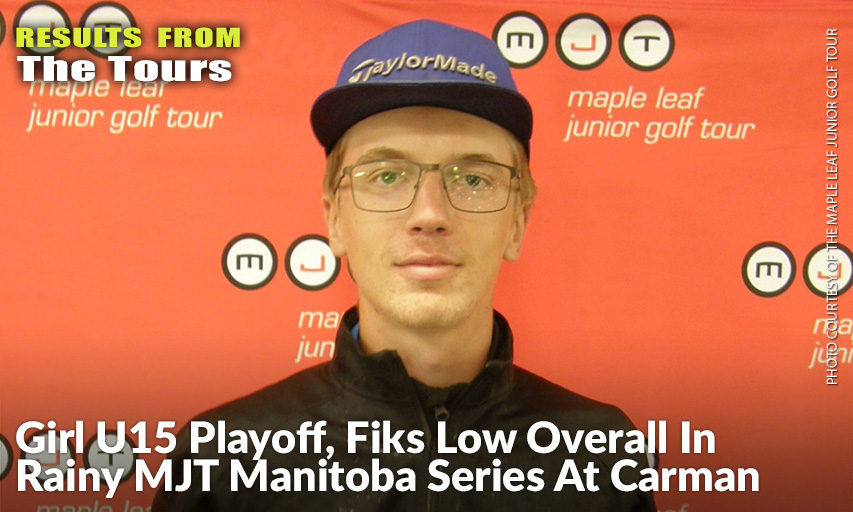 CARMAN, Manitoba — The Maple Leaf Junior Golf Tour made its way to Carman, MB, on August 13 and 14, to host the MJT Manitoba Series at Carman Golf Club, the second-to-last event on provincial circuit this season. Junior golfers between the ages of nine and nineteen battled through two days of rain for titles in six divisions, with Low Overall score claimed by MJT veteran, Noah Fiks, of Winnipeg, MB.

Fiks, who fired rounds of 73 and 74 (147), also took home the Hoselton trophy in the MJT Juvenile Boys Division. The 16-year-old player picked up his second 2020 MJT win of the year with his performance at Carman Golf Club. “The key to my victory was staying calm,” he commented. “The rounds were long in the rain and I just focused on one shot at a time.”

A playoff was needed in the MJT Girls U15 Division to decide a winner after 36 holes of play, when Jeri Lafleche (90, 86), 13, of Winnipeg, and Crystal Zamzow (89, 87), 14, of Swan River, MB, finished tied for the lead with total scores of 176. Lafleche emerged victorious from the playoff to acquire her second MJT win of the season, saying, “It feels very good to win, I worked hard and was happy about my play.”

The MJT Junior Boys Division saw Winnipeg’s Trey Ross, 17, emerge on top with scores of 75 and 73 (148). “I just tried to keep dry,” remarked Ross jokingly when asked about the key to his win. “It feels good to go out in the rain and get it done!”

Making it back-to-back wins on the MJT was 14-year-old Grady Chuback in the MJT Bantam Boys Division. The Headingly, MB, golfer fired 77 and 73 to win the title by an impressive 10-shot margin. “It feels good to win,” commented Chuback. “The key to my victory was playing the shot I had on the day; for example, on the first day I was hitting a fade and I played with that.”

Winnipeg-resident Brayden Boge continues to impress this year on the MJT picking up another victory at Carman Golf Club. The 12-year-old golfer carded scores of 76 and 79 (155) to take home the Hoselton trophy in the MJT Peewee Boys Division. When asked about the competition, Boge commented, “I just tried to stay focussed and keep the rain out of my mind.”

18-year-old Mikyla Albert, of Selkirk, MB, also picked up back-to-back wins carding a pair of 86’s (172) at Carman Golf Club. Albert has set the tone since returning from injury and is working to bring her game back into tip-top form, stating, “I stayed calm after the bad holes. It was a struggle, but I was happy to come back and get the win.”

Full results can be viewed here. The finale to the Manitoba circuit, the MJT Bieber Classic – PGA of Manitoba Championship at Transcona Golf Club, will take place in Winnipeg on August 24 and 25. Registration can be done online at www.maplejt.com. This is the final opportunity for Manitoba juniors to qualify for the MJT National Championship presented by TaylorMade and adidas Golf.