A Hole-By-Hole Of Winged Foot And Key Shots 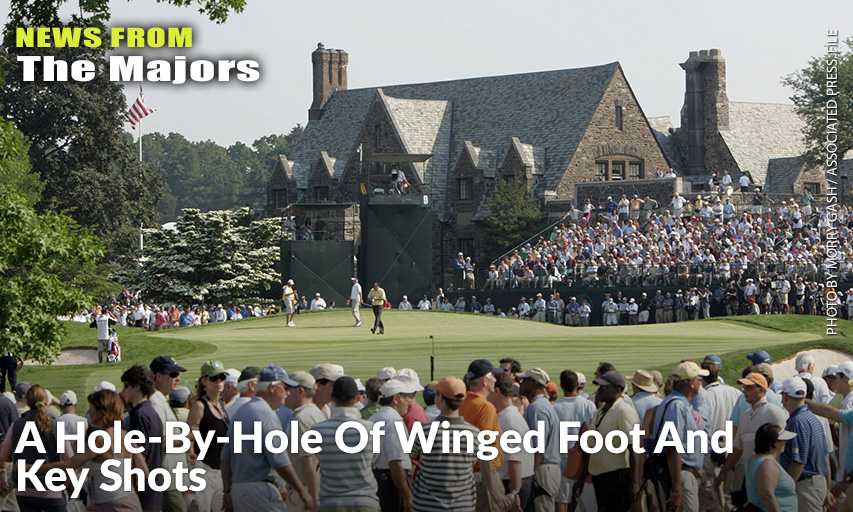 MAMARONECK, New York — A hole-by-hole look at the West Course at Winged Foot Country Club, site of the 120th U.S. Open with memorable occasions from majors played there:

A gentle dogleg to the left with a fairway that gets more narrow the longer the drive. The challenge coming on the green. It is severely pitched toward the front with two pronounced undulations running down the green. The approach must be left below the hole.

Major moment: Jack Nicklaus had a 25-foot birdie putt above the hole in the first round of the 1974 U.S. Open. He ran it nearly 30 feet by the cup and off the green.

A slight dogleg to the right, with a bunker on the left that provides the best angle to the green. Anything to the right likely will mean pitching out to the fairway. The green is protected by two deep bunkers, and branches from a 110-foot elm tree behind the green make a back left hole location difficult.

Major moment: Fuzzy Zoeller holed a 60-foot birdie putt in his 18-hole playoff against Greg Norman in the 1984 U.S. Open, sending him on his way to a 67 to win by eight shots.

Bunkers guard the left and right sides of the heavily contoured green. The key is to keep the ball below the hole.

Major moment: Billy Casper purposely laid up short of the green and got up-and-down all four rounds in winning the 1959 U.S. Open.

A slight dogleg to the left that is partially blind, so it will be important to hit the fairway, which tightens with two fairway bunkers. The green was expanded during a 2016 renovation and is guarded by two deep bunkers on the front corners.

Major moment: Phil Mickelson went into the final round in the 2006 U.S. Open tied with Kenneth Ferrie. He made birdie on this hole — one of only 13 birdies Sunday — for his first lead of the final round. That didn’t last long, however, as Mickelson chopped his way to two straight bogeys and the game was on. It didn’t end well for Lefty.

This played as a par 5 for the 2006 U.S. Open, and now the ninth hole will switch to a par 4. It’s one of the tougher tee shots on the course, with the landing area slanting to the right on a hole that bends to the left. Both sides of the green are protected by bunkers.

Major moment: Arnold Palmer was leading by one in the third round of the ’74 U.S. Open. He pulled his tee shot into the trees, then decided to play out to the fourth fairway. His 3-wood caught the top of the trees and dropped down, leading to bogey. He lost his lead and never got it back.

The shortest par 4, and perhaps most exciting hole at Winged Foot. Depending on the hole location and wind, some players might try to drive the kidney-shaped green that is guarded by a deep bunker in the front and a stream that meanders to the left and behind the green. The rough will be exceptionally deep on his hole. Decisions could lead to a birdie or bogey.

Major moment: Bill Melhorn appeared to be on his way to winning the 1929 U.S. Open until taking an 11. He never recovered.

The shortest and likely the most easy of the par 3s, this will require no more than a short iron. The green is elevated. Front hole locations are guarded by a steep false front and bunkers that are 7 feet below the surface.

Major moment: Johnny Miller took four shots to get out of a greenside bunker in the ’74 U.S. Open. “I kept telling myself, ‘I’m a good bunker player.’ But after the third try, I decided maybe I’m not,” he said.

After two fairly easy holes, players face a daunting stretch where par is valued. This long dogleg to the right has a very undulating green. The tee shot should hug the right tree line. The green has a pronounced ridge running diagonally across, leaving no easy putts.

Major moment: Ernie Els drove into the rough and tried to reach the green in the first round of the 1997 PGA Championship. The ball moved about 8 feet, leading to double bogey. “Quite embarrassing, to say the least,” he said.

In 2006, this was the first the time the U.S. Open had a par 4 over 500 yards. Now it’s a par 5. The green is open at the front, allowing for shots to run onto the undulating green. A mound in the middle of the green affects approach shots and chipping.

Major moment: Hale Irwin hit a fairway wood into 35 feet and made the birdie putt as he began his charge into the lead in the final round of the ’74 U.S. Open.

One of the toughest holes at Winged Foot, with an elevated green that slopes toward the front. Missing the green makes par unlikely, and even shots on the green are difficult because of the pronounced slope and rolls. The bunkers are nearly 9 feet below the putting surface.

Major moment: Ben Hogan described this shot as “a 3-iron into some guy’s bedroom.”

Tee shot likely will be an iron or utility club to stay short of the bunker on the left, and a larger bunker farther away on the right. A wedge or short iron will be left to a relatively docile green, leaving a decent chance at making birdie.

Major moment: Fred Couples made eagle by holing out a 9-iron from 140 yards in the second round of the ’97 PGA Championship.

After a straight tee shot, the hole bends sharply to the left, and players will have to calculate the distance of their layup with cross bunkers looming. Any second shot to the left is in big trouble. The second shot must clear an 80-foot tree at the turn of the dogleg.

Major moment: John Daly hit driver over the trees and into the adjacent fairway in the third round of the ’97 PGA Championship. Disgusted, he hurled his driver over the fence. Marshals later retrieved it for him.

Relatively benign par 3 with bunkers on the left and right of the green, although par becomes difficult if the green is missed. Anything to the left leaves player virtually no chance at getting the chip close. The front third of the green acts like a false front, sending balls down the hill.

Major moment: Davis Love III was leading by three in the final round of the ’97 PGA Championship when he pulled a 4-iron left of the green, with only about 10 feet of green between the rough and the flag. His pitch lipped out for a tap-in par, a shot Love later said “saved the championship.”

The tee shot is partially blind, and must be played over or around a bunker on the left side. Moving the ball from right-to-left will help players keep tee shots in the fairway of this dogleg left. The green is elevated and slopes from the back left to the front right, and it is well-guarded by bunkers.

Major moment: Gary Player tried to hit his tee shot over the shamrock bunker on the left. He found the sand, and his shot out nearly hit Arnold Palmer. His third shot went into the trees and he made a double bogey in the ’74 U.S. Open.

The tee shot must stay short of a stream that crosses the fairway at about 295 yards. Most players will drive to the top of the hill. Playing just short of the stream leaves a downhill approach with a wedge. The fairway slopes severely down and to the left, and might send balls into the rough. The green is diagonally shaped with a false front and plenty of bumps and ridges.

Major moment: Bobby Jones’ slide in the final round of the ’29 U.S. Open was punctuated on this hole when he made triple bogey hitting into the trees, pitching out, going over the green, flubbing a chip and two-putting for 7. His six-shot lead was down to one shot, and he eventually wound up in a playoff.

This tends to play as the toughest hole on the back nine, demanding a long, precise tee shot for a realistic chance of hitting the green. The left side is protected by trees, including a large Maple short and left of the green. The front half of the green is very fast toward the front.

Major moment: In a steady rain, Davis Love III hit a majestic drive and a 6-iron to 10 feet for an easy par and essentially clinched his victory in the ’97 PGA Championship.

A dogleg right that requires precision with the tee shot and the approach. A left-to-right drive is ideal for a slanted fairway. The kidney-shaped green is very narrow, making it tough to save par with anything left or right of the green. A mound on the center right of the green greatly influences putting.

Major moment: Geoff Ogilvy chipped in for par from left of the pin in the final round. A par on the closing hole turned into a one-shot victory in the 2006 U.S. Open.

A sweeping dogleg to the left requires precision because anything too long and straight could go through the fairway into the rough. The complex green is one of the most demanding at Winged Foot. It is elevated, and extremely quick from back to front. Any approach short of the front ridge could end up at the bottom of the hill because of the 6-foot slope at the front.

Major moment: Bobby Jones holed a 12-foot par putt with about a foot of break to force a playoff in the ’29 U.S. Open, beating Al Espinoza by 23 shots over 36 holes the next day. The putt was so remarkable that members called the next day a “miracle playoff.” More recently, this is where Phil Mickelson and Colin Montgomerie made double bogey to finish one shot behind in the 2006 U.S. Open.