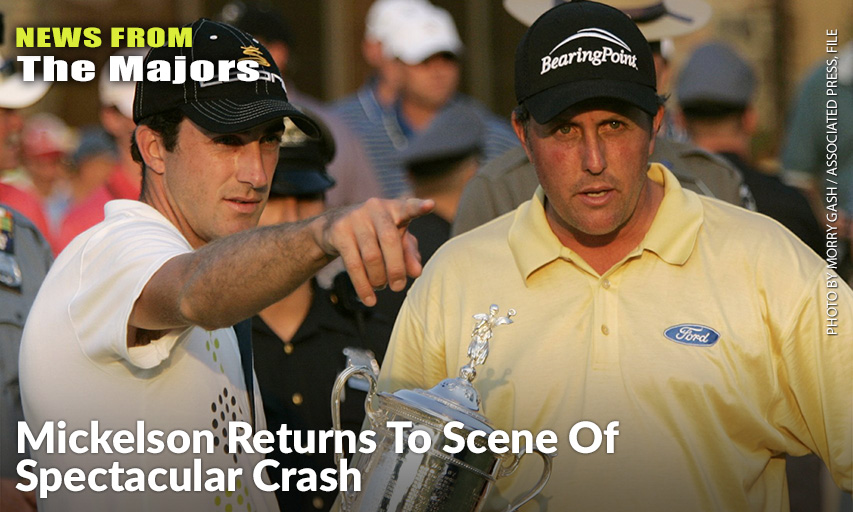 Whether it was at Winged Foot where Phil Mickelson lost his best chance to win the U.S. Open is up for debate.

It certainly was the most memorable, if not spectacular.

A tee shot off the hospitality tent that caromed into yellow grass that had been trampled by a week’s worth of spectators. A 3-iron that struck a tree. A shot that started between hospitality chalets and trees and hooked only far enough to catch a buried lie in the bunker left of the green. An explosion shot that raced off the green into 6 inches of rough.

A double bogey, turning his one-shot lead into another runner-up finish.

Mickelson crouched on the green when his hopes were gone, head in his hands. “I am such an idiot,” he said later, an endearing example of how for all his miscues, no one owns it like Mickelson.

He returns to Winged Foot 14 years later, still missing the final piece of a career Grand Slam, more realistic than ever.

“I would like to at least be competitive and give myself a reasonable chance,” he said at the Safeway Open, his final tuneup for a U.S. Open that has been moved to September. “I drove it very poorly all week at Winged Foot in ’06 and my short game was phenomenal. It was the best short-game week of my career. I need to strike it better.”

He thought back to Harding Park last month at the PGA Championship where he thought he hit the ball well, only to struggle on the greens.

“If I put it together, I think I can be competitive,” he said. “And that’s what I would like to do is have one or more good chances at it.”

Sure, Tom Watson was an 8-foot putt away from winning the British Open at age 59. Greg Norman was 53 when he took a two-shot lead into the final round at Royal Birkdale in 2008. That’s links golf. The U.S. Open is different, and Winged Foot has a history of being a beast.

Mickelson wasn’t the only player who regrets the final hour of that 2006 U.S. Open.

Colin Montgomerie also made double bogey on the 18th hole and finished one shot behind, and he was in the middle of the fairway, 172 yards away with a 7-iron in his hand and the most repeatable swing in golf. He chunked it so badly that Montgomerie was heard saying, “What kind of shot was that?”

Jim Furyk earlier had a 5-foot par putt on the last hole that he looked at from every direction before missing, leaving him one shot behind.

But this was Mickelson, who already had baggage at the U.S. Open and has since added to it.

Winged Foot was his fourth silver medal at the U.S. Open. He picked up another in 2009 at Bethpage Black, and perhaps his biggest opportunity was at Merion in 2013, when he twice made bogey with a wedge in his hand, from the tee box at the par-3 13th and from the fairway on the 15th.

“This was my best chance of all of them,” Mickelson said that day. “It really hurts.”

In all but two of those six runner-up finishes. the U.S. Open was remembered as much for Mickelson as the guy who won.

The exceptions were 1999 at Pinehurst No. 2, when Payne Stewart made a 15-foot par putt to win, and Bethpage in 2002 when Tiger Woods beat him by three.

There was 2004 at Shinnecock Hills, where Mickelson’s double bogey on the 17th hole paved the way for Retief Goosen. There was double bogey at Winged Foot, the misfired wedges at Merion. And there was Bethpage in 2009, when his wife was facing surgery for breast cancer and left him a note asking him to bring home that silver trophy. He was tied for the lead with five holes to go until missing par putts from 3 feet on the 15th and 8 feet on the 17th.

Majors are loaded with such moments.

Consider Jean Van de Velde and his stranger-than-fiction triple bogey on the final hole at Carnoustie, or Ed Sneed losing a three-shot lead with three holes to play in 1979 Masters with three bogeys. Arnold Palmer lost a seven-shot lead on the back nine to Billy Casper at Olympic in 1966.

Ben Curtis won in his major debut at Royal St. George’s in the 2003 British Open, mainly because Thomas Bjorn took three shots to get out of a bunker on the 70th hole.

The low score always win. Curtis offered as much when asked once if he won or Bjorn lost. “When I signed my card, it was for 72 holes, not 71,” he replied.

“At Winged Foot ... that was lost by multiple players,” Ogilvy said years later. “It’s the guy who’s still there at the end. (Nick) Faldo was the master of it. He often won them by not doing anything wrong. He never did anything wrong on the last nine holes, did he? That’s how you win. (Jack) Nicklaus won them like that. He just played, and everyone else, the difficulty of the course caught up with them.”

Mickelson at least gets another chance.

Even that was in doubt at the start of the year when it looked as though he might have to qualify. He said at Pebble Beach he would not ask for a special exemption, which a player of his stature would merit.

The COVID-19 pandemic shut down golf a month later, the USGA had no choice but to go to an all-exempt U.S. Open and it expanded the world ranking category from the top 60 to top 70. Mickelson was No. 61.

He has had two chances to win this year on the PGA Tour. The game is still there. But he hasn’t contended in a major since Henrik Stenson outlasted him in their remarkable duel at Royal Troon in the 2016 British Open.

Then again, it’s Mickelson, and there’s never any telling what he will do next.