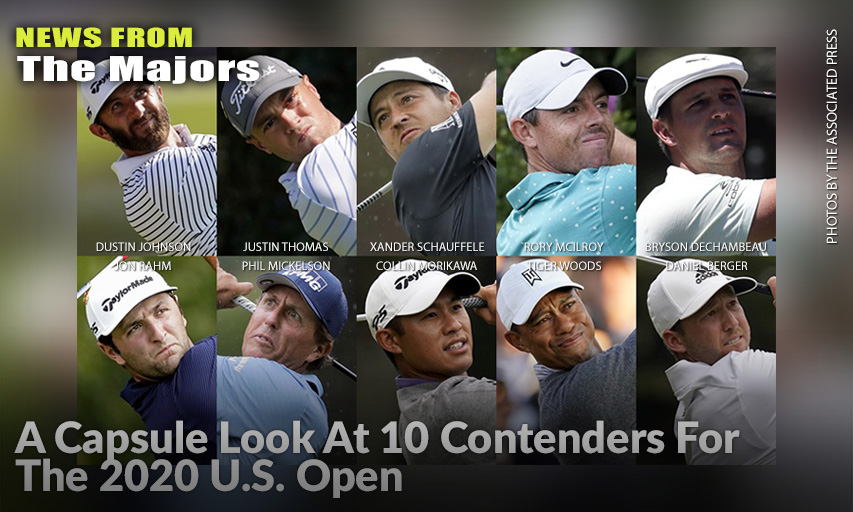 U.S. Open Memory: Having a 12-foot eagle putt to win in 2015 at Chambers Bay, three-putting to finish one shot behind Jordan Spieth.

Best of 2020: Playoff win at Sentry Tournament of Champions and winning his second World Golf Championship.

Backspin: He reached No. 1 in the world, albeit briefly, as further testament to his place as one of the game’s elite. His major record is lacking since winning the PGA Championship at Quail Hollow with only one top 10 in the eight majors since winning one.

U.S. Open Memory: Finishing double digits under par (10 under) to tie for fifth in his U.S. Open debut in 2017 at Erin Hills.

Backspin: He began the year by three-putting the 18th at Kapalua to fall into a playoff that Justin Thomas wound up winning. Much like Brooks Koepka, minus the trophies, has a reputation of showing up on the biggest stages. He has top 10s in six of the 12 majors he has played.

Backspin: He contended nearly every week from last October to March. Since the return from the pandemic, he rarely contended at all. Some of that was distraction of his wife’s pregnancy, some of that from not having energy from the fans. He has gone 20 majors since winning his last one.

Best of 2020: Breakfast, lunch and dinner. Along with his 6,000-calorie intake, winning the Rocket Mortgage Classic and making 350-yard drives routine.

U.S. Open Memory: Giving up his exemption as U.S. Amateur champion and qualifying for 2016 U.S. Open at Oakmont, and then tying for 15th.

Backspin: He has become must-see golf this year by adding 40 pounds of mass to fuel his 200 mph ball speed that has led to drives upward of 400 yards. His emotions still get the best of him, but his tie for fourth in the PGA Championship was evidence that his method is working. That was his first top 10 in a major.

Best of 2020: Winning at Memorial and his 65-foot birdie putt to beat Dustin Johnson in a playoff at Olympia Fields.

Backspin: When a career begins with multiple victories in each of the first four seasons, a major championship seems like it’s not too far behind. His patience will be tested at Winged Foot. Rahm showed dominance at the Memorial and resilience at the BMW Championship.

Best of 2020: Winning in his PGA Tour Champions debut.

U.S. Open Memory: Six silver medals as runner-up. The most shocking loss was at Winged Foot when he lost a one-shot lead on the final hole with a double bogey. Worse might have been Merion, when he twice turned birdie chances into a bogey with a wedge in his hand on the back nine.

Backspin: He needs the U.S. Open to complete the career Grand Slam, and this will be a stark reminder considering how it ended last time at Winged Foot. Even at age 50, he can’t be ruled out because he’s Mickelson. He said at the start of the year he wouldn’t ask for a special invitation. He got in when the USGA had to go to an all-exempt field and widened the world ranking category to top 70.

Best of 2020: Winning a playoff at Muirfield Village, winning a major at Harding Park.

U.S. Open Memory: Going from commencement at Cal to a tie for 35th in his U.S. Open debut at Pebble Beach last year.

Backspin: Just over one year removed from college, he has graduated into a star. Along with two victories, he lost in a playoff at Colonial. Everything about Morikawa is polished, from his swing to his attitude. Already with one major and three PGA Tour wins, this will be only his 32nd start as a pro.

Best of 2020: Very little, though he did get a top 10 at Torrey Pines in his first event by breaking par all four days.

U.S. Open Memory: Winning by 15 shots at Pebble Beach in 2000, regarded as the most dominant performance in major championship history.

Backspin: Winged Foot was the first major that Woods missed the cut in 2006, a month after the death of his father. His play in the majors has been uninspiring since his Masters victory a year ago in April. When he’s feeling good and his game is on, he’s still as good as anyone else and has the mind for majors.

Best of 2020: Winning playoff at Colonial, being noticed for not being in the Masters.

U.S. Open Memory: Being part of a four-way tie for the 54-hole lead at Shinnecock Hills in 2018, closing with a 73 and tying for sixth.

Backspin: One of the best players since golf returned, and doing well even before the pandemic. Along with his win at Colonial, he has finished in the top 10 in seven of his last 11 tournaments to go from outside the top 150 in the world to a career-best No. 13.