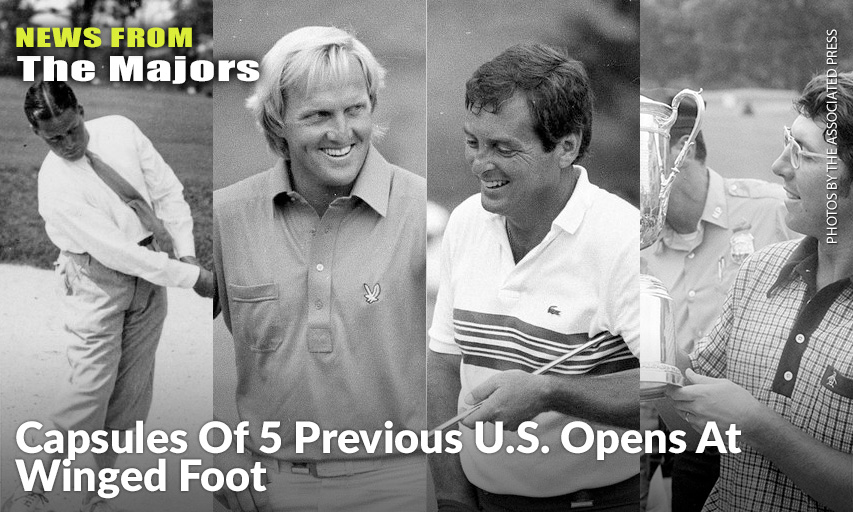 First-Place Cheque: $0 (Jones was an amateur).

Summary: Jones blew a three-shot lead in the final round and had two 7s on his card. Leading by four with three holes to play, he made triple bogey on the 15th and bogey on the 16th. He was in a bunker on the final hole and blasted out to 12 feet. He made the par putt to close with a 79 and get into a playoff with Espinoza, who shot 75. The playoff was 36 holes, and Espinoza had no chance. Jones shot 141 to win the playoff by 23 shots and collect his third U.S. Open title.

Summary: Casper won his first major championship by conquering the contoured greens of Winged Foot, one-putting the last four greens in the third round to build a three-shot lead over Ben Hogan, and finishing the week with 31 one-putt greens. Despite closing with a 74, he beat Rosburg by one shot. Hogan shot 76. Arnold Palmer and Sam Snead started the final round four shots behind but could not make up any ground. Most famous about Casper in this U.S. Open is that he laid up on the long par-3 third hole all four days and each time got up-and-down for par. Charlie Sifford played in his first major and tied for 32nd. Two years later, the PGA of America rescinded its Caucasian-only clause.

Summary: A year after Johnny Miller closed with 63 to win at Oakmont, it appeared the USGA was out for revenge. The greens were firm and fast, the rough was deep and par felt like birdie. The result was what became known as the “Massacre at Winged Foot,” with Irwin winning at 7-over par. Tom Watson had a one-shot lead going into the final round but shot 79. It was at Winged Foot in ’74 when Sandy Tatum, in charge of setting up the course for the USGA, delivered what has become a mantra for the U.S. Open. “Our intention is not to embarrass the greatest players in the world, but to identify them.”

Summary: Instead of a massacre, this U.S. Open is remembered more for a white towel. Norman erased a three-shot deficit on the back nine and saved par on the 18th hole with a 40-foot breaking putt. Zoeller was watching from the fairway, thought the putt was for birdie and waved a white towel. Zoeller made par to force a playoff, then buried the Shark the next day with a 67, winning by eight. Walking up the 18th together, it was Norman waving a white towel. It was the second major for Zoeller, and the first leg of the “Grand Slam Playoff” for Norman, the only player to lose all four majors in a playoff.

Summary: This turned out to be a major known as much for the player who won as those who didn’t. Geoff Ogilvy hit a beautiful pitch from the fairway and made a 6-foot par putt. Furyk had a 5-foot par putt on the final hole and missed. Two groups later, Montgomerie was poised to win his first major when he chunked a 7-iron from the middle of the 18th fairway and made double bogey. No one suffered like Mickelson. He had a one-shot lead in the final group when he sliced his tee shot to the left. Instead of pitching back to the fairway, he tried to hit 3-iron on or around the green. It hit a tree. His next shot plugged into the bunker, and he wound up with a double bogey to finish one shot behind. “I just can’t believe that I did that. I am such an idiot,” Mickelson said. It remains the only major he has not won.