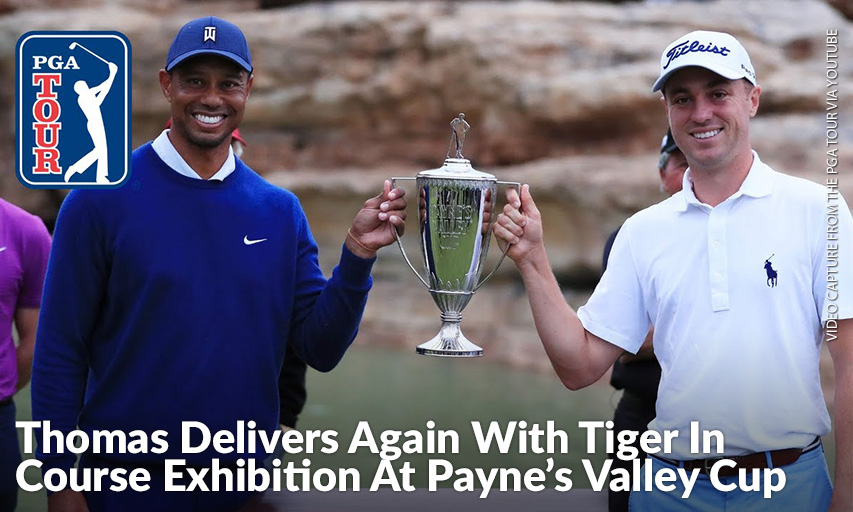 RIDGEDALE, Missouri — Justin Thomas won his six-hole singles match and was closest to the pin on the decisive final hole as he and Tiger Woods won an exhibition match that served as the grand opening of the Woods-designed Payne's Valley Golf Course at Big Cedar Lodge.

The televised event was called the Payne's Valley Cup, after the course Woods designed in the Ozarks. It was the first public course in the United States for Tiger Woods Design.

The money raised went to the Payne Stewart Family Foundation. The course at Big Cedar Lodge was named in honor of Stewart, who died in a plane crash in October 1999.

The match had a Ryder Cup theme because the matches were scheduled for this week until being postponed because of the coronavirus pandemic. Thomas and Woods, who partnered in last year's Presidents Cup, took on Rory McIlroy of Northern Ireland and Justin Rose of England.

McIlroy and Rose won the fourballs over six holes. Woods and Thomas won the foursomes on the next six holes. In the singles, Thomas defeated McIlroy, while Rose defeated Woods. The matches ended in a tie, and the Americans won because Thomas was closest to the pin on a par 3 designed to settle matches.

Jack Nicklaus and Gary Player also took part in the final hole, as did Aaron Stewart, the son of the late three-time major winner who now is a tournament director for the LPGA Tour's season opener in Florida.

The exhibition was two days after the U.S. Open at Winged Foot, where Woods and Rose missed the cut. McIlroy and Thomas finished in a tie for eighth, a dozen shots behind winner Bryson DeChambeau.

"It's what all of us needed after what we experienced last week," McIlroy said.