Norm Bradley Finally Wins His Big One In Dramatic Fashion 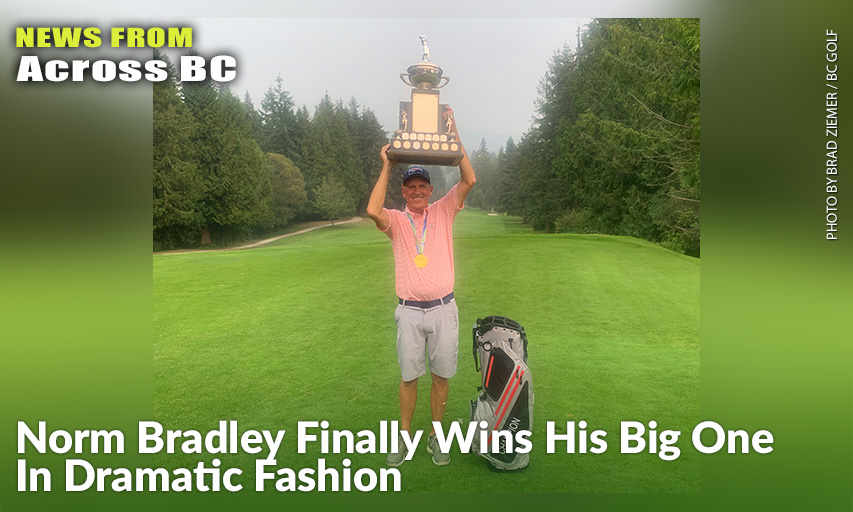 But no one could have possibly imagined it would be quite this hard.

For the first 16 holes of the final round of the B.C. Senior Men’s Championship, the 62-year-old Kelowna resident seemed to have it on cruise control. He stepped up to the 17th tee at Sunshine Coast Golf & Country Club with a five-shot lead.

But like Yogi Berra once said, it’s never over ’til it’s over.

That big lead evaporated when Bradley finished double-bogey-bogey and Mike Mannion of Gibsons birdied the final two holes to draw even.

Somehow, Bradley gathered himself to win the championship on the first playoff hole with a four-foot birdie putt.

After a lengthy hug from his wife Sherry and accepting congratulations from many of his fellow competitors, Bradley put his face in his hands and wept. This has been a long time coming for Bradley, who has been playing high-level amateur golf for pretty much his entire adult life. But he’s never been able to win the big one. Until now.

“It has been a long journey and I have put in lots of time and lots of effort and to see it finally pay off, even though it took an extra hole, is a really good feeling right now,” said Bradley, a retired teacher.

Bradley and Mannion, the reigning club champion and senior club champion at Sunshine Coast, both finished the 54-hole event at three-under par. Bradley joked afterward that the way he won the event will only help to make it more memorable. What a story he’ll have to tell his family and many friends in the B.C. golf community.

“To win after losing a five-shot lead is fabulous,” he said with a laugh. “It’s thrilling, just awesome.” It certainly didn’t seem awesome as he made the walk from the scoring area to the first tee for the playoff.

Bradley acknowledged having to gather himself after letting his big lead slip away. “I stood on the first tee and went, I still have an opportunity to win this thing,” he said. “I have played great for three days. I have played two playoffs this year in match play at our club (Kelowna Golf Club) and lost them both on the first hole. I said I am not losing this playoff. I just gutted it out.”

Both Bradley and Mannion left their second shots on the par 5 first hole just short of the green. Both then chipped their ball inside five feet. Mannion missed his and Bradley had his second chance. “When he missed, I went, wow, I can make this,” Bradley said. “Let’s end this now.” 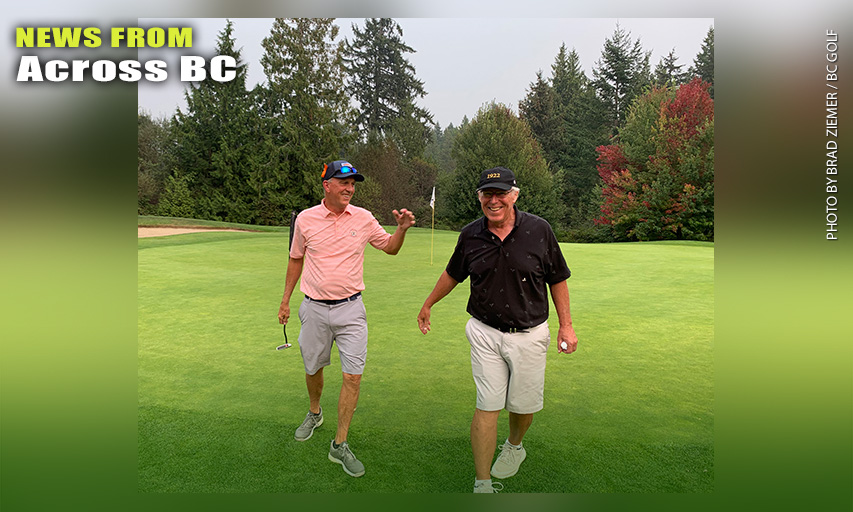 Norm Bradley's Good Friend Doug Roxburgh Was There To Congratulate Him After His Big Win.

And so he did. He drained his putt and when it dropped it unleashed lots of emotions for Bradley. His good friend Doug Roxburgh, a five-time winner of the event, was among the first to congratulate him on the green. Bradley said he is proud to have his name alongside so many of his friends, including the late Gudmund Lindbjerg, who have won the championship.

“To have my name on a trophy with Roxy’s name on it, Goody’s name and all the other guys who have won it means so much. I have always wanted that. I have always tried and have always come up short.”

Bradley’s troubles began when he put his tee shot on the short par 3 17th hole into the left greenside bunker. He left his first bunker shot in the sand, then blasted out and two-putted for a sloppy double. Mannion, meanwhile, sunk a long birdie putt and suddenly the five-shot lead was two.

“I knew Mike was going to finish strong because he had done that the last two days,” Bradley said. “But I quit on my 9-iron so I pulled it. I said I’ve got to get this out (of the sand) so I swung hard with a new wedge. It just went straight into the ground and I make a quick five.”

Mannion evened things up when he birdied 18 and Bradley three-putted for bogey. “At least I made you work for it,” Mannion said in congratulating Bradley after the playoff. “I have lost a tournament doing the same shot Norm did,” Mannion said. “I have made double out of that bunker myself.”

Mannion, who began the day one shot behind Bradley, shot an even-par 72 in the final round while Bradley closed with a 73. Len Carlow of Victoria finished alone in third at even-par after firing a one-over par 73.

Pemberton’s Lance Lundy tied for fourth with Harry Ferguson of Invermere at three-over par and won the Super-Senior Championship for players 65 and over. Lundy birdied four of his first five holes and shot a two-under 70 to beat Roxburgh by two shots for the Super-Senior crown.

“I was hitting it close and making some good putts for a change,” said Lundy, who dedicated his win to Lindbjerg, a four-time B.C. Senior Men’s champ who died earlier this summer.  “This is all about Gudmund Lindbjerg for me,” Lundy said. “He is my buddy. A lot of us are here because of Gudmund and his passing meant a great deal to all of us. I wanted to win the Super-Seniors for Goodie.”

A 54-hole best-ball competition was held in conjunction with the tournament. The team of Bradley and Lundy won with a score of 17-under par. That was two shots better than runner-ups Mannion and Ferguson. The net Stableford competition was won by Surrey’s Jim Zalusky with 114 points. Mannion was second with 108 points. 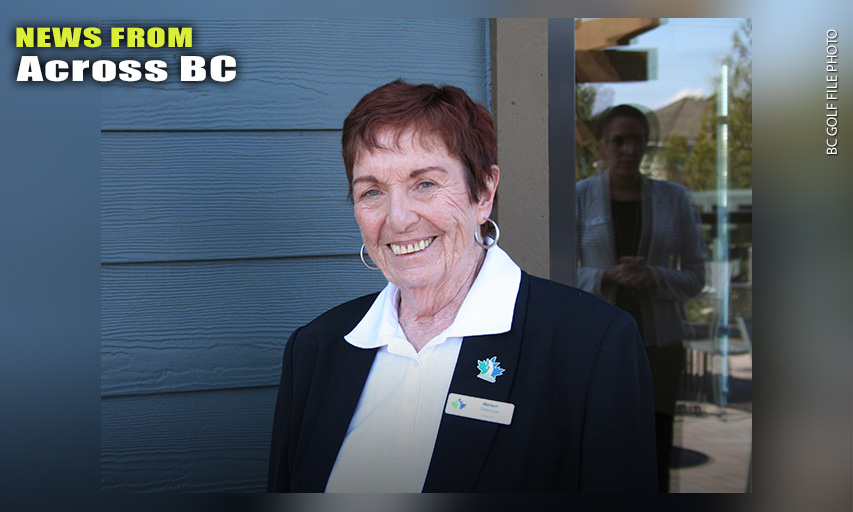 Helen Steeves Received The Distinguished Service Award (DSA) For Her Many Years Of Contributions To British Columbia Golf.

“Helen was interesting because she could be exasperating at the board table, but what she did bring to the association, which was important at the time, was kind of the history of how we got to where we were. It is pretty hard to forge a new path forward if you forget what got you to where you were. You need that mixture of old and new to create a better organization and Helen was that person.”

Steeves said the award was completely unexpected. “I was absolutely stunned,” Steeves said. “You do things, but you don’t think about it. You don’t keep track of what you do. You just do it because you like it. I was really surprised.”

CHIP SHOT: Next year’s B.C. Senior Men’s Championship is scheduled to be held at Bootleg Gap Golf Course in Kimberley.