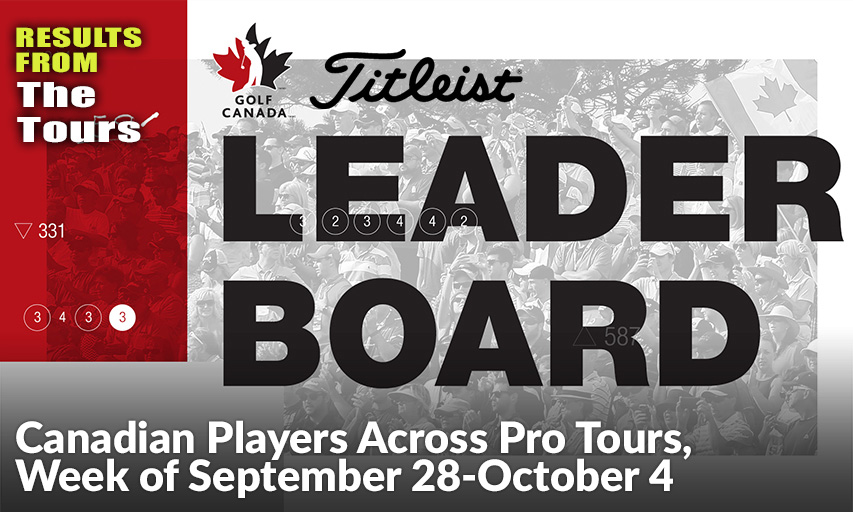 Sergio Garcia made birdie on the final hole for a one-shot victory in the Sanderson Farms Championship. It was his first win on the PGA Tour since 2017 and it marked the 10th straight year he has notched a win on any tour worldwide. Peter Malnati shot a career-best 63 but came up one stroke short of his second career PGA win – his first one coming five years ago at this event. …Corey Conners finished up with three birdies over his final five holes for his first top 20 result of the new PGA season and first since June 14, when the Tour resumed play. …After three birdies and two bogeys on the opening nine holes of his final round, Roger Sloan made nine straight pars on the back nine… Michael Gligic’s opening round 65 was his lowest of the year on either the PGA or Korn Ferry Tour

Evan Harmeling made a 10-foot birdie putt on the last hole and then made another birdie on the first playoff hole to beat Kevin Dougherty and win the Savannah Golf Championship. It was his first win on the Korn Ferry Tour. Doughtery had six birdies in 15 holes for a two-shot lead but dropped a stroke on the penultimate hole and missed a birdie putt for the win on 18. …All four Canadians entered missed the weekend cut. It was the first missed cut for Taylor Pendrith in his last 12 tournament starts.

Aaron Rai of England shot a final round 64 to get himself in a playoff before securing the win at the the Scottish Open on the first playoff hole when Tommy Fleetwood missed a 3-foot par putt. Rai’s victory comes one week after he lost a 54-hole lead and finished runner-up in the Irish Open. Robert Rock, who started the final round with a two-shot lead, bogeyed the final hole to finish one shot out of the playoff. …There were no Canadians entered in the event.

Mel Reid of England carded a final round 67 for a two-shot victory in the ShopRite LPGA Classic. It was her career LPGA title. Jennifer Kupcho, the former NCAA champion at Wake Forest who last year won the inaugural Augusta National Women’s Amateur, closed with two birdies for a 68 to finish alone in second. …Brooke Henderson notched her 51st career top 10 result and second in her last two starts. …Alena Sharp has scored par or better in nine of her last 13 rounds played.

Peiyun Chien of Taiwan was declared the winner after the final round of the Symetra Classic was cancelled when the course at LPGA International at Daytona Beach was deemed unplayable due to nearly two inches of rain having fallen. Chien had a one-shot lead over Lucy Li after 54 holes. She won for the second time this year on the Symetra Tour and moved to No. 8 on the money list. ...Maude-Aimee Leblanc recorded her best result on the tour since August 2019. …Since the tour resumed play, Maddie Szeryk has had just one top 15 result in six starts