PGA of BC Names Recipients Of Five 2020 Awards 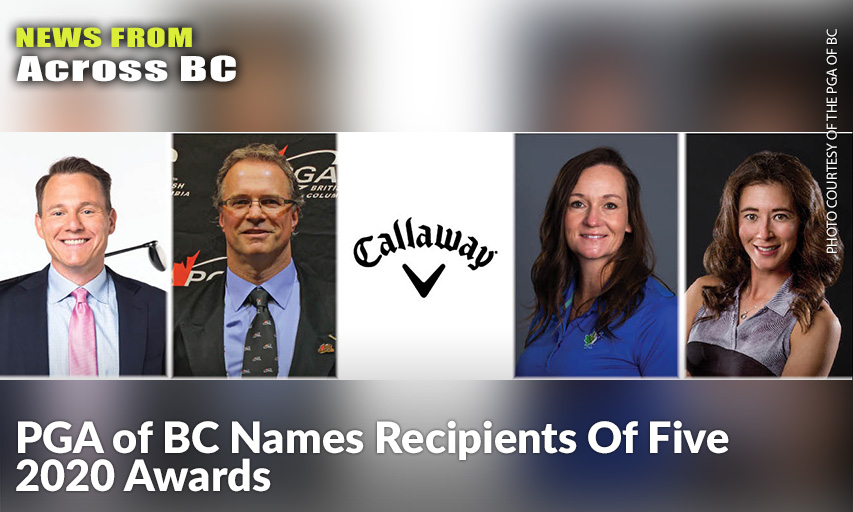 RICHMOND, British Columbia — The PGA of BC is proud to name three recipients of the Association's 2020 Awards, as well as this year's PGA of BC Community Leadership Bursary and Jim Gibson Scholarship beneficiaries. These awards are designed to recognize leaders in the golf community exhibiting qualities such as volunteerism, selflessness, passion, and dedication to the game.

These honourees, along with the recipients of 11 other Association awards, will be recognized during the 2020 PGA of BC Awards Celebration presented by Replay Golf Supplies & Tribal, which will be broadcast online at 12 p.m. PT on Wednesday, Oct. 14.

The Dunc Sutherland Distinguished Service Award presented by DGL Sports Enterprises Ltd. is awarded to a PGA of BC member who demonstrates exceptional commitment to the Association by supporting and promoting the Association's brand, events and initiatives. This year, the PGA of BC is pleased to present this award to Brian Schaal, Executive Professional at Copper Point Golf Club.

Schaal is one of the most respected members of the Association both provincially and nationally, evidenced by his selection as the PGA of Canada’s Dick Munn Executive Professional of the Year Award in 2019, in addition to receiving the PGA of BC’s corresponding provincial honour. Under his leadership as General Manager, Copper Point Golf Club was also chosen by PGA of BC members in 2019 as the province’s Golf Facility of the Year, due in large part to the club’s extensive community involvement. Year after year, Copper Point’s entire Professional staff places among the PGA of BC’s Top 100 Golf Professionals at Schaal’s encouragement, illustrating the importance he places on professional development and Association involvement. Schaal is a regular fixture at all PGA of BC events and championships, often travelling significant distance from the Kootenay region to participate in tournaments and seminars. Schaal also serves as President of the National Golf Course Owners Association Canada-BC Chapter Advisory Board. During a 2020 season that posed unprecedented challenges to the golf industry, Schaal’s advocacy in that role on behalf of golf facilities and Professionals played an important role in ensuring the sport could continue to serve the golfing public safely and with minimal disruption amid COVID-19.  Schaal becomes the first-ever two-time recipient of the Distinguished Service Award, having also been selected for the honour in 2016.

The Jim Gibson Patron of the Year Award is presented each year to a person, group of people or organization that demonstrates an exceptional contribution to the Association's initiatives. This year, the PGA of BC is proud to present this award to Callaway Golf Canada.

A Silver-level Preferred Partner of the PGA of BC, Callaway has been a longtime supporter of the Association, including as a co-title sponsor of the PGA of BC Pro-Assistant Championship since 2014. Callaway has also shown its commitment to the Association at a national level, stepping up to serve as a presenting sponsor of both the PGA Assistants’ and Head Professional Championships of Canada. Within British Columbia, Callaway’s dedicated team consisting of Andy Dexter, Dave Arnold and Ryan Worrall can always be depended upon to provide excellent service to their accounts and Staff Professionals throughout the province. Having also been presented with this award in 2008, Callaway Golf Canada is just the fourth organization or individual to be named Jim Gibson Patron of the Year multiple times since the inaugural award in 1992.

The Arv Olson Media Personnel of the Year Award recognizes a media member or organization that has made a significant contribution to the PGA of BC over the past year. This year, we are proud to present this award to Jay Janower of Global BC.

Without question, Janower is among the largest supporters of the PGA of BC and its member Professionals, frequently utilizing his platform as one of British Columbia’s most prominent sports journalists to highlight their efforts and accomplishments. In addition to featuring many of our Professionals’ success stories and competition results through his Global BC reports, Janower regularly encourages his thousands of social-media followers to support their local Golf Professionals and facilities, demonstrating an appreciation for the hard work and various roles served by PGA of BC members across the province. Since 2018, Janower has also been the Ambassador for the annual Golfathon for ALS, PGA of BC’s signature charitable initiative in partnership, which has raised more than $500,000 for the ALS Society of British Columbia during his years of involvement. Janower, who received the inaugural Arv Olson Media Personnel of the Year Award in 2014, joins Brad Ziemer as the only other two-time recipient of the honour.

PGA of BC COMMUNITY LEADERSHIP BURSARY

The PGA of BC Community Leadership Bursary recognizes an individual or member facility within the Association that demonstrates an extraordinary desire and passion to make a difference in the lives of others, setting an example of "giving back" with which all PGA of BC members are proud to be associated. This year, we are pleased to award this bursary to Predator Ridge Golf Resort Apprentice Professional Kyla Inaba.

Inaba was recently selected as the PGA of BC’s Interior Region Teacher of the Year in large part due to her efforts leading the Swing Like a Girl instruction program for women at Predator Ridge. Since taking the reins of the program from founder AJ Eathorne in 2019, Inaba has worked to make golf more fun and less intimidating while creating a community of women who come together through golf. Swing Like a Girl has broken down barriers and introduced dozens of women to the sport who would otherwise have never picked up a club. The program’s popularity and impact has been palpable, with Inaba’s “Starter” and “Improve” clinics – initially slated to run for five weeks only – morphing into season-long offerings due to demand. More than 100 women have participated in Swing Like a Girl programming in 2020 alone. Inaba intends to utilize the $1,000 Community Leadership Bursary to further her expertise in golf coaching and instruction to benefit her students and continue the momentum Swing Like a Girl has gained under her watch.

The Jim Gibson Scholarship is named in honour of the late Jim Gibson, a longtime supporter and Ambassador of the Association who was extremely dedicated to and well-versed in the game. The recipient of this scholarship exemplifies volunteerism and demonstrates a passion for furthering their education for their community's benefit. The PGA of BC is proud to award the 2020 scholarship to Jennifer Greggain, Class "A" Professional at Chilliwack Golf Club.

Greggain is known to many as an accomplished competitor at both the amateur and Professional levels, with three PGA of BC Women’s Championship titles among her impressive playing résumé. In recent years, she has re-dedicated her career path to high-performance coaching, making an impact guiding teams at the university, provincial and national levels. Selected as the PGA of Canada’s 2018 national recipient of the Jack McLaughlin Junior Leader of the Year Award, Greggain has also obtained her certification in the PGA of Canada’s Coaching New Competitors and Coaching Developing Players streams. She has also demonstrated significant volunteerism both locally and overseas, ranging from mentoring young adults in her community to medical and relief missions in developing nations. The Jim Gibson Scholarship, amounting to $1,000, will assist Greggain as she pursues her two-year master’s degree in High Performance Coaching and Leadership at the University of British Columbia.

We congratulate each of the above on their achievements, and look forward to recognizing them, along with other awards recipients during next week’s PGA of BC Awards Celebration presented by Replay Golf Supplies & Tribal. Click here to view a list of nominees in the remaining award categories.