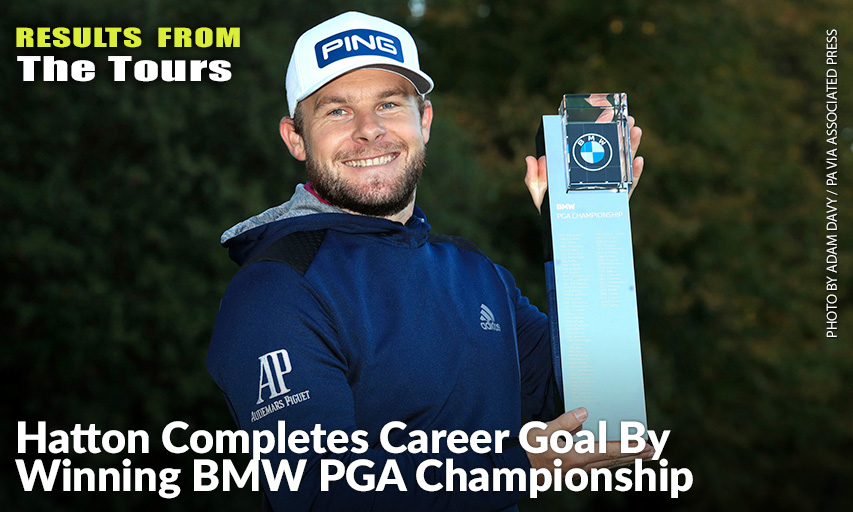 VIRGINIA WATER, England — Tyrrell Hatton held off a final-round challenge by Victor Perez to win the BMW PGA Championship by four strokes, giving the English player a first victory on home soil at a tournament that inspired him to become a professional.

Hatton shot 5-under 67 to finish on 19-under 269 overall, capping a week when he shot in the 60s every round around Wentworth's storied West Course.

It is the biggest win of his career, even topping his victory at the Arnold Palmer Invitational at Bay Hill in March that marked his breakthrough in the United States, where he has been playing for the past nine months either side of golf's hiatus for the coronavirus pandemic.

Hatton used to attend this tournament — the elite event on the European Tour — as a child, and recalled this week the time he came to Wentworth as a 5-year-old with his father and was nearly struck by an errant tee shot from Vijay Singh.

“It's unbelievable,” said Hatton, who acknowledged in a walkalong TV interview during the round that he was nervous. “This was a goal of mine, to win this tournament in my career.”

Hatton, who has sparked debate this week by wearing a hoodie, came into the final round with a three-stroke lead and was only really challenged by Perez, who moved into a share of the lead with Hatton after an eagle on the par-5 fourth hole.

Bogeys at Nos. 13 and 17 ended the challenge of the Frenchman, who didn't pick up a shot in his final six holes and shot 68.

Hatton gave Perez a glimpse of an opportunity by bogeying No. 13 — his only dropped shot of the round — but bounced back by making birdie on Nos. 15 and 18 to ultimately ease to the win.

Hatton was unaware of the state of play and almost sent his second shot on the 18th into the water.

“They had turned off the leaderboard on the 18th tee so I did not realize the position I was in,” Hatton said. “I was pretty nervous on the fairway and it’s the worst shot I’ve hit for a long time, probably the worst second shot by a winner in the history of this tournament, and I was very lucky it ended on the fairway.”

It is Hatton's third victory at a Rolex Series event and he is set to move into the top 10 in the world for the first time.

“Part of me is sad I didn’t get to experience the crowds, but it’s just amazing to win this trophy,” Hatton said. “There are a lot of fantastic players whose names are on the trophy and it’s a huge honor to add my name.

“To be in the top 10 was also a goal of mine and I am delighted they have come in the same week."