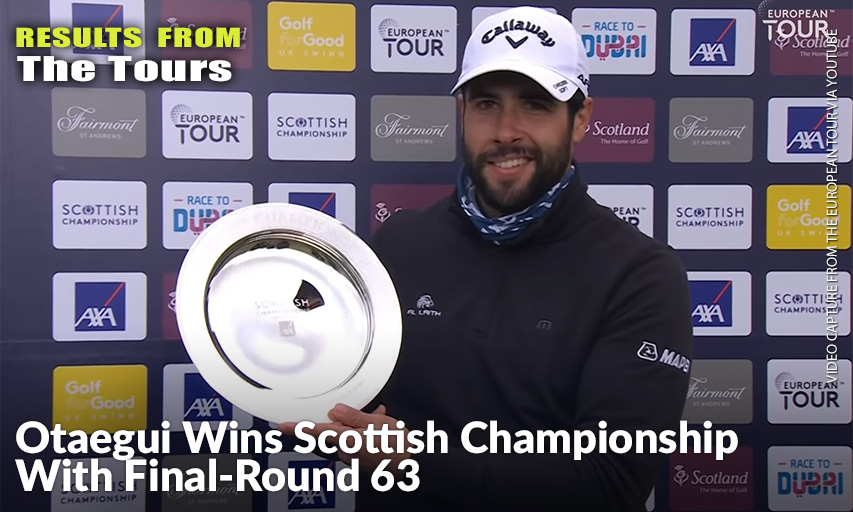 FIFE, Scotland — Spanish golfer Adrian Otaegui captured his first stroke-play title on the European Tour after shooting 9-under 63 in the final round of the Scottish Championship to win by four shots.

A hot streak of eight birdies in 11 holes from No. 5 saw Otaegui overhaul third-round leader Matt Wallace, who began the day with a three-stroke advantage but could only finish with a 71.

Otaegui’s previous two wins on the European Tour were match-play events – and one of them was in Scotland, too, at the Paul Lawrie Match Play in 2017. His other was at the Belgian Knockout the following year.

Otaegui started shooting 62 in the first round and almost matched that thanks to a remarkable display of putting, which included a long putt from off the green at No. 13 for one of his 10 birdies overall. That capped a run of three birdies, which he also had at Nos. 7-9 as he accelerated away from his rivals around the turn at Fairmont St. Andrews.

Otaegui was 23-under overall for the week.

Wallace shot 65-67-66 in his first three rounds but couldn’t replicate those performances as he sought his fifth European Tour title, and first since September 2018.

Wallace bogeyed No. 1 as Otaegui made birdie, and had lost his overnight lead by the time he dropped another shot at No. 8.

Aaron Rai, who won the Scottish Open at the start of the month, closed with a 66 to finish in outright third place.