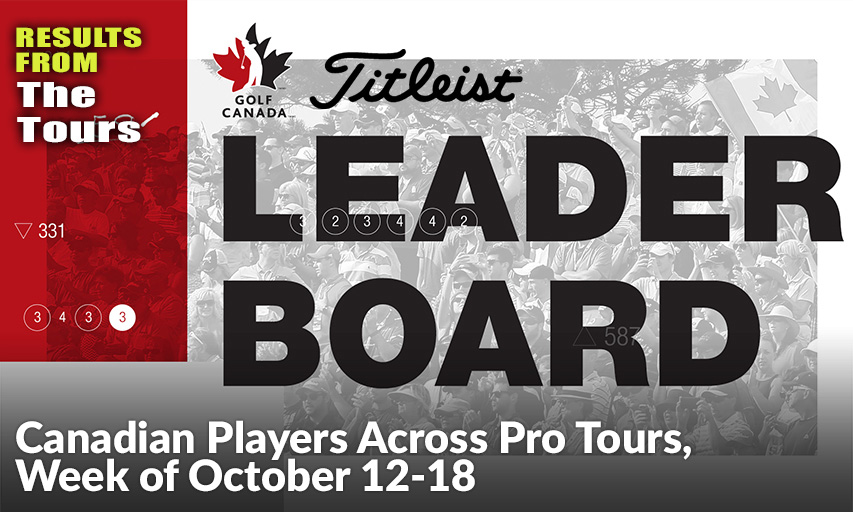 Jason Kokrak overcame a three shot deficit, matching the best round of the tournament with an 8-under 64 to win the CJ Cup at Shadow Creek. Kokrak fired off eight birdies for his first-ever PGA Tour victory in his 233rd start. Xander Schauffele finished two strokes back while Russell Henley, who began the final round with a three-shot lead, ended up tied for third with Tyrrell Hatton, who was coming off a victory last week. …Adam Hadwin posted his best finish of the 2021 PGA season and his first top 30 result going back to July. …Nick Taylor snapped a streak of two missed cuts with his best result of the 2021 season. …Corey Conners is a combined even par in four tournaments since the new season started.

Phil Mickelson won the duel of lefties over Mike Weir with a back-nine surge to claim the Dominion Energy Charity Classic by three strokes. Mickelson became the third player – and second this year – to win his first two starts on the tour for players 50 and older. After the first round was rained out, Weir shot 68-63 on a marathon day of golf Saturday to take a three-stroke lead over Mickelson into Sunday. For Weir it was his best finish on the Champions Tour and his third top-10 result in eight starts on the tour. IT also equalled his best finish on any competitive tour since the 2014 HP Byron Nelson Championship.

Spaniard Adrian Otaegui carded eight birdies over an 11-hole stretch for a final round 63 to win the Scottish Championship for his first stroke-play title on the European Tour. Otaegui’s previous two victories were match-play events. Third-round leader Matt Wallace was second, four shots back.  …Aaron Cockerill missed the cut for the first time in his last seven tournaments

Matilda Castren of Finland led from start to finish to claim the Mission Inn Resort and Club Championship, her first professional win on the Symetra Tour. Castren finished five strokes clear of Swede Linnea Johansson, who posted her career-best result on the development tour. …Maddie Szeryk, who equalled her low round of the season with a second round 68, posted her second best result of the year.