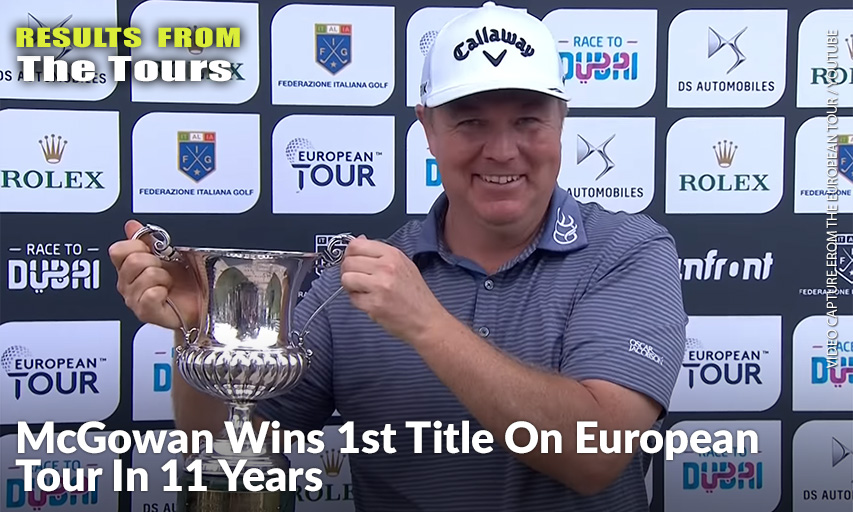 BRESCIA, Italy — English golfer Ross McGowan holed a bunker shot at No. 16 and rolled in a birdie at the last hole to earn a one-stroke victory at the Italian Open, securing his first title on the European Tour in 11 years.

McGowan struggled to keep his emotions in check after the final round, after seeing playing partner Laurie Canter miss his own birdie putt on the 18th that would have forced a playoff.

“My head is going full blast at the moment,” McGowan said. “I got the ball in the hole which in the past has been my nemesis, so it was nice to be able to do that this week.

“When I hit the bunker shot on 16, that came exactly how I saw it.”

McGowan, whose only other European Tour victory was at the Madrid Masters in 2009, shot 1-under 71 to finish on 20 under overall.

Canter, another Englishman, was looking to clinch a wire-to-wire victory but shot even-par 72 — his worst score of the week. He was the only player in the top 20 to not break par [in the final round], and was tied for second place with Nicolas Colsaerts (68).

“I just need to be happy with the finish,” Canter said. “It’s a good week and I played a lot of good golf and hopefully I am going to have a long career out here. But days like that obviously hurt. I’ll need to just think for a little bit, for a day or two, and reflect on what I didn’t do today. Hopefully I can have an opportunity to put it right.”

The European Tour withdrew Joachim Hansen from the final round after the Dane’s caddie tested positive for the coronavirus.