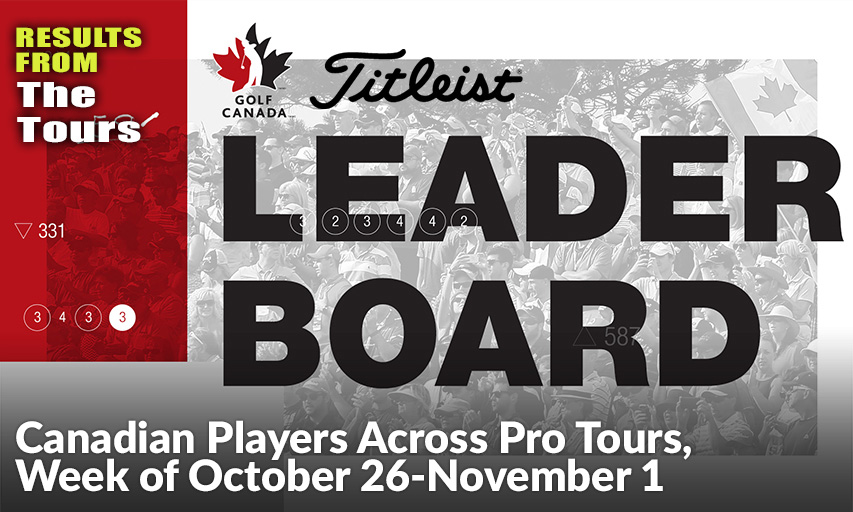 Brian Gay birdied the final hole to get him into a playoff, before winning the Bermuda Championship with a 12-foot birdie putt on the first extra hole. Gay won for the fifth time in his PGA Tour career. At No. 328 in the world, he is the fourth player outside the top 300 to win on the PGA Tour eight tournaments into the new season. Wyndham Clark missed a 10-foot birdie putt on the 18th hole which would have given him the win. David Hearn posted his first top 10 result of the season and it came at the same tournament a year ago Michael Gligic missed recording his first career top 10 result on the PGA Tour despite shooting a bogey-free final round 66. Roger Sloan notched his best result of the season and first top 20 finish since September 2019.

Callum Shinkwin finished birdie-eagle for final round 63, but still needed a birdie on the first playoff hole to beat Kalle Samooja at the Cyrus Open for his first European Tour title. Shinkwin was two shots behind with two holes to play but birdied the 17th and then holed from 50 feet for an eagle on the 18th to complete a back nine of 29. Aaron Cockerill posted his third top 20 result of the year and cashed his biggest career check on the European Tour (14,056 Euros)

Darren Clarke two-putted for birdie on the final hole for a one-shot victory in the TimberTech Championship, his first title on the PGA Tour Champions. Jim Furyk missed a 25-foot eagle putt and had to settle for a tie for second with Bernhard Langer who had bogeys on the 15th and 17th holes to scuttle his chances for victory. The PGA Tour Champions wraps up 2020 next week with the Charles Schwab Cup Championship in Phoenix, although the season will be extended to include 2021 because of tournaments lost from the COVID-19 pandemic. Mike Weir finished outside the top 25 for the first time in his last four starts

Ana Belac of Slovenia shot a final round 74 for a four-stroke victory at the Carolina Golf Classic. She moved to No. 2 on the money list, assuring she would be one of five players awarded LPGA Tour cards next year with one tournament remaining. Belac turned pro in the spring when her senior season at Duke was cut short by the coronavirus pandemic. Maude-Aimee Leblanc missed her first top 10 result in over a year by a single stroke Maddie Szeryk notched her third top 30 result of the year