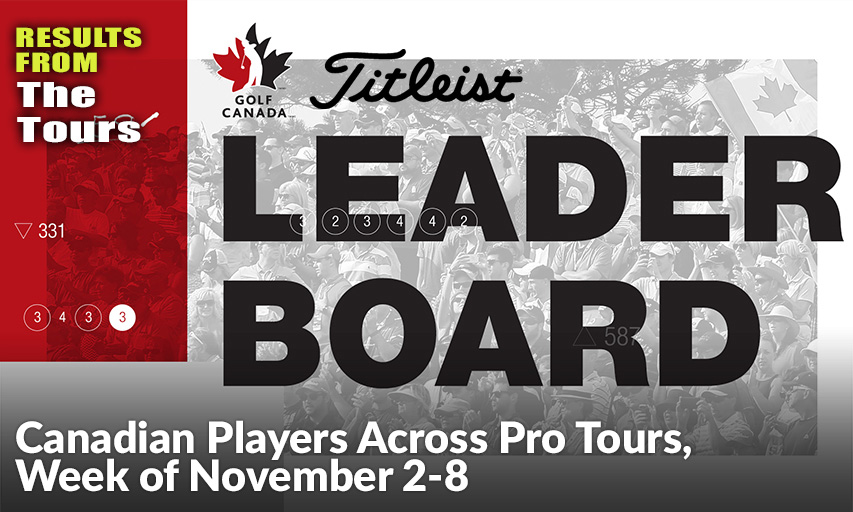 Carlos Ortiz holed a 20-foot birdie putt on the final hole for a final round 65 to hold off Dustin Johnson and Hideki Matsuyama to win the Houston Open. Ortiz became the first Mexican to win on the PGA Tour since Victor Regelado captured the Quad Cities Open in 1978. Johnson was making his first start since the U.S. Open after a positive test for coronavirus. …Mackenzie Hughes carded a 63 for the lowest final-round score of his PGA Tour career, besting his previous low of 65 in 2018. …Corey Conners’ second round 67 was just two shots off the clubhouse lead …Graham DeLaet was forced to withdraw after six holes in the second round, citing a back injury.

Scotland’s Robert MacIntyre birdied four of his last six holes to claim his first European Tour title in the Cyprus Showdown. MacIntyre missed a hole-in-one by inches on the 17th, settling for birdie and the outright lead before Japan’s Masahiro Kawamura birdied the 18th to move into a tie for top spot. MacIntyre calmly two-putted from 20 feet away to secure the victory. In a first-of-its-kind format on the European Tour, the field was cut to 32 and then 19 players after rounds two and three, with the scores reset to par for the final two days. … Aaron Cockerill’s second round 73 snapped a streak of six consecutive sub-par rounds

The final round of the season-ending Charles Schwab Cup Championship will conclude on Monday after Kevin Sutherland and Paul Broadhurst traded pars through six playoff holes in near darkness. Broadhurst erased a six-shot deficit with a bogey-free final round of 63 while Sutherland squandered a five-shot lead only to close with a birdie on the final hole to force a playoff. The tournament is the final official event of the year, but not the season. Due to the coronavirus pandemic and subsequent loss of tournaments, the 2020 and 2021 seasons will be combined and the Charles Schwab Cup winner will be determined next year. …Stephen Ames was just three shots off the lead after the first round. He posted his best result of the season since a tie for 9th back in February …Mike Weir was seven shots off the lead after two rounds.

Frida Kinhult of Sweden carded a final round 70 for a four stroke victory over Demi Runas at the Symetra Tour Championship and her first professional title. The win moved Kinhult into the top five in the Volvik Race for the Card, earning her LPGA Tour membership for the 2021 season and a spot in the 2020 U.S. Women’s Open next month. …Maddie Szeryk finished as the highest ranked Canadian in the Volvik Race for the Card at No. 48. …Maude-Aimee Leblanc finished 54th on the money list, the 7th best showing by a player who played five tournaments or less. …Brittany Marchand finished 74th on the money list