Streb Nearly Holes Out In A Playoff To Win At Sea Island; Conners Tied For 10th 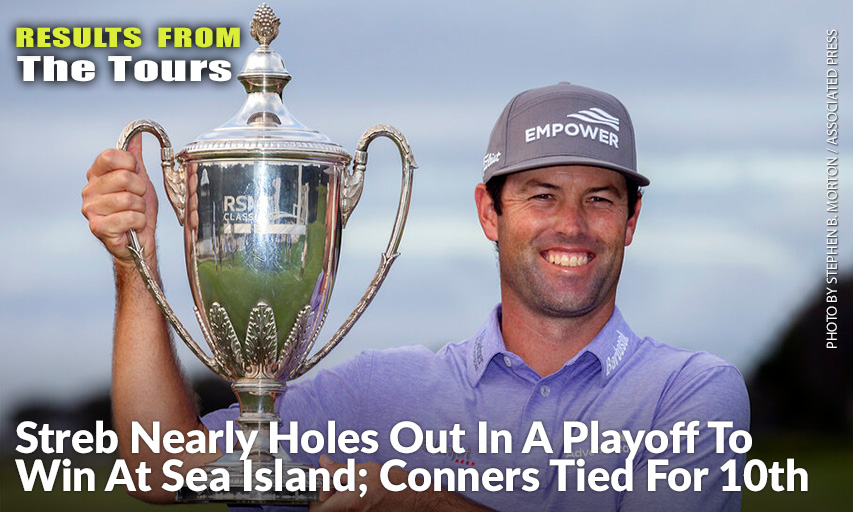 Those are the only similarities.

Six years after he had to rally from a five-shot deficit, Streb failed to protect a three-shot lead Sunday and felt the RSM Classic slipping away until piecing together three big shots to beat Kevin Kisner, none bigger than his final full swing.

His ball nestled in Bermuda rough on the second playoff hole on No. 18 at the Seaside course, Streb had to rely on a good guess and a soft bounce. He got both. His pitching wedge from a flier lie 158 yards away was perfect in flight, landed softly and came within an inch of going in.

That left him a tap-in birdie to cap off a wild final hour that changes everything for Streb — a check worth nearly as much as he made the last two years, a return to the Masters and a PGA TOUR exemption through August 2023.

“We were planning on the ball kind of knuckling out of there and jumping,” Streb said. “You're kind of at the mercy of whatever you get and it came out really well. I was just hoping it would land soft, and obviously it just worked out as good as you could hope for.”

Streb was one shot behind until his 6-iron on the par-3 17th took a good hop to 12 feet away for a birdie that allowed him to catch Kisner and closer with a 2-under 68.

Kisner, who won at Sea Island in 2015 for the first of his three PGA TOUR titles, closed with a 63 and had a 15-foot birdie putt on the 18th in the first extra hole that narrowly missed. Streb had to make an 8-footer to extend the playoff, and he ended it with one swing.

Kisner's tee shot was buried in deep rough, leaving him little chance of holding the green. He saw where Streb hit his pitching wedge and knew he had to hole his long chip, which raced 20 feet by the hole. He made it for a meaningless par.

“Once I heard the crowd, I was pretty much toast,” Kisner said, who dropped to 0-4 in individual playoffs. “Hats off to Robert. He hit a heck of a shot on 18 and he's a deserving champion.”

Corey Conners of Listowel, Ont., finished tied for 10th after firing a 64 during the final round.

The victory came at just the right time for Streb, who had to return to the Korn Ferry Tour Finals more than a year ago just to regain full status on the tour. Because of the COVID-19 pandemic that shut down golf for three months, no one lost his current status. Streb missed out on the PGA TOUR postseason again, but kept his card.

He was hopeful of getting into the Mayakoba Golf Classic in Mexico in two weeks. Now he's fully exempt for the rest of this season and the next two. He starts his year on Maui in the Sentry Tournament of Champions. He's in The Players Championship, the Masters, the PGA Championship.

“It’s been some ups and downs, a lot of downs and a few good bright spots here and there,” he said. “The way things shook out with COVID, them extending everybody’s status was really nice. They could have sent me right back to the Korn Ferry Finals, but it shook out really nice. Then going to Maui and Augusta is pretty awesome.”

In 11 tournaments of the new season, Streb is the fifth winner to be ranked outside the top 300 in the world.

Kisner did well to get in the playoff after starting five shots back. He made five birdies in 10 holes, including a pitch from thick rough in the middle of a sandy waste area to tap-in range on the par-5 seventh. He caught Streb with a 6-foot birdie on the 13th hole, and stayed in the game with an 18-foot par putt from the fringe on the next hole.

Streb missed a pair of 5-footers on the back nine, but he delivered the key shots when he needed. The one he'll remember is the pitching wedge he nearly jarred that gave him the victory.