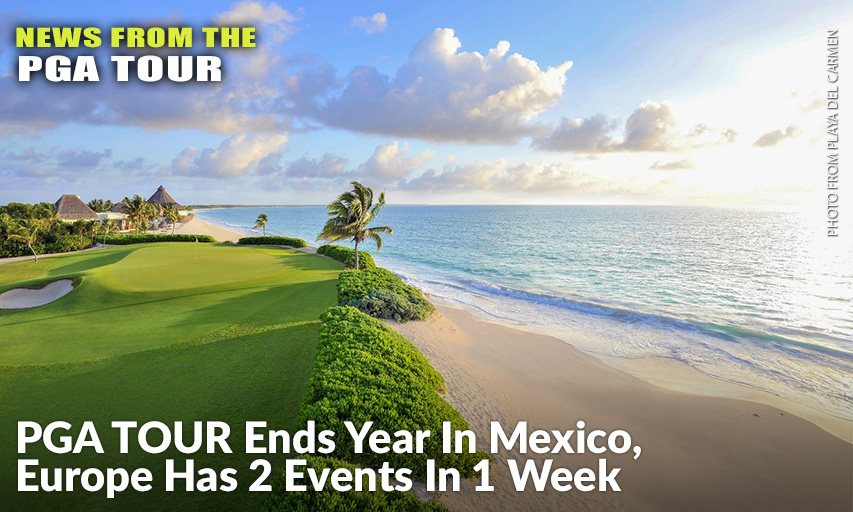 Notes: Dustin Johnson had committed to play before winning the Masters. He decided to withdraw late last week. ... Justin Thomas is playing this event for the first time since his rookie season six years ago. Thomas (No. 3) is the only player from the top 10 in the world. ... The field also includes four-time major champion Brooks Koepka, Rickie Fowler and Harris English. ... Ryder Cup captain Steve Stricker is playing his first regular PGA Tour event since the Memorial in July. Stricker most recently played in the U.S. Open in September. ... Carlos Ortiz of Mexico is playing for the first time as a PGA Tour winner. He won the Houston Open a week before the Masters and did not play at Sea Island. Ortiz and Abraham Ancer give Mexico two players from the top 75 in the world. When the tournament began in 2007, there were no Mexicans among the top 200. ... Joaquin Niemann is donating his entire prize money and $5,000 for every birdie ($10,000 for eagles) to help pay for a drug for his 2-month-old relative in Chile. ... Former U.S. Amateur champion Andy Ogletree, the low amateur at the Masters, makes his pro debut on a sponsor's exemption.

Notes: This is the first of back-to-back events in Texas, with the U.S. Women's Open to follow at Champions Golf Club in Houston. ... Jin Young Ko, the No. 1 player in women's golf, is playing for the second straight week. She tied for 34th two weeks ago in her first LPGA Tour event of the year. ... Jeongeun Lee6, the defending Women's Open champion, also is in the field. ... Six of the top 10 in the world ranking are playing this week. Among those missing are Danielle Kang, Nelly Korda and Brooke Henderson. ... So Yeon Ryu is playing her first U.S. event on the LPGA Tour since the season-ending CME Group Tour Championship last year. Ryu is a past U.S. Women's Open champion. ... Cheyenne Knight won her first LPGA Tour event last year at Old American. She has had only two top-10 finishes since then. ... The tournament dates to 2013. Inbee Park is the only player to win more than once.

Notes: The tournament is co-sanctioned by the European Tour, which created a new event for this week in Dubai. ... The South African Open dates to 1903, making it the third-oldest national open behind the British Open (1860) and the U.S. Open (1895). ... Gary Player holds the record with 13 victories over a span of 25 years. ... Dylan Frittelli is playing his national open for the first time since 2018. It was held last season in January 2020, and Frittelli was eligible for the Sentry Tournament of Champions at Kapalua. ... This is the final event before the top 60 qualify for the DP World Tour Championship in Dubai. Among those on the bubble is Dean Burmester at No. 62. ... By winning last week, Bezuidenhout moved to No. 41, giving each European-sanctioned event this week a player from the top 50. Bezuidenhout also virtually locked up a spot in the Masters next April.

Notes: The tournament was added to the schedule to create back-to-back weeks in Dubai ahead of the season-ending DP World Tour Championship, also held at Jumeirah Golf Estates. ... This is among 15 tournaments that was not part of the European Tour schedule at the start of the season. ... Bernd Wiesberger of Austria is the only player from the top 50 in the field. ... Also playing is Robert MacIntyre of Scotland, who will try over the next two weeks to crack the top 50 in hopes of getting into the Masters next year. ... Former major champions Danny Willett and Martin Kaymer are playing.