Thomas Sees Room For Improvement After Another Strong Year 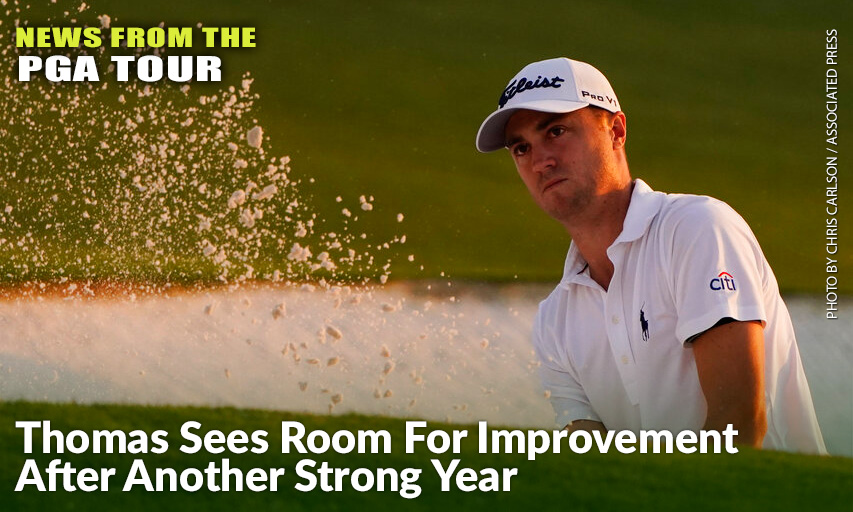 Justin Thomas has ample reason to see the glass as more than half-filled, except that he plays golf for a living. The glass is never full enough to satisfy an elite golfer.

Consider his year going into the Mayakoba Golf Classic.

He won the Sentry Tournament of Champions and he added a second World Golf Championship title at the FedEx St. Jude Classic. That's four consecutive years of winning multiple PGA TOUR events, the longest such streak since Tiger Woods and Phil Mickelson from just over a decade ago.

But Thomas can't stop thinking about losing a three-shot lead with three holes to play at Muirfield Village in the Workday Charity Open. Or the 54-hole leads he had at the Zozo Championship at Sherwood last month and the Mexico Championship in February.

“That's spoken like any golfer. I think it's always easier to look at the failures, or look at the things that went wrong, because that's what I'm able to build on and learn from,” he said Tuesday.

“It was weird because I really feel like I’ve done a great job of closing golf tournaments or playing well with the lead and doing well, but for some reason this year, I didn’t do that,” he said. “I just didn’t hit the shots I needed to, I didn’t perform the way I should have.”

But here's where the glass start to fill. Thomas figures he was close to having a monster year. It's asking a bit much to suggest he should have converted all those chances. He won at Kapalua only after Xander Schauffele three-putted for par from just off the 18th green.

Even so, he's not backing off his belief that winning eight times or more is feasible even in this era of depth. Woods (three times), Vijay Singh and Johnny Miller are the only players to do that in the last 50 years.

“I fully believe and think that’s possible,” Thomas said. “I understand in this day and age it is very difficult. I still see no reason why someone can’t win, eight, nine, 10, 11 times in a season. ... I was a couple rounds away in a short season from winning five or six times. But again, I was a couple shots away from not winning a couple times. It's how golf is.”

Paul Casey wanted no part of the Saudi International when it made its debut in 2019. He noted his sponsorship of UNICEF (the logo is on his golf bag) and told a British newspaper that “I would be a hypocrite” to take appearance money to play the event.

So his commitment to play it in January stood out more than those of Masters champion Dustin Johnson and U.S. Open champion Bryson DeChambeau.

Casey released a statement saying that his decision was not taken lightly, and two Ladies European Tour events last month contributed to him going.

“I wasn’t comfortable going in the past, but I have always been open-minded and willing to learn,” Casey said. “I believe sport has the power to (effect) change. I’ve listened to the Saudi’s commitment to this and their vision for the future. They have successfully hosted two professional ladies tournaments which shows that Golf Saudi have big plans not only for professional golf, but more so for grassroots and the next generation.

“It is always better to include rather than exclude when eliciting change, thus I hope my participation will make a difference and I am looking forward to seeing these changes in person.”

And he can't afford to lose to an 11-year-old, either.

Also in the field is Tiger Woods and his son, Charlie, who according to Thomas was the impetus for Woods playing.

“Tiger and I talked about it a bunch. He brought it up a while ago that Charlie wanted to play and Charlie really wanted to play with us,” Thomas said Tuesday. "For some reason, Charlie just always wants to beat me, it doesn’t matter what it is. Although he’s never beaten me in golf or a putting contest, he still talks trash just like his dad. It will be fun.

“We’ll have that like inner tournament within a tournament, trying to shut his little mouth up, but it will be fun.”

Still to be determined is whether Team Thomas and Team Woods are in the same group. One last father-son team is still to be announced for the 20-team field Dec. 19-20 in Orlando, Florida.

Rickie Fowler has plenty riding on his performance this week in the Mayakoba Golf Classic, starting with an assurance of playing in the Masters for the 11th straight year.

Fowler is among four players on the bubble for finishing the year in the top 50 in the world ranking, a qualification for getting invited to the Masters. With a strong field at Mayakoba, and two weeks left on the European Tour schedule, he needs points to avoid falling out of the top 50 by the end of the year.

Fowler, who started the year at No. 23, is at No. 49. Just outside the top 50 are Kevin Streelman, Chez Reavie and Russell Henley, all playing Mayakoba. And then there's Will Zalatoris, who can move up the ranking more quickly with fewer tournaments on his ledger. He is at No. 60.

For those who finish the year outside the top 50, Augusta National also takes the top 50 from the ranking a week before the Masters. Even so, that's one invitation that is nice to have in hand before the new year starts.

The Farmers Insurance Open is the latest PGA TOUR event to announce it will not have fans; it is at Torrey Pines in San Diego on Jan. 28-31. ... Jon Rahm said on Instagram he and his wife, Kelly, are expecting their first child. ... The USGA has nominated to its 15-member executive committee Chuck Brymer, chairman of DDB Worldwide; Cathy Engelbert, WNBA commissioner and former Deloitte CEO; and Anthony Petitti, president of sports and entertainment for Activision Blizzard. The election is Feb. 26 at the annual meeting. ... The PGA TOUR has decided to extend by one year the 16-man Player Advisory Council.

Harris English has gone from No. 183 at the start of the year to No. 33 without having won a tournament.

“The first two days it was almost scary waking up thinking like it was all a dream.” — Carlos Ortiz on his winning his first PGA TOUR event, the Houston Open.