Westwood Is Europe’s No 1 Again After Dramatic Dubai Finish 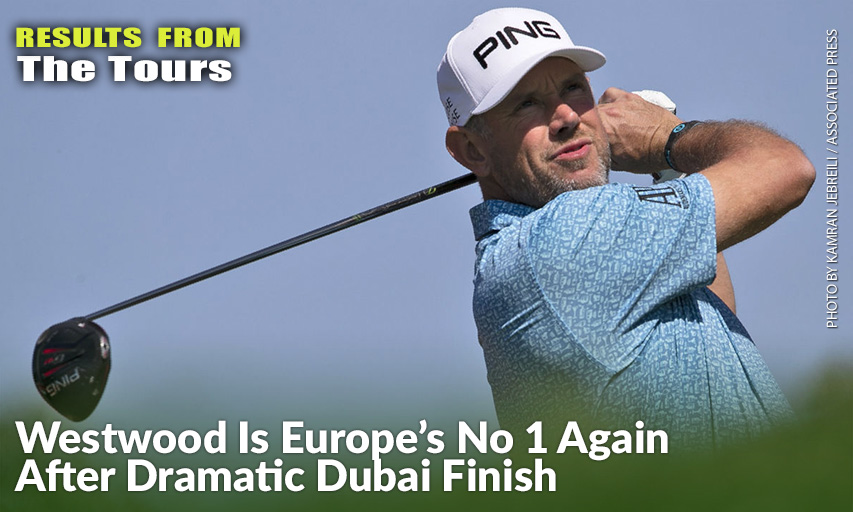 As Matt Fitzpatrick lined up a short putt to win his second World Tour Championship, Lee Westwood was embracing his fiancée in the scoring tent in celebration of a notable achievement of his own.

Moments earlier amid a dramatic end to the most bizarre of years on the European Tour, Westwood — at the venerable age of 47 — had been confirmed as the oldest winner of the season-long Race to Dubai title.

He would be finishing a season as the tour’s No. 1 player for a third time in his career, 20 years after the first. And, soon, he’d be hoisting the giant Harry Vardon Trophy high, despite having a sore back that nearly forced him to withdraw at the start of the week.

“I got my back back to pretty decent,” Westwood said with a smile. “Now I’ve had to lift that massive trophy and strained it again.”

It was worth the pain.

In what turned into a suspenseful final round in the season-ending event at Dubai's Jumeirah Golf Estates, Fitzpatrick birdied the first four holes and held on grimly on the back nine to shoot 4-under 68 and win the World Tour Championship by one stroke from Westwood.

Westwood also shot 68 after getting up and down from a greenside bunker for birdie at the last hole, which left him in contention to win the Race to Dubai title at the expense of Fitzpatrick and Patrick Reed — the former Masters champion looking to become the first American to be the European Tour’s No. 1.

Westwood needed a collapse from some of his rivals over the final holes on the Earth Course, and that’s what transpired.

Reed would have been Race to Dubai champion by finishing in outright third place or higher, but bogeys at the 16th and 17th saw him lose out. Still, chipping in from the fringe at No. 18, Reed shot 70 and finish tied for third with Viktor Hovland (69), ultimately two shots behind Fitzpatrick.

That left Laurie Canter, playing in the final group with Fitzpatrick, as the only player who could deny Westwood outright second place. However, Canter pulled his tee shot at the par-3 17th and required two shots just to get the ball up the bank and onto the green.

The Englishman made double-bogey there and only parred the last, when he needed eagle to finish alongside Westwood.

Westwood was watching the action unfold on TV from inside the scoring tent next to his caddie, fiancée Helen, when he was confirmed as Race to Dubai champion. They hugged each other, their emotions partially covered by the fact they were wearing face masks.

He is five years older than the previous oldest winner — Colin Montgomerie, who was 42 when he won the last of his eight titles in 2005 — and ended up triumphing by a measly 17.8 points from Fitzpatrick.

“The most satisfying thing is doing it under pressure when it matters,” Westwood said. “You know, coming out this week knowing nothing but a win or second will do, and pulling it off, really.”

Westwood won what was formerly known as the Order of Merit title for the first time 20 years ago at Valderrama, and again in 2009 in Dubai.

A former top-ranked player, Westwood is renowned for being one of the greatest golfers never to win a major but there’s no doubting his status as an elder statesman on the European Tour.

Still a champion, too.

And now, he was reminded, with a great chance of securing a place in the European team for next year’s postponed Ryder Cup at Whistling Straits. It would be his 11th appearance in golf’s biggest team event.

“The Ryder Cup would be great if I got in again,” Westwood said, before hesitating. “I would love to play again but at some point I’m hoping the captaincy will be offered to me. I would love to do that.

“At certain times, you’ve got to move into different chapters of your life. It’s nice to watch these young kids play, they tear it up out there. I enjoyed the Ryder Cup last time out when I was vice-captain. It’s a lot less pressure than having to hit the greens and hole the putts yourself.”

The baby-faced Fitzpatrick is one of those young guys, with the 26-year-old Englishman now a two-time winner of the World Tour Championship by backing up his victory in 2016.

“All I was bothered about this week was winning,” Fitzpatrick said. “I turned up obviously 16th, so the Race to Dubai didn’t really enter my head, if I’m honest.”

It was a spectacular finish to a season that saw the European Tour suspended between March and July because of the coronavirus outbreak. Once play resumed, 27 events were held back-to-back, with players having to live and perform in bio-secure bubbles.

The first of those 27 events was the British Masters, hosted by Westwood in northern England.

“It didn’t look good for a period of time there, and we played every week pretty much,” Westwood said. That’s a phenomenal achievement with what’s going on to get those tournaments on."