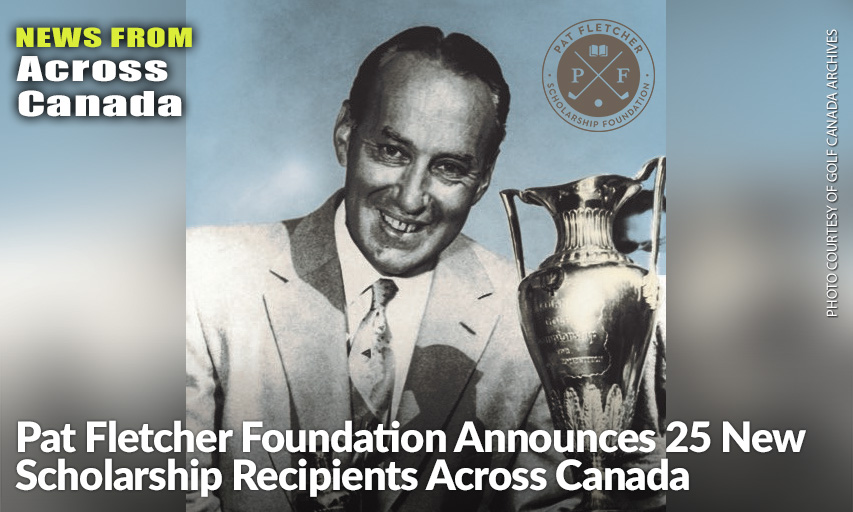 TORONTO, Ontario — The Pat Fletcher Foundation, whose purpose is to provide financial assistance to deserving young Canadian students on their journey to obtaining a university degree, announced recently the awarding of 25 new scholarships from across Canada.

“We are so proud of this year’s recipients. They demonstrated leadership and character in their submissions, and we wish them the best of luck as they head back to university and college this fall,” said Ted Fletcher, Founder and Chairman of Mint Green.

“These are outstanding young people – hard-working, well-rounded leaders in their communities. They share our desire of “making a difference” and we are proud to have played a small role in helping to shape their future.”

Since establishing the Foundation in 1985, The Pat Fletcher Foundation has awarded 543 scholarships, for a total of approximately $750,000 to young Canadian golfers – giving them the opportunity to develop and reach their highest potential.

The scholarship recipients include students from every province in Canada who go on to pursue their education at top schools both in Canada and the U.S.

“While my father was always very passionate about the sport of golf, he was equally passionate about the importance of education. He took a genuine interest in working with junior golfers to help them reach their full potential, both on and off the golf course,” said Ted Fletcher, who continues to administer the Foundation, along with a board of trustees.

About Pat Fletcher
Pat Fletcher was born in 1916 at Clacton-on-Sea, England and immigrated to Victoria, British Columbia in 1920. He was a leader in all aspects of professional and amateur golf. As a player, teacher and administrator, his contribution to the sport was outstanding. His playing career was highlighted by several major victories, including the 1952 C.P.G.A. championship and the 1954 Canadian Open. During his lifetime, Pat taught amateurs and professionals of all ages and levels of ability throughout Canada. He held professional appointments at many of Canada’s premier golf clubs, was president of CPGA from 1962 through 1965 and had an honorary membership bestowed upon him from the PGA of America.