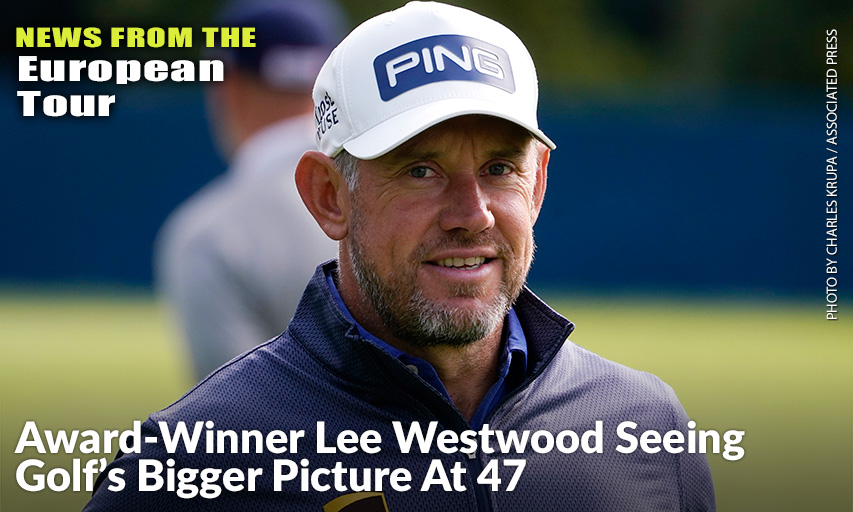 It’s not just the pandemic that has given Lee Westwood some perspective in this most strangest of years in golf.

It’s the person carrying his bag, too.

“When I start to get carried away with myself — you know in the majors and stuff like that — she says it’s just another walk around a big green field, really,” Westwood said of his fiancee, Helen Storey, who also happens to be his caddie.

“It’s the sort of thing I need, to simplify everything. Because that’s what it is, just another green field.”

Such an outlook is doing wonders for a former top-ranked player who, at the age of 47, is showing no sign of slowing down.

Westwood was voted as the European Tour’s golfer of the year for the fourth time, a week after finishing the season as the Race to Dubai champion — formerly known as the winner of the Order of Merit — for the third time in his career and 20 years after the first.

OK, a major title is still missing from Westwood’s resume — he is near the top of the list of the best golfers to have never won one — but he has done pretty much everything else in a 27-year pro career that he sees extending into his 50s.

“At the end of the day, it comes to just loving the game,” he said on a video call. “I have had eight days without hitting balls and I’m itching to go hit balls now.

Though the Englishman sees the bigger picture now — he says his weeks off going to horse racing’s Cheltenham Festival, skiing in the Alps, or on a short break with Helen are just as valuable — Westwood also remains a hard worker.

The outbreak of the coronavirus, which brought about a three-month pause to the golf season, allowed him to spend more time working on his fitness in the gym. Keeping and staying fit has become a big part of Westwood’s life.

“I love working hard,” he said. “I guess it’s part of my upbringing with my mum and dad. Coming from where I did in Worksop, being a working-class lad. I went to see my careers’ officer at 16 and the options he gave me were the Batchelors Pea factory or the sandwich factory.

“I fancied being a golfer a little bit more so I worked hard at it.”

Now he’s approaching 50, still winning big tournaments — his victory in Abu Dhabi in January ensured he is the only active golfer to be a title-winner in four separate decades — and still riding high in the world ranking, at No. 36.

That gains him entry to all the World Golf Championship events and he’ll be back at the Masters in April, too, in his latest bid for a major.

“You can’t turn up at major championships and say, ’I’m going to win this week.’ You turn up and say, ’I’ve done all the preparation I could do,” he said. “I’ve ticked every box, I’m in the best shape I could be in, the best frame of mind.’ Then hit it. It’s as simple as that.

“The build-up to the Masters doesn’t start with the run of tournaments up to it in March. It starts on the bike, on the weight bench in the middle of last year.”

That’s experience talking, and Westwood said he has learned to embrace being an elder statesman not just of the European Tour but of golf in general.

“It is nice to beat kids that weren’t born when you won your first tournament, I must admit,” he said with a smile.

Helen has been on his bag since the end of 2018 after Westwood ended his long-time association with caddie Billy Foster and she’ll be there next year again, getting the first call for the big events if the family situation allows.

They also plan to get married some time in 2021.

Westwood couldn’t do without her at the moment, even if she doesn’t get involved in the decisions he makes on the course.

“Helen working with me is like having a psychologist there,” he said. “It’s just a game, it’s as ridiculous as getting a little white ball into a hole that’s way too small.

“If you’ve got that kind of perspective, that it’s just a game, especially with what’s gone on this year and people’s freedom being taken away, it gives you the perspective and that’s taken pressure off me as well.”

Westwood praised the European Tour for putting on a full schedule this year in difficult times during the pandemic but he played his part, too, hosting the British Masters in July — a tournament that marked the full resumption of the tour’s 2020 season.

“His performances and his professionalism are matched by his longevity and his commitment to European golf,” the tour’s CEO, Keith Pelley, said about Westwood. “For Lee to call shortly before our resumption and ask what he could do to help the tour is testament to the person and the player he is.

“To then go on to become the European Tour’s No. 1 player for a third time, 20 years after he first achieved that accolade, was a storybook way to end this most challenging of years.”