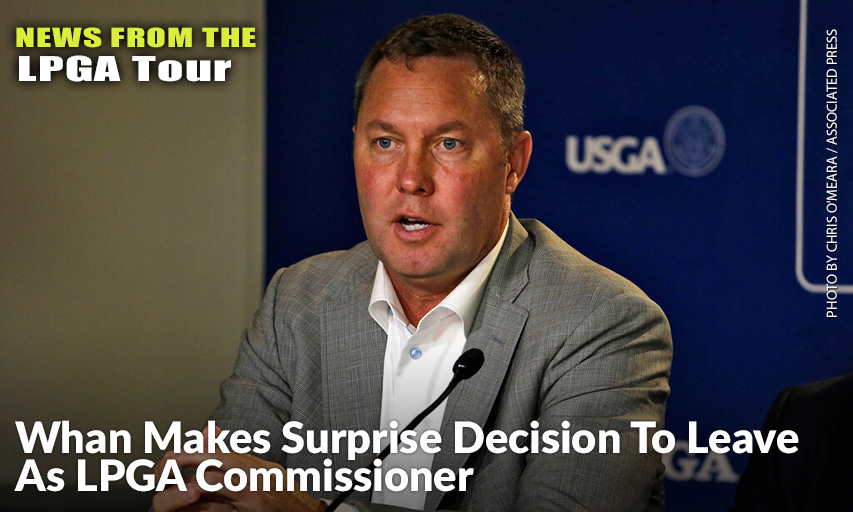 Mike Whan has been commissioner longer than anyone in the 70-year history of the LPGA Tour. Guiding it through its toughest year amid the COVID-19 pandemic made him realize the tour was strong enough for him to move on.

In a surprise announcement Wednesday, the high-energy, fast-talking Whan said he will be leaving after 11 years.

Whan said he had been thinking about stepping down for the last few years and always found unfinished work, even as the self-sustaining LPGA Tour kept increasing its schedule and prize money and expanding the participation of junior girls.

The pandemic cost the tour five months and 16 tournaments, along with taking a chunk out of the budget surplus it had built up over 10 years. Without guaranteed network TV money, the LPGA leaned on the relationship with sponsors to get through 2020 and still deliver a 34-event schedule for 2021 with record prize money approaching $80 million.

“Watching us work through the pandemic of 2020 was the visualization I needed to know that it was not only time, but it was right,” Whan said in a conference call. “I think (if) five years ago the pandemic hits, Mike Whan probably does much of the taking over. In 2020, I got to ‘watch’ more than ‘do’ more. And there’s an incredible pride that comes with that.”

Diane Gulyas, chair of the LPGA board of directors, said a search committee has been formed, with hopes of having a new commissioner as early as the second quarter. She said it would be “terrific” to have a woman leading the LPGA, but “we’re not going to rule anybody out.”

“Mike Whan has been positive proof that you pick the best person, and you’ll have amazing results,” she said.

Whan added: “The LPGA is going to be run by women. It is today and will be in the future. So if the next commissioner person doesn’t get that, they’ll be miserable.”

Whan has no immediate plans when he leaves the LPGA this year. He turns 56 next month and said only that he looked forward to jumping off another cliff with a suspect parachute and “figuring it out on the way down.”

That’s what he faced when he took over in 2010 with the LPGA struggling to emerge from the economic downturn and the ouster of Carolyn Bivens. The tour had only 24 official events, its smallest schedule in 40 years. Relationships with longtime sponsors needed repaired.

More than the numbers, Whan said he was proud of restoring the culture of a women’s league that always had to do more with less and was willing to put in the time.

His message to the players was to “act like a founder,” the 13 women who created the LPGA in 1950 and were responsible for running tournaments and drumming up support when they weren’t playing. The most recent campaign was “Drive On,” inspiration stories of women succeeding in their sport.

“I didn’t change the culture. I think I just kind of brought us back to what was important,” Whan said. “I think we believe in ourselves as the underdog, and I hope we never lose that. Because we believe we’re the underdog, we are willing to push a little harder, try a little longer and not hear all the people telling us why that’s not possible.”

The LPGA Tour starts its new season in two weeks at the Diamond Resorts Tournament of Champions, one of several new tournaments created in recent years as Whan provided a balance of domestic events without ignoring the global nature of his tour.

Along the way, the LPGA Tour formed alliances with traditional men’s organizations. The R&A now operates the Women’s British Open, which was held at Royal Troon last year and goes to Carnoustie in 2021. The PGA of America joined the LPGA in running the Women’s PGA that has gone to courses that have hosted men’s majors.

“I feel fairly confident in 30 years people are going to look around and go, ‘Man, there’s a lot more women playing golf than there was 30 years ago.’ I’m not sure that they’ll tie that back to me or my team, and I’m not really sure that’s important. But that’s going to happen.”

Hall of Famer Juli Inkster was on the search committee when the LPGA selected Whan as its eighth commissioner.

“I liked his spunk and his fire, and he seemed like he had what we needed. And it turned out to be true,” Inkster said. “He’s as honest as the day is long. He’s going to tell you if he can do it or not. He’s a hard worker and a people person. We’re going to miss him. He’s going to be tough to replace.”