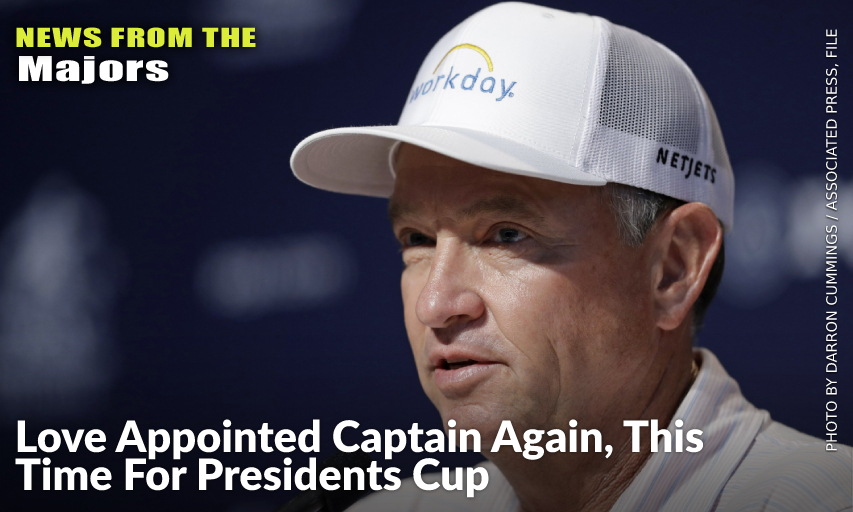 Davis Love III is going back to where he was born for a job he knows as well as anyone.

The PGA TOUR has selected Love to be U.S. captain for the Presidents Cup in 2022 at Quail Hollow Club in Charlotte, North Carolina. Trevor Immelman of South Africa previously was selected to be the International team captain.

It will be the third time Love has been captain of a U.S. team in the last 10 years. He was captain when Europe rallied from a 10-6 deficit to beat the Americans in the 2012 Ryder Cup at Medinah, and he was Ryder Cup captain for a rare U.S. victory four years later at Hazeltine.

He also was an assistant captain in the Ryder Cup under Corey Pavin in 2010 and Jim Furyk in 2018 and is on the staff of Steve Stricker this year. In the Presidents Cup, he has been an assistant under Fred Couples in 2013, Jay Haas in 2015 and Stricker in 2017. He does not lack for experience.

“My history with this event dating back to 1994 conjures up indelible memories of competition, camaraderie and sportsmanship, and I’m thrilled to be leading the top American players into Quail Hollow Club next September,” Love said.

The Presidents Cup was supposed to be played this year until the COVID-19 pandemic led to the Ryder Cup being postponed one year to this September. The Americans have won the Presidents Cup the last eight times, most recently in 2019 at Royal Melbourne with Tiger Woods as a playing captain. He chose not to captain again.

Television viewers for the Waste Management Phoenix Open can have a second-screen experience geared toward betting.

The “NBC Sports Edge BetCast” will debut on Peacock Premium alongside the telecast of the tournament on Golf Channel and NBC, which has the tournament this year because CBS is broadcasting the Super Bowl.

PointsBet is the official sports betting partner of NBC Sports, and an official betting operator of the PGA TOUR.

With the 16th hole on the TPC Scottsdale as a backdrop, the show will feature live odds and betting props as it follows a feature group, with a PointsBet oddsmaker at the trading desk. All betting information will be provided exclusively by PointsBet.

“As we continue to embrace sports betting, the tour will continue to innovate and find new ways to engage fans around the world,” said Norb Gambuzza, the tour’s senior vice president of media and gaming.

Phil Mickelson has high hopes for the new year, even though he turned 50 last June and finished outside the top 50 on the PGA TOUR money list for the first time in his long career. He even spoke of making a push to play in the Ryder Cup for the 13th consecutive time.

“But if I don’t play well early on, I’ll start to reevaluate things and maybe play a few more events on the Champions Tour,” he said on the eve of The American Express. “Because what's fun for me is competing, getting in contention and trying to win tournaments.”

Mickelson won both times he played last year on the PGA TOUR Champions.

He didn’t have much of a chance at The American Express. Mickelson made 18 pars [in the second round] — the first time in his career he had done that — and missed the cut by six shots.

Next up is the Farmers Insurance Open at Torrey Pines in his hometown of San Diego, a tournament he has played every year but one. Mickelson is not a fan of what Rees Jones did to the South Course to prepare it for the 2008 U.S. Open. He has completed 72 holes only three of his last eight appearances.

The missed cut did not damper his outlook.

“There’s a lot of good things to take from it, the way I’m driving the ball, my iron play,” he said. “There’s a lot of positives. But if you look at the scorecard, it’s pathetic. I’m not denying that. But I think that it’s a little bit closer than it looks.”

Still to be determined is whether Mickelson returns in June for the U.S. Open. He said last year, before the COVID-19 pandemic forced the USGA to do away with qualifying, that he would not accept a special invitation if he did not qualify. He currently is not exempt.

Tommy Fleetwood is still trying to figure out the best way to prepare for the majors, and he’s going to try something new this year.

Fleetwood was runner-up in the 2018 U.S. Open at Shinnecock Hills after closing with a 63, and he was runner-up to Shane Lowry at Royal Portrush (by six shots) in the 2019 British Open. He also played in the final group with Brooks Koepka in 2017 at Erin Hills and finished fourth, five shots behind Koepka.

“I’m trying to have a week off before every major and then play the week before that,” Fleetwood said in Abu Dhabi. “I feel like that’s a good run into the events for me. So I think just working backwards on the schedule that way is something I’ve done a little bit different.”

He was runner-up at The Renaissance Club last year. Then again, he skipped the Scottish Open in 2019 before his runner-up finish at Portrush.

“Especially around the summer, you have so many great events,” he said. “But around every major you have great events, and you always have to make the choice of playing and missing some and doing what you think is whatever the way you want to work it.”

Jessica Korda's victory in the LPGA Tour opener moved her to No. 17 in the world, the fifth American among the top 20. ... Si Woo Kim has three victories, two of them on Pete Dye courses (TPC Sawgrass and PGA West). ... Tony Finau has 35 finishes in the top 10 since the start of the 2016-17 season on the PGA TOUR without winning. The next best is 16 top 10s by Tommy Fleetwood, Byeong Hun An and Kevin Streelman. ... Kim was the third player this season to close with 64 to win on the PGA TOUR. The others were Jason Kokrak at the CJ Cup at Shadow Creek and Brian Gay at the Bermuda Championship.

Rory McIlroy has started a new year with a top 5 finish in 12 of his 14 seasons without ever winning.

“Because they give away a lot of money for 20th.” — Kevin Kisner, on why he plays tournaments on courses where he doesn't think he can win.