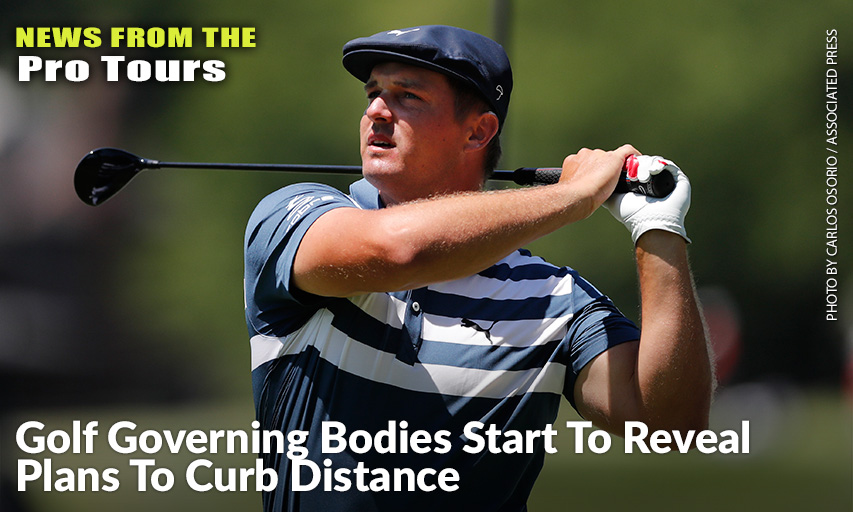 Nearly a year after the “Distance Insights Project” declared that golfers are hitting the ball farther than ever, the game’s two governing bodies announced three proposed changes to equipment and testing standards.

One of the proposed changes includes a local rule that could limit the length of the shaft to no more than 46 inches, down from 48 inches. DeChambeau has been testing a 48-inch driver, though he has yet to use it in competition.

The USGA and R&A also proposed slight changes to how golf balls are tested for the overall distance standard and how drivers are tested to measure how much of a trampoline effect they have on impact.

The comment period for the shaft limit ends on March 4, while the deadline for comments on proposed test changes for golf balls and drivers is Aug. 2. In other words, any changes are still a long way off.

The original plan was to publish a specific set of research topics related to distance last spring, but the USGA and R&A put that on hold due to the COVID-19 pandemic.

In the update, they mentioned six “areas of interest” to explore, the first step in deciding whether to propose new rules. That included a local rule that would be available if tournaments wanted clubs or golf balls that resulted in shorter distances.

Research is likely to take the remainder of the year. Mike Davis suggested as much when he announced last year he was stepping down as CEO of the USGA.

Paul Casey made a point two years ago of saying he would not be playing in the new Saudi International, citing his work with UNICEF and telling The Independent that he “would be a hypocrite” if he were paid to play there.

At the Saudi International, he said that after thinking about it the last two years, he learned UNICEF was not a political organization.

“Their focus is purely on the vulnerability of children around the world, and making sure they look after children around the world and doing everything they can to save them. And that’s important to me and that’s my focus with my charitable views and endeavors,” Casey said. “And so I was reminded that if you stay away, if you don’t engage, if you don’t talk, you don’t visit, then you’re merely kind of hardening positions, and so that actually doesn’t do any good.”

Casey added: “I will hold my hand up and say that the position I had two years ago was probably not the right position to have. And so that is why I am here.”

The Saudi International features Dustin Johnson among four of the top 10 in the world, making it the strongest regular European Tour field at least until the summer. Casey is coming off a victory in Dubai as he makes a push to earn valuable Ryder Cup points.

US OPEN IS OPEN AGAIN

The USGA is proceeding with the hallmark of its biggest championship by announcing sites for the first stage of qualifying for the U.S. Open.

Qualifying at the local and sectional levels had to be eliminated last year because of the pandemic and complications involving so many local golf associations putting on 18- and 36-hole qualifiers from which roughly half of the U.S. Open field is determined.

The first stage of U.S. Open qualifying (18 holes) goes from April 26 through May 18 on 109 golf courses in 43 states and Canada. The next stage is 36-hole sectional qualifying. Those courses have not been announced. The U.S. Open is June 17-20 at Torrey Pines in San Diego.

Still to be determine is whether the USGA will stage international qualifying for the Women’s Open. Since 2014, such qualifiers have been held in England and Asia.

Dustin Johnson was the overwhelming winner as Player of the Year by the Golf Writers Association of America. For Bernhard Langer, it was old hat.

Johnson received just under 94% of the vote in winning the award for the second time. Along with his five-shot victory and record score at the Masters, the world’s No. 1 player won the FedEx Cup for the first time. He also recorded an 11-shot victory in The Northern Trust and won the Travelers Championship.

Langer won for the Senior Player of the Year for the sixth time after a season that had no end. Langer had one victory and was leading the Charles Schwab Cup when the year ended. The Schwab Cup will not be decided until after this year because of tournaments lost to the pandemic. Langer narrowly won the vote over Ernie Els, who won two events.

Sei Young Kim was the Female Player of the Year after two victories, including her first major, the KPMG Women’s PGA Championship.

The annual GWAA Awards Dinner, typically held the Wednesday night of Masters week, has been canceled because of the pandemic. The players will receive their awards later this year.

Jack Nicklaus is building his first golf course in the Middle East. Nicklaus is designing a private championship golf course for Qiddiya, which is 28 miles (45 kilometers) away from the Saudi Arabia capital of Riyadh. ... The fifth major on the LPGA Tour has a new name, now The Amundi Evian Championship. French-based Amundi has signed on as title sponsor for the next five years. The deal means prize money increases by $400,000 to $4.5 million. It will be held July 22-25 at Evian Resort. ... Padraig Harrington made the cut for the seventh consecutive time, his longest such streak since the summer of 2016. ... Cathy Harbin, a PGA master professional who owns Pine Ridge Course in Paris, Texas, has joined the PGA of America board as an at-large director. She follows Renee Powell, who fulfilled her term. ... The French Open is back on the European Tour schedule, moving to May for the first time in nearly 20 years. It was canceled last year because of the pandemic. The tournament at Le Golf National will be May 6-9, with a prize fund of $1.5 million euros (about $1.2 million U.S.).

Collin Morikawa is the only player from the top 10 in the world who is not playing this week. Five are at the Waste Management Phoenix Open and four are at the Saudi International.

“That's why I love the game. It throws punches at you, you throw punches at it and at the end of the day, hopefully you're the one standing.” — Patrick Reed.