Homa Gets Another Chance And Wins Hometown Event At Riviera 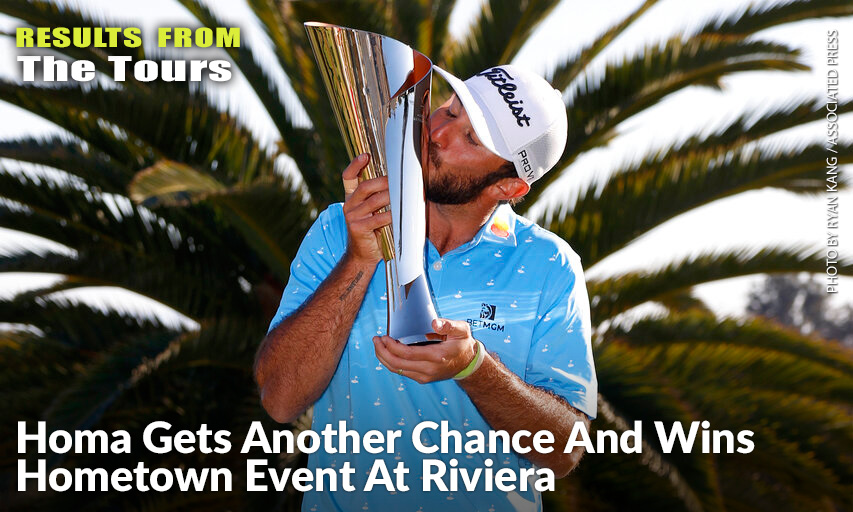 LOS ANGELES, California — The dream of winning at Riviera felt too good to be true for Max Homa, and it nearly was.

Needing a birdie on the 18th hole to win the Genesis Invitational, he hit sand wedge to a back pin that settled 3 feet away, setting up the storybook finish for a guy who grew up 30 miles away and has been watching this tournament his whole life.

And then he missed.

His ball next to the base of a tree left of the 10th green on the first playoff hole, Homa hooded a gap wedge with enough top spin to scoot up the Kikuyu grass and onto the edge of the green, setting up par. Tony Finau missed a 7-footer, and Homa was happy just to get to the next hole.

Homa won on the second extra hole when Finau failed to save par from a bunker, missing a 10-foot putt.

The message from tournament host Tiger Woods at he trophy presentation: Way to hang in there.

“I don't know if I could ever do anything cooler in golf than this,” said Homa, who closed with a 5-under 66 and played his final 26 holes at Riviera without a bogey. "Tiger Woods is handing us a trophy — that's a pretty crazy thought. We grew up idolizing him, idolizing Riviera Country Club, idolizing the golf tournament. To get it done, it's almost shocking.

“It feels like it just can't be topped for me.”

It was more heartache for Finau, who now has 10 runner-up finishes worldwide since winning the Puerto Rico Open five years ago. He closed with a 7-under 64, the best score of the final round. He had a 7-foot birdie putt on the first extra hole for the win and left it on the low side. He watched someone celebrate again. And he kept his chin up.

“It's bittersweet to be in this position again,” Finau said. “But I never get tired of playing good golf, and that's what I tell myself every week.”

Homa, who joined Finau at 12-under 272, won for the second time on the PGA TOUR. He cracked the top 50 in the world for the first time at No. 38. The victory sends him back to the Masters, along with the next three World Golf Championships.

All that felt secondary. He was at Riviera, just like he was as a kid eating soft pretzels and watching the best. Only this time, he was holding the trophy.

“I think young me would have had a hard time dreaming this one,” Homa said.

He had a hard time with his emotions, holding back tears right after he won until he paused and said, “Wow. I didn't think it would be like this.”

“The city of champions — Dodgers, Lakers, me now," Homa said. "It's a weird feeling.”

For so long, the tournament belonged to Sam Burns. He was on the verge of becoming the first player to go wire-to-wire at Riviera since Hal Sutton won the 1983 PGA Championship. But it fell apart with three bogeys in a four-hole stretch on the back nine, and he closed with a 69 to finish one shot out of the playoff.

That set up the Hollywood finish for Homa, right up until it felt like a horror movie when he missed the short birdie putt.

“You're not supposed to miss a 3-footer in front of Tiger Woods,” he said. “I just was a little nervous, honestly. This tournament means a lot to me.”

A call from his wife settled him down. She leaves him random messages — some he said some don't make a lot of sense, but he likes them, anyway — and this one hit the spot. One of the bullet points was to forgive quickly any mistakes. There weren't many, except the one at the end.

“I called her after I signed my card and I said, ‘I think I choked a little bit.’ And I laughed,” Homa said. “She said, ‘No, you played great, don’t worry about it and don't forget to forgive quickly.'”

After a nervous moment on the 10th, redemption arrived.

Dustin Johnson, the No. 1 player in golf, started the final round two shots behind and in the final group. He missed an easy birdie chance on the opening hole and it never got much better. Johnson failed to make a run and fell back with careless bogeys along the back nine. He shot 72 and tied for eighth.

Burns steadied himself with two big par putts from the 10-foot range — on No. 14 to avoid a third straight bogey and on the 18th hole for a 74 that gave him a two-shot lead.

The third round was completed Sunday morning because of a four-hour delay from wind so strong on a course so firm that the average score was 73.34, the highest ever for a weekend round at Riviera since the PGA TOUR began keeping such statistics in 1983.

Jordan Spieth never got anything going, either. Coming off a pair of top-five finishes to turn his fortunes around, Spieth was five shots behind going into the final round and could only manage a 71 to tie for 15th. But at No. 61 in the world, he is ineligible for a World Golf Championship for the first time since he became a PGA TOUR member.