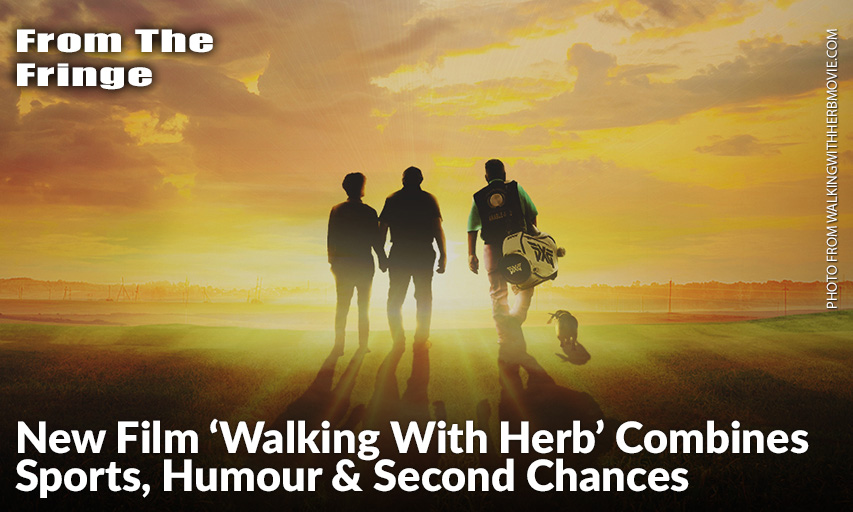 LOS ANGELES, CA – Feb 10, 2021 – The uplifting, new film WALKING WITH HERB takes audiences on an 18-hole rollercoaster ride as one man discovers how the impossible can become possible through faith, family and second chances . . . and with the help of God’s motorcycle-riding messenger!

“It was one of the best experiences I’ve ever had working on a film,” said Olmos, who plays the lead character, and is an executive producer. “An amazing script and an excellent cast combine for a heart-warming, funny story about golf, belief and second chances.”

Joe Amable-Amo is a bank executive and former amateur golfer struggling with his faith after an unexpected tragedy. Faced with doubts about himself, his purpose and his belief in God, Joe is stunned when God tells him that he’s been chosen to inspire the world and play in a world championship golf tournament. Guided by God’s eccentric personal messenger, Herb, Joe learns that the seemingly impossible is possible…through faith, family and second chances.

WALKING WITH HERB premieres April 30, May 1, and May 3 for a three-night nationwide Fathom Events limited engagement. Find tickets at FathomEvents.com or WalkingWithHerbMovie.com.

“WALKING WITH HERB is the right movie at the right time,” said Fathom Events CEO Ray Nutt. “As we emerge from a challenging year, we could all use a film that uplifts, entertains and reminds us of what is possible.”

Produced by Optimism Entertainment and Rio Road Entertainment, WALKING WITH HERB is directed by Ross Kagan Marks and written by Tony® winner and Academy Award® nominee Mark Medoff. It is distributed by Fathom Events.

WALKING WITH HERB is based on the book of the same name by Las Cruces, New Mexico, banker and golfer Joe S. Bullock. It was filmed in Las Cruces.

About Fathom Events
Fathom is a recognized leader in the entertainment industry as one of the top distributors of content to movie theaters in North America. Owned by AMC Entertainment Inc. (NYSE: AMC); Cinemark Holdings, Inc. (NYSE: CNK); and Regal Cinemas, a subsidiary of the Cineworld Group (LSE: CINE.L)., Fathom operates the largest cinema distribution network, delivering a wide variety of programming and experiences to cinema audiences in all of the top U.S. markets and to more than 45 countries. For more information, visit www.FathomEvents.com.