Update To Fans Of The AIG Women’s Open 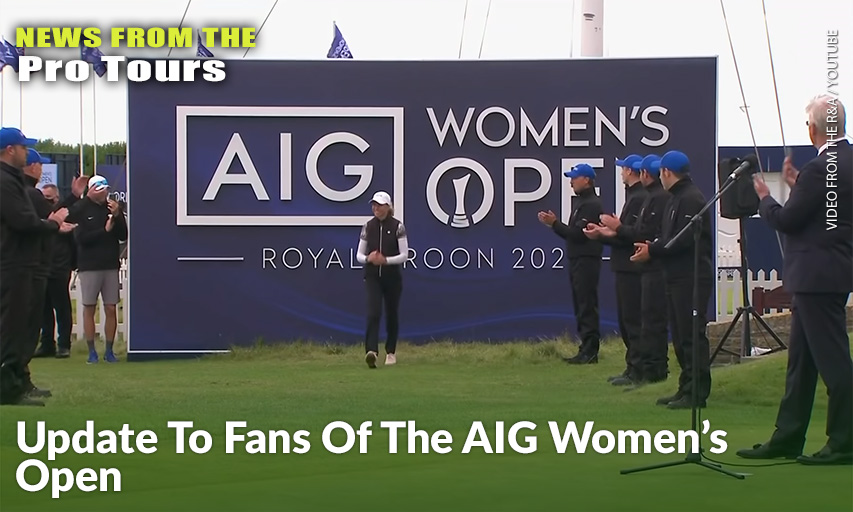 The R&A Chief Executive Martin Slumbers has issued a message to fans to update them on plans for the AIG Women’s Open.

The open letter reads as follows:

Like many of you, we have been closely following the progress of the Scottish government’s roadmap and welcome the growing sense of optimism that measures can be eased in the weeks ahead. We share that positive sentiment and I would like to briefly update you on our plans for this year’s AIG Women’s Open, which will be played at Carnoustie from 19-22 August.

The AIG Women’s Open was the only major sporting event to be played in Scotland last summer. This was incredibly important to the women athletes who competed and whose playing opportunities had been disproportionately affected by the pandemic. It was a fantastic championship with Sophia Popov’s fairy- tale win proving perseverance, belief and hard work are the markers of success.

However, one thing was missing – you, the fans.

Fans bring a whole other dimension to the AIG Women’s Open, from the cheers erupting across the course, to the nail-biting tension at the 72nd hole and the laughter, joy and camaraderie of celebrating the world’s best women golfers. You are what elevates a championship from memorable to truly special.

We are greatly encouraged that we will be able to welcome fans at the AIG Women’s Open and I would like to assure you that we are working with the Scottish and UK governments, our health and safety advisers, agencies and our partners at AIG to progress our plans to ensure that everyone can enjoy the action at Carnoustie safely.

Nothing is certain with the COVID-19 pandemic but as the vaccine roll out continues at pace and the governments provide a clear framework for moving back toward normality, we believe that the AIG Women's Open will provide fans with something wonderful to anticipate this summer.

Let’s look forward to the final putt being rolled in on the 72nd hole to a huge roar from fans at the 2021 AIG Women’s Open at Carnoustie.

Until then, thank you and stay safe.