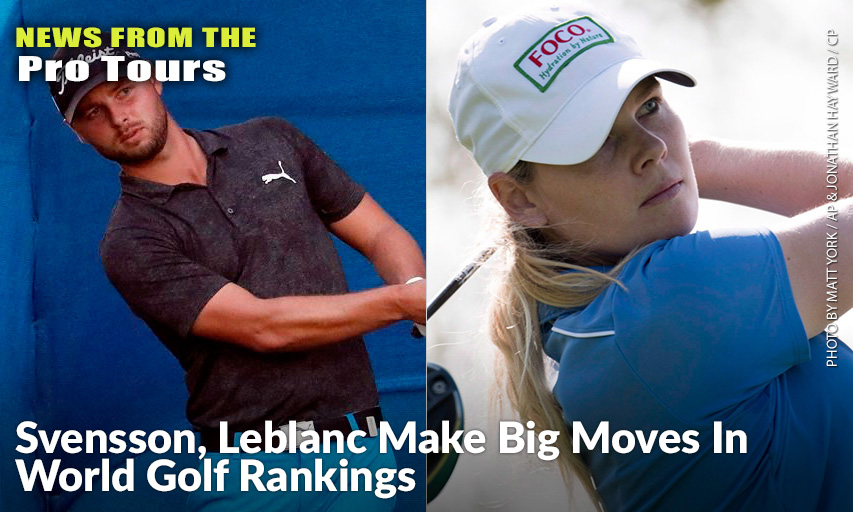 A Canadian man moved nearly 200 spots up the world golf rankings, while a Canadian woman took a step toward earning an LPGA Tour card on a big weekend for the sport in the country.

Adam Svensson of Surrey, B.C., is up to 282nd in the rankings after starting last week at No. 474. Svensson won the Korn Ferry Tour’s Club Car Championship at The Landings Club in Savannah, Ga.

Meanwhile, Maude-Aimée Leblanc of Sherbrooke, Que., is now fifth in the Symetra Tour season standings after tying for second at the IOA Championship in Beaumont, Calif. The top 10 at the end of the season earn LPGA Tour cards.

Leblanc is now 422nd in the world women’s rankings, up 121 spots from last week.

Svensson and Leblanc weren’t the only Canadians to make big gains.

Michael Gligic of Burlington, Ont., is now 393rd in the world rankings (up 125 spots) after posting a career-best tie for fourth at the PGA TOUR’s Corales Puntacana Resort & Club Championship in the Dominican Republic.

Drew Nesbitt of Oro-Medonte, Ont., also surged to 673rd from 1,018th after a second-place showing at the PGA TOUR Latinoamerica’s Mexico Open.

And Canada now has two players in the top 50 of the men’s rankings after Mackenzie Hughes of Dundas, Ont., jumped to 50th from 53rd following his run to the round of 16 at the Dell Technologies Match Play in Austin, Texas. Corey Conners of Listowel, Ont., leads the way in 41st.

Brooke Henderson of Smiths Falls, Ont., is seventh in the women’s rankings after tying for 10th at the Kia Classic in Carlsbad, Calif.

Svensson’s win puts him in prime position to regain a PGA TOUR card he lost after the 2019 season. He is 12th in the Korn Ferry standings with the top 25 at the end of the regular season moving up to the top tour.

“I would say it’s my biggest tournament win ever," Svensson said after his second career Korn Ferry victory. "I put so much hard work in in the off-season. I’ve never been that hard of a worker. I built a team in the off-season and worked my (butt) off. Hardest I’ve ever worked in my life. It’s just very fulfilling when you work that hard and it pays off."

Svensson captured the title with a birdie on the second playoff hole to beat out American Max McGreevy.

“I almost teared up a little bit just because of everything I’ve been doing," he said. "It’s a lot of emotion. Your heart is pumping. You just want it to be done. You just want to win and have it be over with. It was just like a relief it’s over.”

Svensson said the turning point came before this season.

"I made a commitment to myself about five months ago. I built a team. I have a serious team with me," he said. "I work day in and day out. I said, ‘I’m either going at this 100 per cent, or I’m quitting.’ I was tired of playing well, not playing well, lost my PGA TOUR card and it’s because I’m not working hard enough. Now I’m fully committed, and we’ll see where it takes me.”

Svensson returns to action at the Emerald Coast Classic at Sandestin in Destin, Fla.

The first major of the LPGA season also starts with the ANA Inspiration in Rancho Mirage, Calif. Henderson and Alena Sharp of Hamilton are in the field.