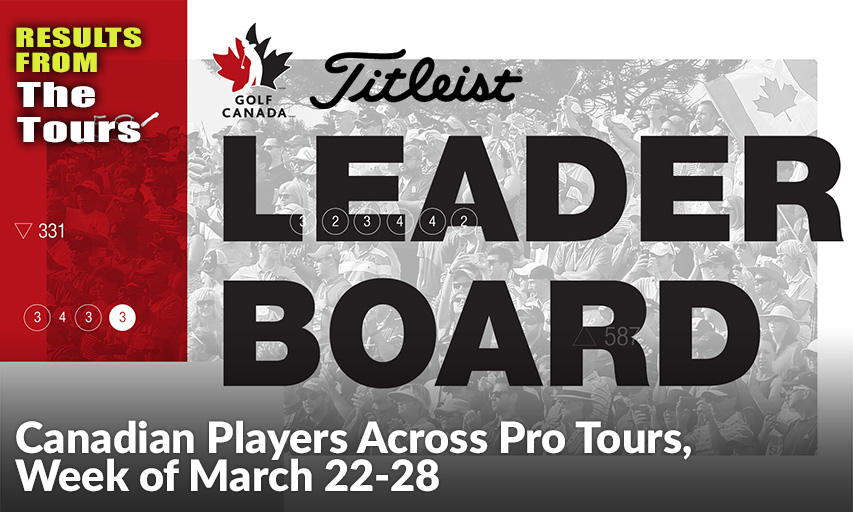 Adam Svensson sank an 8-foot birdie putt on the second playoff hole to erase a four stroke deficit and win the Club Car Championship over Max MCGreevy. It was his second career victory on the Korn Ferry Tour, his first one coming back in 2018. That was also the last time Svensson made the leap up to the PGA Tour and his win Sunday puts him on track to do the same thing in 2021. The victory also moved him inside the top 300 in the Golf World Rankings for the first time in his career …Ben Silverman recorded his third top 20 result of the season – his best stretch on the Korn Ferry Tour since 2017, when he finished with eight…Stuart Macdonald was just one shot off the clubhouse lead after the opening round and one stroke back heading into the final round on Sunday.

Billy Horschel outlasted Scottie Scheffler in the final of the WGC-Dell Technologies Match Play, winning 2 and 1. Horschel, who had never qualified for the weekend in four previous appearances at this event, won six out of the seven matches for his sixth PGA Tour title. Scheffler beat three former Match Play champions and two players from the top 10 in the world to reach the championship match. Matt Kuchar won the consolation match over Victor Perez, who missed out on Special Temporary Membership on the PGA Tour with the loss. …Mackenzie Hughes, who was seeded 48th, won Group 9 with a 2-0-1 record defeating Webb Simpson and Paul Casey in the group stage. He was eliminated in the round of 16, losing to Spain’s Sergio Garcia 2 and 1.  …Corey Conners finished 0-3 in group stage play and did not advance to the playoff round

Joel Dahmen carded a final round 70 but needed Rafael Campos to miss his 15-foot birdie attempt on the final hole before winning the Corales Puntacana Resort & Club Championship. Even with his first PGA Tour title, Dahmen did not qualify for the Masters next month because the tournament was played opposite the WGC Match Play event. …Michael Gligic posted his first top 10 and career-best result on the PGA Tour with a tie for fourth. After a birdie to close out his opening round, Gligic went 37 straight holes without a bogey before making a 5 on his opening hole of the final round. …David Hearn’s final round 66 tied for low round of the day and enabled him to climb 33 places for his second best finish of the season. …Roger Sloan notched his third consecutive top 25 result. …Taylor Pendrith posted his second best career result in his sixth career PGA Tour start

Inbee Park went wire-to-wire to win the Kia Classic by five-strokes, becoming the first international player to win on tour this year. It was her 21st LPGA Tour title, moving her into 25th place on the all-time victory list and within four of matching Se Ri Pak for the South Korean total. Lexi Thompson and Amy Olson finished in a tie for second. …Brooke Henderson recorded her 56th career top 10 result but her first since January. …Alena Sharp snapped her streak of missed cuts at two

Germany’s Sophie Hausmann carded a final round 70 to win the IOA Championship  for her first Symetra Tour title.  Sophia Schubert and Maude-Aimee Leblanc finished tied for second, three strokes back. She was the leader after a first round 67. Leblanc currently sits fifth in the tour money standings. …Brittany Marchand recorded her first top 20 result since March 2020.

Daniel van Tonder needed a birdie on the third playoff hole to defeat Jazz Janewattananond and notch his first European Tour title at the Kenya Savannah Classic. It was van Tonder’s fifth win in his last 13 worldwide starts. England’s Sam Horsfield and Scotland’s Calum Hill both finished in a tie for third. …Aaron Cockerill posted his first top 30 result since last December. His third round 64 equalled his lowest career round on the European Tour.

Jeffrey Kang sank a 30-foot eagle putt on the final hole to cap a roller-coaster round and win the Mackenzie Tour-PGA TOUR Canada qualifying tournament. Following a triple-bogey 7 on the seventh hole, Kang saw his three shot lead evaporate and another bogey on the front nine left him at 4-over as he made the turn. But a birdie on No. 10 kick started his comeback that included two eagles over the final four holes to win the tournament and secure a full exemption for the 2021 season. Joseph Harrison, David Longmire, Jeffrey Swegle, Shintaro Ban and George Markham all secured exemptions through the first half of the schedule. …Shane Crampton finished as the top Canadian in a tie for 27th and missed earning conditional status by one stroke

Alvaro Ortiz Becerra shot a final round 63 to post a come-from-behind win at the Mexican Open by three strokes. Defending champion Drew Nesbitt finished runner-up for his second-best result on the Latinoamerica Tour and his fourth top 10 in 18 career starts. …Hugo Bernard matched Nesbitt’s opening round 65 which left both of them two shots off the lead