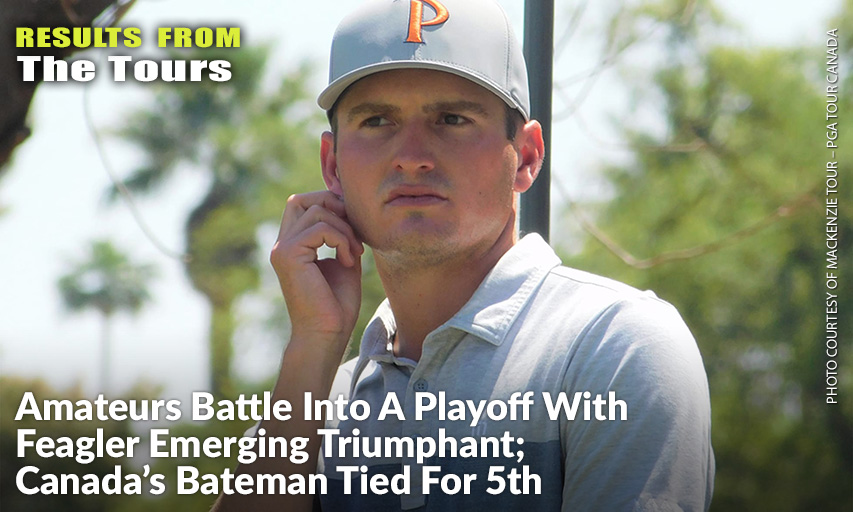 LITCHFIELD PARK, Arizona — In a professional event that will determine players’ futures, it was a pair of amateurs who ended up battling well into the afternoon at The Wigwam’s Gold Course, host of the Mackenzie Tour – PGA TOUR Canada Qualifying Tournament. Pepperdine’s Clay Feagler and Arizona State’s Blake Wagoner finished at 12-under after 72 holes, with the duo going to a sudden-death playoff. There, Feagler prevailed, earning medalist honours and full Mackenzie Tour status for the entire 2021 season. Wagoner, along with the other top-five finishers behind Feagler, will be fully exempt through essentially the season’s first half.

Besides the amateurs, others to earn status were Samuel Saunders and Tee-K Kelly (11-under), Daniel Hudson and Canada’s Wil Bateman (10-under). Just missing finishing among that group was third-round co-leader Jon Trasamar, who shot a final-round, 4-over 76 and dropped into seventh place. He will be conditionally exempt this season.

In the overtime session, at the Gold Course’s par-5 first hole, Feagler hit his approach shot onto the green in two, while Wagoner knocked his ball into the greenside bunker. Feagler faced a 25-foot eagle putt, while Wagoner had a 13-footer for birdie after blasting out of the sand. Feagler lagged to about 18 inches, and when Wagoner couldn’t sink his putt, Feagler routinely tapped in for the title.

“It's crazy. It is a final round. I was nervous. I’m not going to lie,” said the Pepperdine senior. “Before the round I wasn’t feeling great. I came out here and had a good range session. I thought, If I can keep hitting the ball like that, I felt like I had a good chance. I just needed to get the putter going. These last rounds at Q-School can get very nerve-wracking.”

That played out on the 18th hole of regulation, Wagoner one group ahead of Feagler. After hitting his second-shot approach into a canal bordering the 18th green, Wagoner took a penalty drop and putted to about 18 inches from 50 feet. From there, facing a bogey putt, he missed, settling for double bogey, to fall to 12-under and, eventually, into the playoff.

“I didn’t know that at the time,” Wagoner said of his short miss that ultimately would have won him the tournament had he made it. “I didn’t think I would be in contention to win. I just decelerated and had one of those brain farts coming down the stretch.” He still managed a smile knowing he will be in action once the Mackenzie Tour season begins later this year.

Feagler turned the 18th hole in regulation into the turning point of the tournament. After a solid drive that landed in the middle of the fairway, he hit a 9-iron approach to about 18 feet, left of the pin.

“Basically, I was just telling myself, ‘Don’t hit it in the canal. Hit it somewhere on grass and give yourself a chance for birdie,” Feagler said of his approach. “I saw a little right to left. The grain was going that way. I told myself to just get it there. I had left everything short today. I don’t know if I was nervous. I just couldn’t get the ball to the hole, and I was making sure I didn’t three-putt. I’m really comfortable with right to left. I saw a good line, I hit it and it went in the hole.

“It’s good knowing I have job security this summer,” Feagler continued. “I thought I was going to get some status. I didn’t know it was going to be full. I just knew I had to make a good putt on it. If it goes in, great. Crazy how things unfold.”

The Mackenzie Tour’s sixth Qualifying Tournament will be at Callway Gardens in Pine Mountain, Georgia, beginning this Tuesday, April 6.

Did you know medalist Clay Feagler has never played in an official PGA TOUR-affiliated Tour event? This qualifying tournament is his first appearance of any kind.

How the Tournament Worked
One-hundred-two players entered this tournament and 97 played all 72 holes. Below is a breakdown of the various Mackenzie Tour membership statuses available this week.

• Clay Feagler feasted on the par-5 opening hole. He made three “official” birdies there plus an eagle in the third round. His fourth birdie came in the playoff, the victory-sealing putt. He was a cumulative 10-under on the Gold Course’s par-5s this week.

• Sweden’s Elis Svärd, an amateur who plays college golf at Cal State-Monterey shot back-to-back 71s to finish the tournament but was the hard-luck player to finish a stroke out of a tie for 24th that would have given him conditional Mackenzie Tour status.

• Blake Wagoner picked up early momentum on his opening hole, making a six-foot eagle putt after hitting his 8-iron approach shot close. Three holes later, at the par-5 fourth hole, he chipped in and was 4-under through four holes.

• The round of the day belonged to Samuel Saunders. He fired a 6-under 66 to go from a tie for 14th when the day began into a tie for third, locking up playing status for the first half of the season.

• Blake Wagoner’s next college tournament will be the ASU Thunderbird Invitational hosted by Arizona State on April 16-17, while medalist Clay Feagler and his Pepperdine Waves will play at Pasatiempo Golf Course in Santa Cruz, California, for the Western Intercollegiate on April 12-14.

• Former Kansas golfer Daniel Hudson earned status with his tie for fifth, and his rounds of 71-69-67-71 made him one of four players to post four under-par rounds this week. The others were Blake Wagoner (second place), Kevin Velo (eighth) and Michael Feuerstein (tied for ninth).

• Despite making birdie on his opening hole, third-round co-leader Jon Trasamar had a three-hole stretch beginning at No. 2 where he made three bogeys. He would only make one more birdie the entire round to go with 11 pars, a bogey and a double bogey. He shot a 76 and fell into seventh place.

• Dylan Healey also had a disappointing finish after taking a share of the 54-hole lead. Tied with Jon Trasamar when the day began, Healey shot a 2-over 37 on the front nine then was unable to make a birdie on the back, recording three bogeys and a double bogey—at the par-4 13th. Healey tied for ninth and will have conditional status this season.

• Amateur Sam Harned helped himself considerably Friday, shooting a 5-under 67 to move into a tie for 19th and earn conditional status. That 67 came with a bogey-par-bogey finish. In his first 15 holes, he made an eagle and five birdies to get to 7-under. When the final round began, Harned was tied for 40th.

• The toughest hole Friday was the par-4 18th. Only nine players made birdie there, with the field stroke average checking in at 4.309. The first hole was the easiest in the final round. The par-5’s average was 4.381. There were 51 official birdies but actually 52 counting Clay Feagler’s birdie in the playoff.

“I thought the first and second rounds were really tough. The pins were in some dicey places, and the greens were really firm. Today I thought it was the easiest.” –Clay Feagler

“Today I was telling myself to not make mistakes and just keep fighting.” –Clay Feagler

“I didn’t want to look at my phone. I’m not a big leaderboard watcher. There’s an innate feeling inside you where you know where you’re at. I felt like I needed to par-birdie (finish) to get some job security.” –Clay Feagler on the uncertainty coming down the stretch

“It’s definitely hard to know. You have this uncertainty where you’re at during the round.” –Clay Feagler on not knowing exactly where he stood on the leaderboard coming down the stretch

“I think anytime you have four rounds, it’s pretty grueling. I’ve played golf tournament-wise the last three weeks and haven’t had a day off basically trying to get prepared for this event.” –Clay Feagler

“I was playing in this (tournament) last year when COVID hit. That was a bummer, and I wasn’t playing great anyway.” –Blake Wagoner

“To be able to come out to Wigwam this year—I got drawn for Dothan (Alabama) last year—and to stay in my hometown and to play well was pretty fun.” –Blake Wagoner on his home-game tournament this week