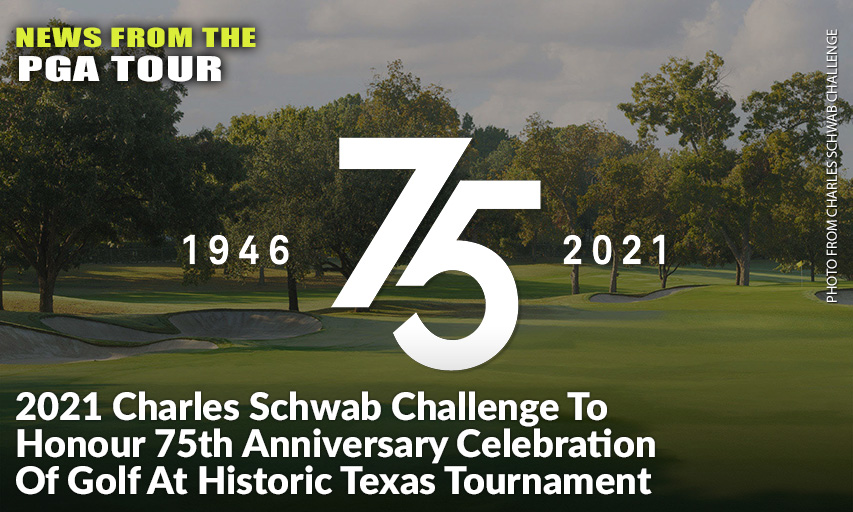 FORT WORTH, Texas — With one month remaining until the world’s best golfers tee off at Colonial Country Club for the 2021 Charles Schwab Challenge, Schwab today announces this year’s programming elements – from the return of a special Champion’s prize, to popular fan engagement programs – that will lead the celebration of the tournament’s 75th anniversary, set for May 27-30 in Fort Worth, TX. While the worldwide pandemic postponed last year’s tournament until June, it returns to its traditional timing over Memorial Day Weekend and will see fans at the course in limited numbers.

“This tournament has such a significant place in golf – and Texas – history and Charles Schwab is honored to help continue its tradition during this historic 75th anniversary year,” said Jonathan Craig, senior executive vice president, Investor Services & Marketing at Charles Schwab. “From being associated with some of the greatest names to ever play the game, to its position last year as the first sporting event to return amidst the pandemic, the tournament has long held a deeper meaning given its history – and we are excited to once again demonstrate our commitment to Colonial, its fans, and the Dallas-Fort Worth community through our programming this year.”

A Prized New Ride for the Champion

The winner of the Charles Schwab Challenge this year will again drive off with a new champion’s prize to complement the Colonial’s iconic Leonard Trophy and Scottish royal tartan plaid jacket. In the firm’s first year as title sponsor in 2019, a fully renovated and customized 1973 Dodge® Challenger – that paid homage to the year Schwab was founded – was awarded to tournament champion Kevin Na who, in turn, gave it to his caddie Kenny Harms. More details on what will make the 2021 prize unique will be revealed in the coming weeks.

Schwab’s digital content series, “The Challengers,” also returns and continues to highlight several icons in the sport of golf that are challenging the status quo in their own fields. Two of this year’s five episodes directly honor the tournament’s 75th anniversary – one celebrating golf legend Ben Hogan, the tournament’s first champion in 1946; and one featuring The Justs, a Louisville family who make the finest, handcrafted hickory and persimmon golf clubs in the world – just like Hogan made famous. In addition to other stories that present individuals who, like Charles Schwab, challenge the status quo in their respective fields, the series also introduces Troy Mullins, a World Long Drive competitor and focuses on the modern approach she takes with her golf game.

Onsite at Colonial, the state-of-the-art fan engagement zone, “The 5: Schwab Performance Center,” will return and showcase the five modern fundamentals of both golf and investing, linking tournament legend Ben Hogan’s ground-breaking approach to the game and Schwab’s modern approach to investing and retirement. It also will thread together the 75-year history of the tournament with a new, Hogan-themed activation designed to help visitors improve all aspects of their game. Fans with tickets to the Charles Schwab Challenge can visit the Schwab Performance Center from May 27-30. Social distancing, and health and safety measures will be in effect; face coverings will be required.

Given the tournament’s return to the Memorial Day weekend after a three-week postponement in 2020, this year’s event will also pay tribute to the members of the U.S. military who gave their lives in service to their country. During play on Sunday, May 30, a moment of silence will be observed on the course, accompanied by a flyover of military aircraft to further mark the solemn occasion – a one-of-a-kind milestone in professional golf.

The Charles Schwab Challenge, the longest running professional golf tournament on the PGA TOUR at the same venue, has been a mainstay in the North Texas community since 1946. Over the decades, the tournament has seen champions representing the biggest names in golf including, Arnold Palmer, Jack Nicklaus, Lee Trevino, Tom Watson, and of course, Ben Hogan.

Charles Schwab & Co. signed on as title sponsor of the PGA TOUR’s Fort Worth Invitational at Colonial Country Club in 2018. Already a major sponsor of the PGA TOUR and PGA TOUR Champions, the firm’s four-year agreement marked its first-ever title sponsorship of a PGA TOUR event. Schwab continues to grow rapidly in the Metroplex where its new 70-acre, LEED-certified campus in Westlake was recently was designated as home to the firm’s corporate headquarters.

For more information on the tournament, its 75th anniversary and this year’s initiatives, visit www.schwabgolf.com and www.charlesschwabchallenge.com. It will be broadcast nationally to a televised audience on the Golf Channel and on CBS Sports.

About the Charles Schwab Challenge
As the Official Investment Firm of the PGA TOUR® and PGA TOUR Champions since 1997, Charles Schwab expanded its golf presence by assuming title sponsorship of the PGA TOUR’s annual tournament at Colonial Country Club beginning in 2019. The four-year agreement will run through 2022. The Charles Schwab Challenge is one of the country’s premier and longest-running PGA TOUR events, serving as a showcase for the game’s best players. The Wall of Champions at Colonial Country Club is populated by many of the game’s greatest names, with Fort Worth native and Colonial member Ben Hogan chief among them as the tournament’s only five-time champion, starting with the first two editions of the tournament in 1946-47.

About Charles Schwab & Co.
At Charles Schwab we believe in the power of investing to help individuals create a better tomorrow. We have a history of challenging the status quo in our industry, innovating in ways that benefit investors and the advisors and employers who serve them, and championing our clients’ goals with passion and integrity.