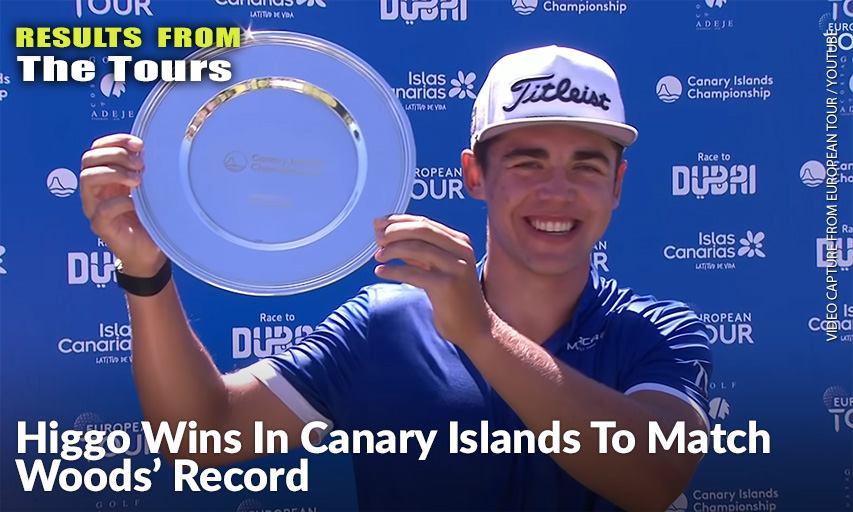 The 21-year-old South African had a hole-in-one on his way to a 7-under 64 that secured him his third European Tour title — and second in three weeks.

“It’s unreal, I played so well today,” Higgo said. “I hit the ball very nicely so it was a lot less stressful than the last time because I was hitting it a lot better. I can’t believe it happened so quickly again but my game has been good so I can believe it as well.”

He aced the par-3 seventh hole and and made seven birdies to finish at 27 under for the tournament in Tenerife, matching Woods for the fewest number of events needed to claim three European Tour or PGA Tour wins since 1990.

Playing in his 26th event, Higgo also is the fastest South African to three wins, not including majors.

“I’ve been working really hard, a lot of little things, and I’ve also accepted what works for me and stuck with that,” Higgo said. “I think that’s been a big thing, and not if I don’t play as well look for something. I’m just going to try and keep going. I think I can go as high as I want to, the way I’m playing I can do a lot of good things.”

Two weeks ago he won the Gran Canaria Open with a European Tour record low score of 255. His other European Tour win came last season at the Portugal Open. He finished in a tie for eighth last week at the Tenerife Open.

Higgo won by six shots over second-place Maverick Antcliff of Australia. Tapio Pulkkanen of Finland finished another shot back in third place.