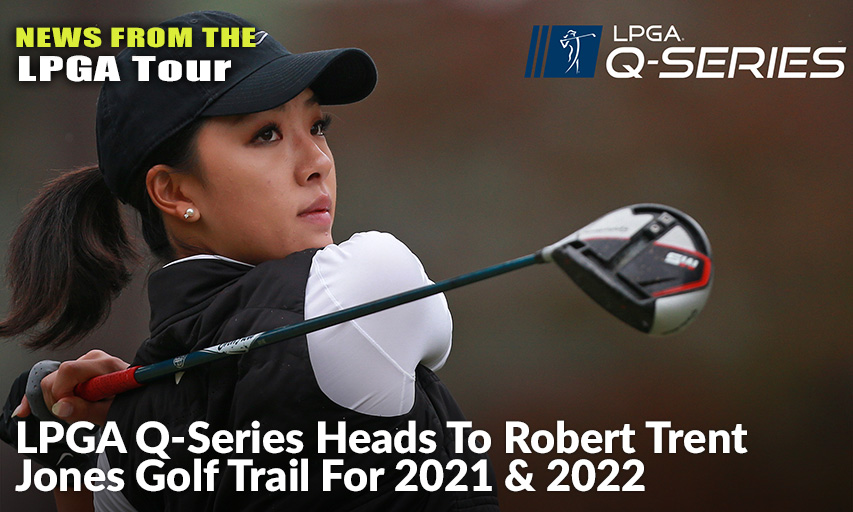 The LPGA Tour today announced that the 2021 and 2022 LPGA Q-Series will take place at the Robert Trent Jones Golf Trail (RTJ Golf Trail) in Alabama. In 2021, the first week of competition will be held at Magnolia Grove (Crossings and Falls Courses) in Mobile from Dec. 2-5, while the second week will be staged at Highland Oaks (Highland and Marshwood Courses) in Dothan from Dec. 9-12.

Q-Series is the third and final stage of the LPGA Qualifying Tournament, to determine playing status for the 2022 LPGA Tour season. The 144 holes (eight rounds) of final qualifying are played over two 72-hole, stroke-play events held on consecutive weeks, with players competing for a $150,000 purse and status on the LPGA Tour. All three stages of qualifying were cancelled in 2020 due to the COVID-19 pandemic.

“We couldn’t be more thrilled for the Robert Trent Jones Golf Trail to host Q-Series for the next two years. The competition throughout the two weeks is elite and intense and it’s fitting to have a host who has hosted and supported women’s golf time and time again,” said Heather Daly-Donofrio, Chief Tour Operations Officer. “Our current and future Members have put in work their whole lives to live out their dreams of competing on the LPGA Tour and we are excited to see what the field this year has to show.”

The RTJ Golf Trail is the largest golf course construction project in history. It consists of 100 miles of courses, with each course ranging from 4,500 to 8,191 yards. The first course was opened in 1992, and today the trail is made up of 11 locations across the state of Alabama.

“We are excited to strengthen our partnership with the LPGA Tour as the host site for the LPGA’s Q-Series,” said Mike Beverly, President of Sunbelt Golf, which manages the RTJ Golf Trail. “We look forward to providing the opportunity to further the careers of these aspiring women golfers.”

Over the years, the RTJ Golf Trail has hosted the LPGA Tour, PGA Tour and PGA Tour Champions. From 1998 to 2007, the LPGA Tournament of Champions was held on Magnolia Grove (1999-2007) and Grand National (1998), with winners including Karrie Webb, Se Ri Pak, Lorena Ochoa and Paula Creamer. The Yokohama Tire LPGA Classic was held at Capitol Hill’s Senator Course from 2007 to 2016, with Lexi Thompson and Ariya Jutanugarn earning their first LPGA Tour victories in 2011 and 2016, respectively. In addition, Magnolia Grove hosted the Airbus LPGA Classic from 2008 to 2014, while the PGA Tour’s 2015 Barbasol Championship was held at Grand National.

The LPGA Q-Series field, which will have a cut after 72 holes, will include players who finish 101 to 150 and ties on the current-year LPGA Race to CME Globe Points List as well as players 11 to 35 and ties from the Symetra Tour official money list. A maximum of 10 spots will go to players in the top 75 of the Rolex Women’s World Golf Rankings while the top five and ties on the LET Order or Merit will also be exempt into Q-Series. The field will be rounded out by a minimum of the top 30 and ties from Stage II of Qualifying School. The final number of players who will advance from Stage II to Q-Series will be determined prior to the start of Stage II.