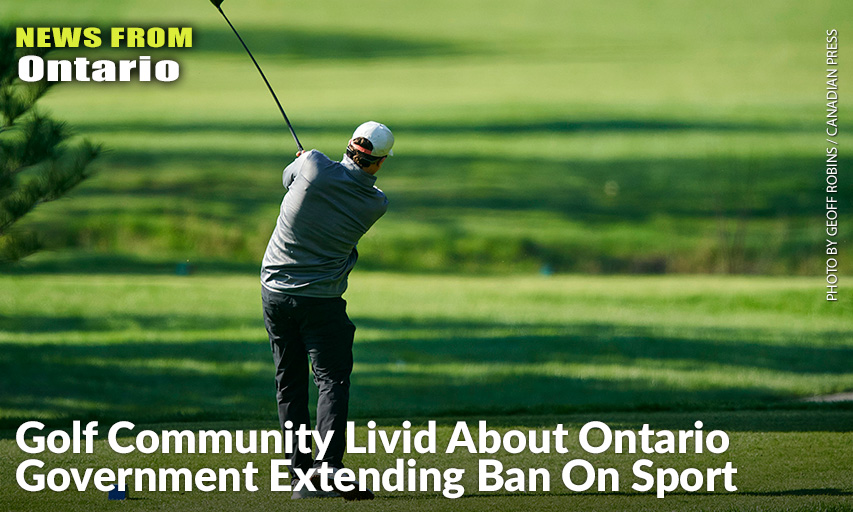 Barber, the executive professional/GM at The Landings Golf Course and Teaching Centre in Kingston, Ont., can’t understand why Ford has extended the ban on golf in Ontario until at least June 2. It was part of the government’s decision to prolong its stay-at-home order — which also prohibits many other outdoor activities — by two weeks due to the COVID-19 pandemic.

Golf isn’t banned in any other jurisdiction in North America.

“There’s nothing that makes sense about all of this, whether it be golf, tennis courts or basketball courts,” Barber said. “Keeping people inside is the total opposite of what we should be doing.

“And to suggest that golf, somehow, after an entire season last year of running operations with zero cases reported in terms of transmission on a golf course, to now where we’re seen as being a big problem is ridiculous. There’s no basis for that stance, other than what I would imagine is some sort of animosity towards the golf business.”

Ford further drew the ire of golfers by saying the extension came after he spoke with his friends.

“They pick up another buddy, two or three go out, go golfing, there’s nothing wrong with golfing,” he said. “The problem is, then after golf they go back, they have some pops. That’s the problem.”

“We’re constantly told by the political class to follow the science,” Barber said. “Yet the premier comes along with a policy that has absolutely nothing to do with science.

“It’s an anecdotal story he tells about how his buddies go and play golf and have a beer afterwards. If that’s what is driving his policy, then it’s a joke . . . it absolutely makes no scientific sense. Zero.”

“(Ford) is an embarrassment to Ontario and its golf community,” tweeted Leggatt, the GM at Toronto’s St George’s Golf and Country Club, which was supposed to host the PGA Tour’s RBC Canadian Open the past two years before it was cancelled.

“Maybe stay away from ’the pops’ before going to the mic next time!”

Like many golfers from Ontario, Herb Page also has June 2 circled on his calendar, but for a different reason.

A native of Markham, Ont., and a member of the Canadian Golf Hall of Fame, Page is now is the owner/director of golf at Windmill Lakes Golf Course in Ravenna, Ohio.

June 2 is when Ohio will end all COVID-19 health orders, showing just how different things are in the U.S. and Canada.

“I don’t know if it’s the right thing, I hope we don’t experience a rebound,” the longtime Kent State University golf coach said. “I may still keep the plexiglass we have up, I’m going to talk to my employees and meet with our people and see what l’ll do.

“I have so much empathy for the people in Ontario who own and run these golf courses. I can’t imagine the economic hardship right now for all the golf professionals, all of the golf courses, all of the jobs. I’ll tell you, I can’t think of a safer, better place to be than on a golf course.”

The pandemic has prevented Page from travelling to Ontario. He last saw his family in December 2019.

“I haven’t seen my sister, brother, nieces and nephews since then,” said Page, who was inducted into the Canadian Golf Hall of Fame that same year. “It’s sad, I really miss them a lot.”

Many perceive golf to be an elitist sport, but Barber said nothing could be further from the truth.

“Are there private clubs where it costs a heck of a lot of money to join? Yes, absolutely,” Barber said. “But they’re the minority.

“I welcome people to come spend 10 minutes at The Landings golf course in Kingston to understand golf is actually played by the public, that the vast majority of people who play aren’t one-percenters but people getting out on to the golf course with their kids. Seniors just out for some exercise, guys after a long day on the construction site just coming to have a good time. That’s where the growth has been in golf the last couple of years, that’s the vast majority of it.”

Page, who coached top Canadian touring pros Corey Conners, Mackenzie Hughes and Taylor Pendrith at Kent State, operated his course in 2020 with new rules in place. The facility’s restaurant/snack back didn’t open until May, employees wore masks, there were no rakes in sand traps, ballwashers were unavailable and pins remained in place at all times.

Page said not only did golfers honour the rules, there were no positive tests registered at the course — in a state with the eighth-most COVID cases in the U.S. Page wasn’t forced to lay off any of his workers.

“We had golfers we hadn’t seen in years. The pandemic got many of the people we’d lost back into golf. Now, I’m not trying to be a doctor but it just doesn’t make any sense to close the outdoors where people can social distance and still wear their masks.”

The harsh reality is golf courses require revenue to survive. But Barber understands his industry isn’t the only one struggling.

“Restaurants are struggling and I can’t imagine owning a clothing store,” he said. “I have a pro shop that’s full of merchandise and no customers to sell it to.

“I can’t imagine if that was my only business.”