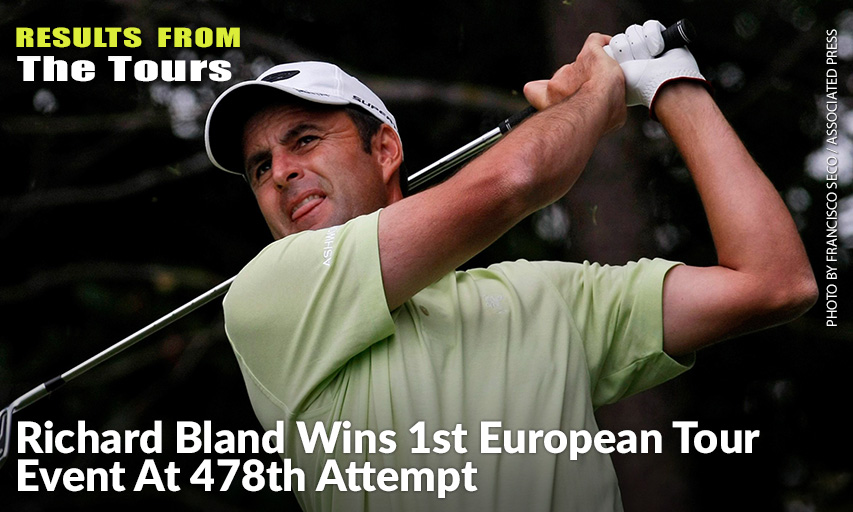 BIRMINGHAM, England (AP) — Richard Bland won his first European Tour event at the 478th attempt after beating Guido Migliozzi in a playoff for a dramatic finish at the British Masters.

Bland became the oldest first-time winner in European Tour history at 48 when he parred the first extra hole at The Belfry after Migliozzi three-putted from long range.

"It's probably going to take a few days to sink in," an emotional Bland said. "It's what I've worked for for 20 years. I've had a few close calls and I assume someone up there was looking down on me quite favorably today.

"A big incentive for me this year was to get to 500 events and this will allow me to do that, which I'll be hugely proud of."

Bland carded a superb final round of 66 to set the clubhouse target on 13 under par, but looked in danger of cruelly being denied victory by the fast-finishing Migliozzi.

Birdies on the 15th and 16th gave Migliozzi a share of the lead and he then found the green in two on the par-five 17th, but missed from five feet for birdie after lipping out from long range for an eagle.

Migliozzi's tee shot on the 18th plugged in the wet grass on the edge of a bunker but, after receiving a free drop, he hit his approach into a greenside bunker and got up and down to force extra holes.

The players returned to the 18th and it was advantage Migliozzi after a superb drive left him 50 yards closer to the green, but after both players hit indifferent approaches it was Migliozzi who charged his birdie attempt five feet past the hole and missed the return.

"I loved it down the stretch out there," Bland said. "I had a one-shot lead with six holes to play and hit the shots when I needed to and that's a huge confidence boost going forwards.

"Who knows? Maybe it's like buses. None come around for ages and then two come along in quick succession."

England's Eddie Pepperell took a one-shot lead into the final round but the 2018 champion could manage only a closing 73 to fall back into a tie for 11th with tournament host Danny Willett.

Scotland's Robert MacIntyre, the highest-ranked player in the field, held a share of the lead after birdies on the second and third, but the world No. 45 eventually signed for a 71 to finish joint eighth with compatriot Calum Hill and Edoardo Molinari.