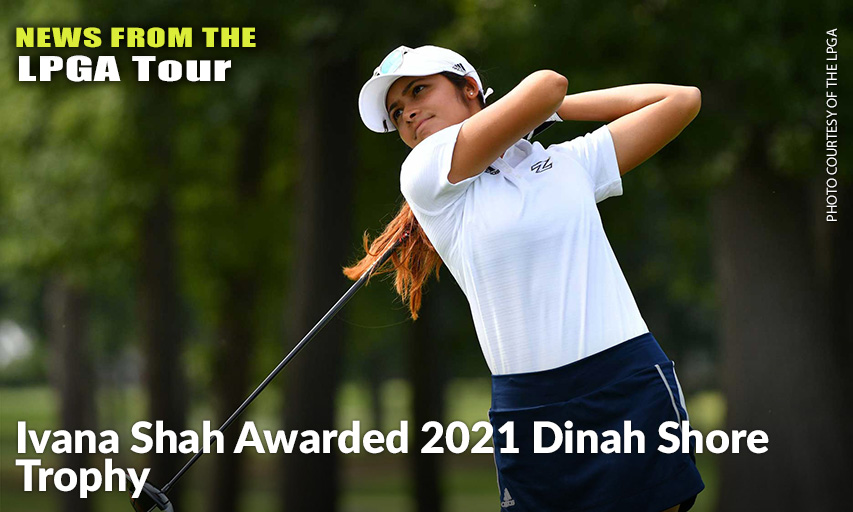 University of Akron sophomore Ivana Shah has been named the 2021 Dinah Shore Trophy award winner, bolstering her status as one of the top collegiate female players who has made an impact on the golf course with her leadership and in the community through charitable endeavors.

Administered by the LPGA Foundation, the Dinah Shore Trophy recognizes women’s golf student-athletes who excel in academics (3.2 on a 4.0 scale) and athletics—playing at least 50% of the team’s scheduled events, while maintaining a scoring average of 78 or less. Nominees must also demonstrate outstanding leadership skills and community service.

“It is such an honor to be the recipient of the 2021 Dinah Shore Trophy award,” said Shah, a two-time Women’s Golf Coaches Association (WGCA) All-American Scholar. “Winning this award proves to me that no matter how bad things may seem in life, we can always do more to serve and support those around us. I am so grateful that I have the opportunity to play the sport I love, while also receiving an amazing education.”

A native of Mumbai, India, Shah is a leader in the classroom and on the golf course. She is the captain of the women’s golf team and a two-year Student-Athlete Advisory Committee member. Shah boasts a 3.902 GPA and is on track to graduate in 2022 with a Bachelor of Science in biomedical engineering.

Inside the ropes, Shah owns a trio of top-10 performances in her Zips career. She tied for ninth at the 2019 Colonel Classic as a freshman and then tied for seventh as a sophomore at the 2019 Fall Preview before an outright fifth-place result at the 2021 MAC Championship as an academic junior. A two-time MAC Golfer of the Week selection, Shah has led the Zips’ lineup in scoring for nine tournaments during her career.

Away from the course and classroom, Shah is the co-founder of Call To Action based in Akron, Ohio. It is a volunteering organization that strives to bridge the gap between eager volunteers and non-profit groups. For volunteers, they organize opportunities to desired non-governmental organizations and for the non-profits, Call to Action serves as a one-stop resource to deliver volunteers as needed. They aim to alleviate any struggles that non-profit groups face when searching for volunteers. You can follow the organization on Instagram @calltoactionakron.

“I co-founded Call To Action with the mission to help the less fortunate in my community, hoping that I could encourage more students to do the same,” Shah said. “I would like to thank my parents, coach, team and all those that support me. I would especially like to thank the LPGA Foundation and Friends of Golf for this award and donation.”

The LPGA Foundation announced the Dinah Shore Scholarship Fund in March 1994 in honor of the late Dinah Shore, a Vanderbilt University graduate and an honorary member of the LPGA and World Golf Halls of Fame. The Dinah Shore Trophy Award has contributed more than $200,000 to women's collegiate golf programs since its inception.