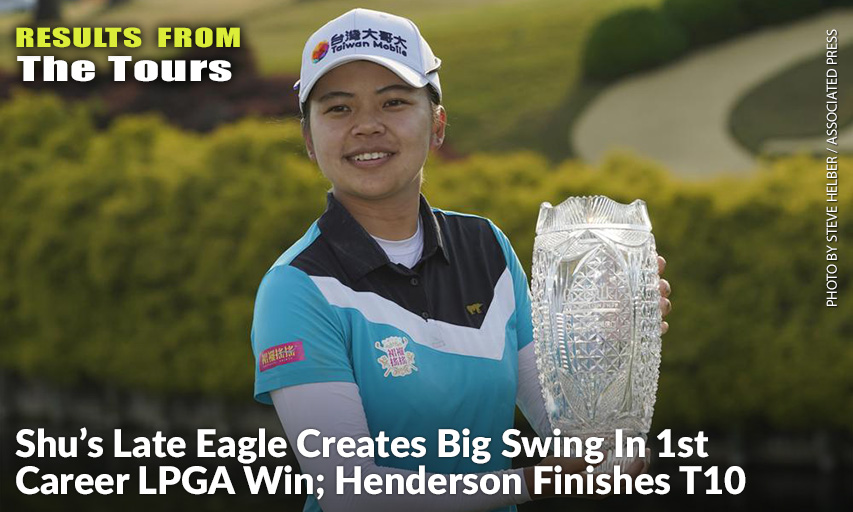 WILLIAMSBURG, Virginia — Wei-Ling Hsu promised her caddie she wouldn’t cry if, or when, she finally won.

Hsu eagled the par-5 15th hole, creating a four-shot swing that gave her a two-shot lead, and won the LPGA Tour’s Pure Silk Championship for her first career victory.

“At 15, ... I thought about myself, that I’ve been waiting for seven years. I don’t want to wait any, more” a tearful Hsu said on the green after securing the victory with a par.

Later, after some time to let it soak in?

“I think this is the happiest day ever. How do you cry?” she said. “And somehow, I just cried so hard the last hole, but I feel happy. Just happy.”

Hsu closed with a 3-under 68 to finish at 13-under 271, two shots clear of playing partner Moriya Jutanugarn. Jutanugarn had a 70. Jessica Korda was third at 10 under after a 70.

Hsu’s eagle, aided by a fortuitous bounce that left her with a very makeable putt, came as Jutanugarn, who started the hole with a two-shot lead, drove into a bunker, needed two shots to get out, hit her approach to the edge of the green and three-putted for a double bogey.

And it all happened on the easiest hole on the course, again showing it can also be the decisive one.

The victory for the 26-year-old from Taiwan, in her 147th career start, was all but assured with another birdie on the par-4 16th that stretched her lead to three. And it came on a sweltering day on the Kingsmill Resort’s James River Course with parched fairways and greens that were fast and firm for all four rounds — unusual for May in Virginia.

For much of the day, the battle for the lead was like a juggling act.

Jessica Korda pulled into a three-way tie for the lead with third-round co-leaders Hsu and Jutanugarn with a birdie at the par-4 sixth while Jutanugarn bogeyed and Hsu made par. Korda went ahead two holes later with a par when her two playing partners bogeyed.

Hsu regained the top spot at No. 12 with a birdie while Korda fell two back, and then Jutanugarn enjoyed the same two-shot swing with a birdie at the par-3 13th while Hsu two-putted for bogey after missing the green.

Jutanugarn’s lead doubled with her third birdie in four holes on the par-4 14th, setting up the remarkable final lead-swap at 15.

“When I made that eagle putt, I just started shaking my hands, like my heart just pumping so hard, it almost come out,” she said.

Jutanugarn did sink a long birdie putt on the par-3 17th, applying some pressure to Hsu, but she rolled in a putt for par, pumping her right fist as it dropped into the cup.

“Of course it’s not finish I wanted to,” Jutanugarn, who was seeking her second career victory said, “but, you know, I still going to take a lot of good things from here.”

“The greens are just baked. The whole place is baked,” she said. “So it was a little tough to be aggressive, especially when you’re chasing and you kind of need to be.”

Kemp, seeking her first victory in her 14th season, was fourth at 9 under after a 70.

“I thought about winning, which I’m okay with. Like I want to get comfortable with that. Sure, I got a little ahead of myself thinking that, but the more I put myself in the situation the better I’m going to be at it,” she said.

The tournament, the penultimate event before the U.S. Women’s Open June 3-6 in San Francisco, was once among the most popular, but failed to attract several of the game’s top players, perhaps because its purse of $1.3 million is third-lowest on the tour.