Ocean Course Put On Spectacular Show. Will It Host Again? 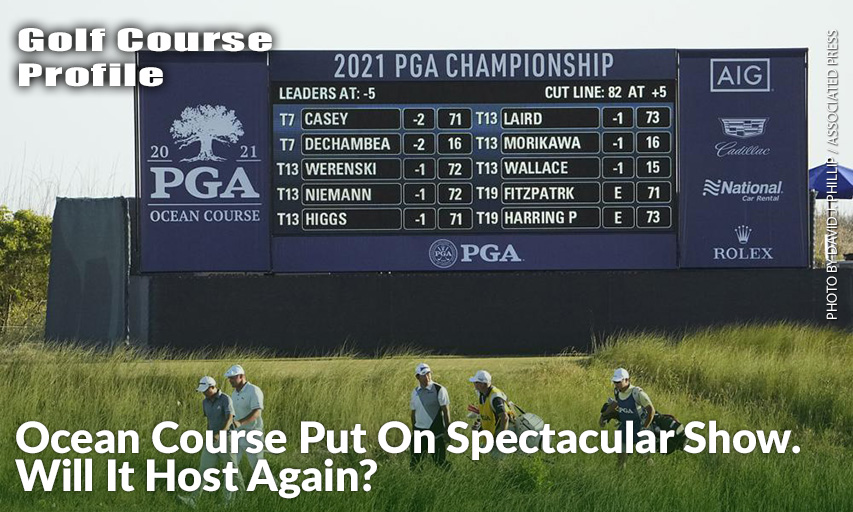 KIAWAH ISLAND, South Carolina — The golf at the Ocean Course was thrilling, the images spectacular, the fans raucous in support of popular champion Phil Mickelson and the players generally admiring of the challenging seaside layout.

Shouldn’t Kiawah Island get that open PGA Championship spot in 2030?

“There’s no timetable on that,” this year’s tournament director, Ryan Ogle said.

Ogle acknowledged the logistical challenges the island had in its last PGA in 2012 with sometimes hours-long traffic jams and a strong summer thunderstorm in the third round making it near impossible to get cars out of the grass parking lots quickly.

Those were non factors this time, picture perfect weather, a revamped parking plan and a limit on fans to 10,000 a day due COVID-19 restrictions.

The results were a magical major.

“We couldn’t have asked for more,” Ogle said.

Collin Morikawa, the 2020 PGA winner, thought the course fair, even with swirling wind off the Atlantic Ocean blowing golf balls this way and that. He’d love to return, whenever that is.

Morikawa followed up his win at TPC Harding Park last August by finishing at 1 under after a final round 68, his best score of the week.

Rickie Fowler was back in major form at the PGA Championship after missing the Masters.

Fowler didn’t qualify for Augusta National this year, ending a run of starting in 41 straight majors. He showed he still knows how to compete in the game’s biggest events, tying for eighth at the Ocean Course.

It was Fowler’s 12th career top-10 finish at a major and first anywhere in 29 events since the American Express event in January 2020.

Fowler didn’t look like he’d do so well at Kiawah Island after shooting a 76 [in the second round]. But he rallied to a 69 in the third round before his bogey-free 70 to close things out. He was five shots behind winner Phil Mickelson.

Both were four shots behind.

Harrington, the European Ryder Cup captain, had a 69 [in the final round] and will be back at Augusta for the first time since missing the cut in 2015.

Higgs, after a closing 70, will play there for the first time and was not shy about wishing back luck on those out on the course who might steal his joy. It’s not something you like doing, Higgs said, “but I’m going to be rooting for people to make bogeys.”

Rory McIlroy said before the tournament began just because he won at the Ocean Course in 2012 didn’t mean he’d pick up where he left off here nine years later.

McIlroy, who won this title on this course by eight strokes in 2012, finished the major with a 72 [in the final round] and was 5-over for the event.

McIlroy had said he didn’t understand all the expectations for his success coming. To him, it wasn’t a very memorable week back then, despite raising the Wanamaker Trophy after the runaway win.

McIlroy’s chances got a boost when he won at Quail Hollow two weeks ago. McIlroy wasn’t so sure.

“I didn’t feel like playing well here nine years ago was going to automatically make me play well again and I felt like my game was ... I felt like coming in here there was still parts of my game that I needed to sharpen up. And obviously, those parts were exposed this week in the wind and on a tough course.”

Ben Cook was the best of the 20 club pros.

The 27-year-old Cook, from Michigan, finished at 4 over after a 74 . He was among just two of the club pro qualifiers to make the cut with Ben Marek ending at 12-over par.

Cook had a 69 [in the third round], his best round of the week that even included a birdie on the challenging par-3, 17th.

“It’s very cool,” Cook said. “It’s always something I’ve strived to do the last couple years and now that I’ve made the cut and was low club pro this year, it’s definitely a goal achieved.”

Marek, who closed with a 76, had tears after the round discussing the support he’s gotten and what it meant to compete this week.

“The support is awesome,” said Marek, a teaching pro in Alameda, California. “I get off the course and my phone has too many messages to count.”