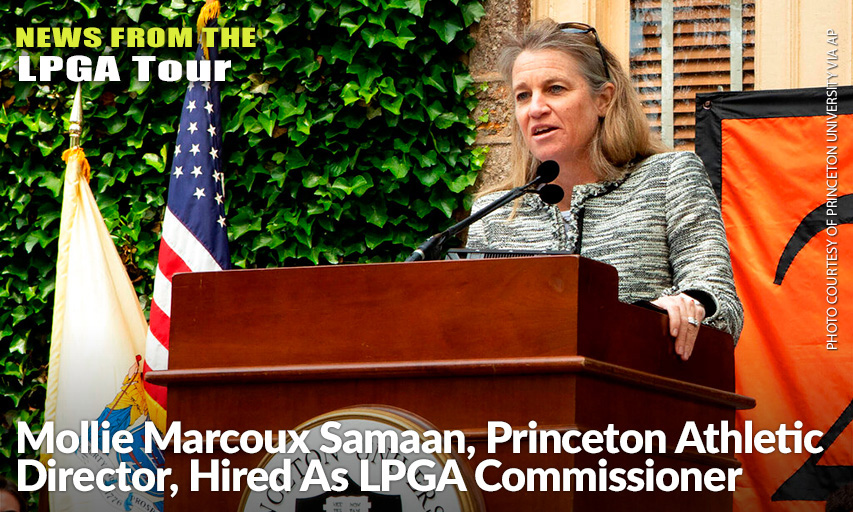 Mollie Marcoux Samaan chose to write her senior thesis at Princeton on a historical construct of women in sports and the role golf played.

Some 30 years later, she had reason to ask her mother to dig out that 100-page thesis for no other reason than to be amazed on how it all has come full circle.

Marcoux Samaan, the athletic director at Princeton the last seven years, was elected as the ninth commissioner of the LPGA Tour, and the second woman to hold the position since the LPGA was founded 71 years ago.

“It certainly wasn’t the most scholarly document that you’ll find,” she said with a laugh. “But it was fun, and it seems so weird to be coming back at this now and so fortunate for me.”

With a passion for women’s sports and a background forging relationships, Marcoux Samaan inherits a tour that made it through the COVID-19 pandemic and emerged stronger than ever with a 34-event schedule, record prize money approaching $80 million and joint ownership of the Ladies European Tour.

She replaces Mike Whan, who got the LPGA back on track during his 10 years and left early this year to become CEO of the U.S. Golf Association.

“I truly believe that this is one of the very best jobs in all of sports,” Marcoux Samaan said on a Zoom call. "I think in this moment in time with just such tremendous positive energy around women’s sports, around women’s leadership, around society’s commitment to diversity, equity and inclusion, I think that we at the LPGA have just this unique platform to change lives for the better.

The LPGA said she would spend the coming months transitioning from Princeton to the LPGA.

The first woman to lead the LPGA was Carolyn Bivens, hired in 2005 with a bullish marketing plan to promote the players. But she alienated sponsors and media at a time when the tour was struggling to get through the recession. She was ousted in 2009 when the LPGA’s schedule had 24 tournaments, 10 of them held outside the U.S.

Marcoux Samaan was a two-sport athlete at Princeton in soccer and hockey — she was first team All-Ivy League in hockey all four years — though her passion for golf runs deep.

She is a five-time club champion at North Fork Country Club in Cutchogue, New York, and she grew up watching Nancy Lopez and other stars compete, dreaming about doing the same.

Golf wasn’t part of her future — except for that thesis — though Golf Digest reported she keeps a 7.4 handicap index at North Fork.

Marcoux Samaan spent 19 years with Chelsea Piers Management, which owns and operates amateur sports complexes in New York and Connecticut. She returned to Princeton in 2014 as its athletic director, and the Tigers won a league-leading 65 Ivy League titles while she was there.

Juli Inkster, the Hall of Famer who was part of the search committee, felt Marcoux Samaan would be a players’ commissioner.

“From her first interview on, you could just see that she is down to earth, just authentic, someone that cared deeply for her athletes at school,” Inkster said. "I think she’s going to listen, and she’s gritty, she’s smart, but she keeps it simple.

“This is probably not the greatest term, but she’s a jock. She loves sports. And I think you have to be that way to really dive in.”

Marcoux Samaan said her priorities would be to learn the landscape before developing a vision based on growth and opportunities, with relationships at the core.

That starts with sponsors paying the bills, one of the strengths of Whan and his team.

“I just think at this moment what could be better than sponsoring the LPGA and sort of how we’re all working towards providing the most diverse and inclusive environments within our companies,” she said. “And to be able to use the LPGA as a platform and commitment to that equity I think is a huge opportunity.”