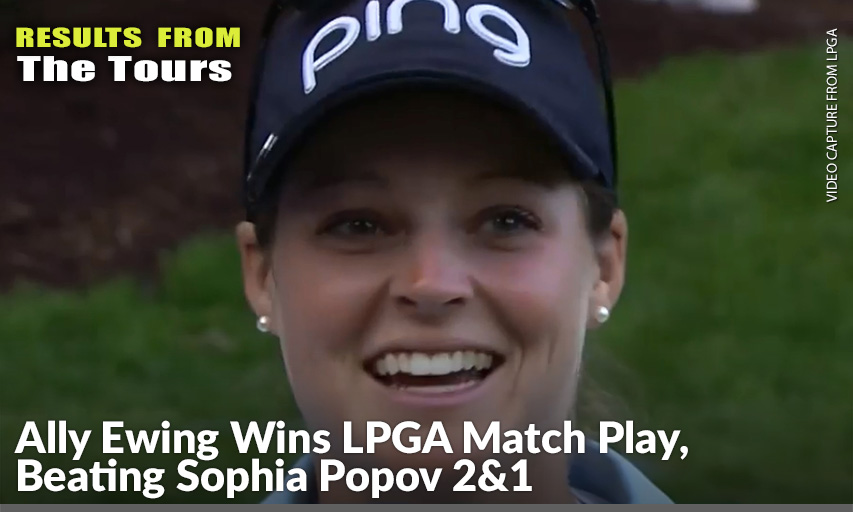 Ewing won the difficult par-4 14th with a birdie to take a 2-up lead and closed out her German rival with a double-bogey halve on the par-3 17th in the final event before the U.S. Women’s Open next week at Olympic in San Francisco.

“I feel like I was limping in really,” Ewing said. “Just kind of really got fatigued out there. Needless to say, Monday through Wednesday leading up to a major championship I’m going to have to find a way to prepare and get some rest.:”

The 28-year-old former Mississippi State player won her first tour title in October in Florida at Reynolds Lake Oconee, playing under her maiden name of McDonald. She won on her first wedding anniversary with Bulldogs women’s golf coach Charlie Ewing.

“Second coolest thing to happen to us on May 30th,” Charlie Ewing said. “I had a lot of trust in her, so I felt like I kept it together a lot better than if I would’ve been playing. A lot of fun watching her. I’m really proud of her.”

Ewing won the par-4 second and fourth holes and held the 2-up lead until Popov took the par-5 11th with a birdie.

“I’m just a little bit sad that I just couldn’t play my best this afternoon, and I know a little bit was fatigue,” Popov said. “I just hit too many bad iron shots on the front nine, and still I was right there. I knew if I had even close to the game that I had the last four days I think I could have won this match, but I think for both of us we could tell that that was not our best performance.”

“My game is in really good shape heading into the U.S. Open — if I can give my feet a little break tomorrow,” Popov said. “I’m just excited. I love major championships.”

In the semifinals, Ewing beat Ariya Jutanugarn 3 and 2, and Popov edged Shanshan Feng 1 up. Feng conceded the third-place match to Jutanugarn because of the heat and fatigue with the U.S. Women’s Open only days away.

“If I play 18 more I don’t know how I will do,” Feng said. “I might fall over on the course. I don’t think I should push myself that bad. If I got in the top two, of course, yes, I would play until I fall down on the course. But I lost the match in the morning, and I think it’s better idea just to get rested after this. Next week is the U.S. Open. It’s a very hilly and challenging course, so, I just want to be well-rested and protect myself.”

The Chinese star played 41 holes [in the third round].

Ewing beat local favorite Danielle Kang 1 up in the quarterfinals after outlasting Jenny Coleman in 19 holes in the morning in the round of 16.

“Definitely a lot of sleep tonight, and, we’ll just regroup,” Ewing said. “Just going to soak in this week and be ready to tee it up.”