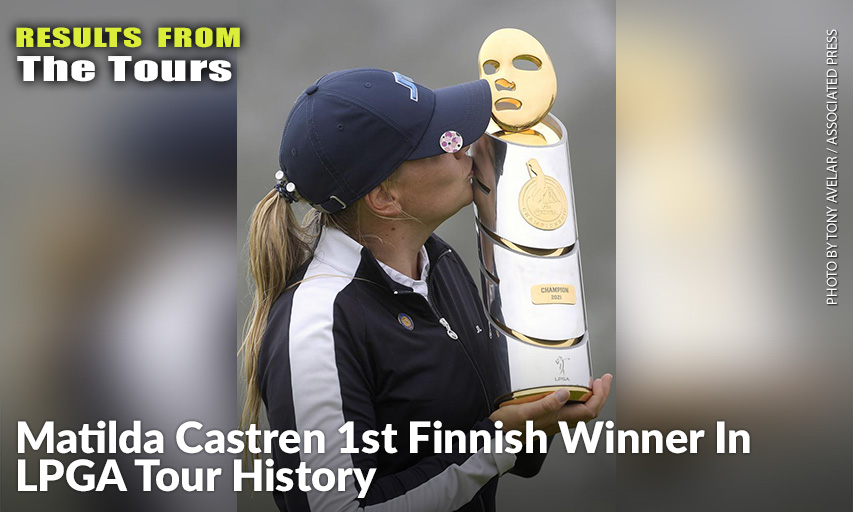 “It’s a huge honor to be a winner as a rookie, and especially first one from Finland,” Castren said. “That’s a really big honor."

Two strokes behind Lee entering the final day of the tour's two-week run on the San Francisco Peninsula, Castren birdied the first three holes, eagled the par-5 fifth and birdied the par-5 ninth for a front-nine 30. She followed with eight straight pars and holed a 3-foot birdie putt on the par-5 18th for a 7-under 65.

“It’s been a dream of mine to win since I was a little girl, and to see it happen and just to win, it’s such an amazing feeling.” Castren said. “There is nothing that compares to it. One of my thoughts was, `Well, I don’t have to go to Q-School this fall.’”

The 26-year-old former Florida State won in her 15th career LPGA Tour start. She finished at 14-under 274 after tying for 30th last week in the U.S. Women’s Open at nearby Olympic Club.

“I was definitely nervous, so my mindset was just going in thinking one shot at a time, one hole at a time, and see what happens, and just trying to enjoy the day because it was my first time in the final group,” Castren said. “I thought it was great for experience no matter what happened. It just turned out I had a great day on the course and got the trophy.”

Lee finished with a 69. She cut Castren's lead to one with a birdie on the par-5 15th, but dropped a stroke with a two-putt bogey on the par-3 17th.

“I think I’m playing good today,” Lee said. “Obviously, she played much better on the front, so I’m not going to punish myself because it was a great week.”

Lee missed a chance to became the first player to follow a Symetra Tour victory with an LPGA Tour win in her next start. The 26-year-old player from Taiwan won the Mission Inn Resort and Club Championship two weeks ago in Florida on the developmental tour.

“Winning a tournament you have to practice, and this is a great practice,” Lee said. “Maybe after couple times I will be there.”

Lexi Thompson shot a 74 to tie for 34th at 1 over. A week ago at Olympic, she blew a five-stroke lead in the final round, playing the last seven holes in 5 over to finish a stroke out of a playoff that Yuka Saso won. Saso and Women’s Open playoff loser Nasa Hataoka skipped the event at Lake Merced.

Michelle Wie West closed with a 71 to tie for40th at even par after missing the weekend cuts in her first four events of the year.