Kikuyu Rough Figures To Be A Brutal Test At Torrey Pines 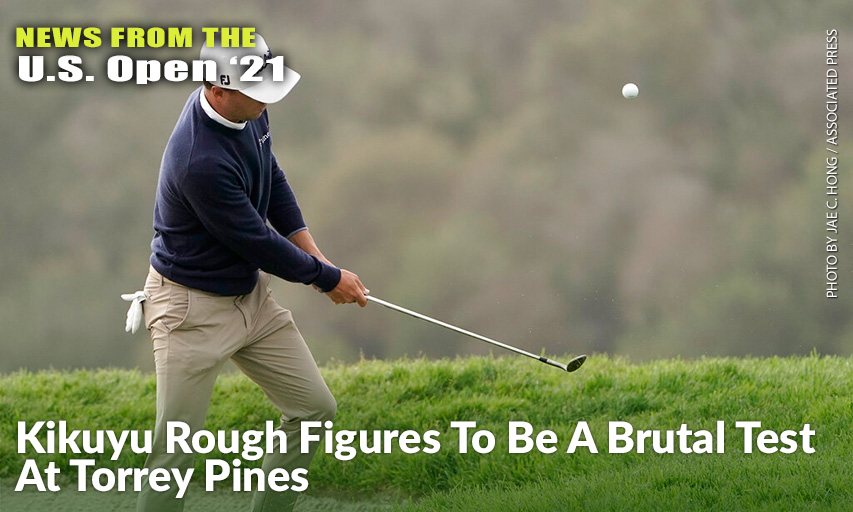 SAN DIEGO, California — Take a bale of spinach, soak it in water, mix in some cabbage bits. Throw in some alfalfa stems and wispy wheat tops. Oh, and a catcher’s mitt.

Now drop a golf ball down to the bottom and try to hit it. Actually, just try to find the ball.

It’s called kikuyu. It could be preceded by a few four-letter words once the U.S. Open gets started Thursday at Torrey Pines.

The U.S. Open is known for having deep rough that swallows golf balls and infuriates the world’s best players.

Kikuyu raises it to a maddening level.

Not from a height perspective. The rough at Torrey Pines tops out at 4 to 5 inches in most places this week, well below the depths of some previous U.S. Opens.

It’s all about the density.

Kikuyu is thick and matted, the broad blades roiling in different directions as they rise, like a swirl of wet wires. The unpredictable nature can mean a ball in a good lie and one that’s almost unfindable in a span of a couple feet.

Kikuyu — pronounced kuh-koo-yoo — is named for the Kikuyu tribe in East Africa, where the grass is native in the highland regions. It’s also found in warmer climates of Asia, Australia, South Africa and South America.

Properly named Pennisetum clandestinum, kikuyu grows quickly and invasively, smothering any other grass in its path. Let it go and kikuyu will run wild, growing through cracks in the pavement, up poles — anywhere here it can grab a bit of sunlight.

Most golf courses try to eradicate it.

Torrey Pines, along with Riviera Country Club and a few other Southern California courses, have embraced the killer kikuyu.

The USGA made it diabolical for the U.S. Open.

“It’s going to make for a great challenge for the players, showcase their skills,” Bodenhamer said.

Kikuyu is great for fairways. The grass is spongy and the ball sits up, almost as if it’s been placed on pool table.

Around the greens, kikuyu can be a nightmare to judge. It’s sticky, so bump-and-runs or long shots that hit fringe tend to take one hop and stop, almost as if the grass is reaching up to grab the ball.

In the rough and around the greens, kikuyu is like green blades of taffy, gripping hosels and turning over club faces.

“The rough is so thick and so penalizing that if you hit into it, it’s one of those you sit and realize, do I chip out, or do I try to get up close to the green?” 2018 Masters champion Patrick Reed said.

The kikuyu is less of a factor during the regular PGA Tour event in January. The course is overseeded with rye grass during the winter, so the rough is far less punitive.

After the 2019 Farmers Insure Open, Torrey Pines superintendent Rich McIntosh opted to cut down all the rye grass so the kikuyu could continue to grow, a process he duplicated this year.

Some of the rye grass is still around and there’s some poa annua — the grass on the greens — in the rough, so occasionally players will get a good lie and hit a full shot. Find the thicker stuff and they’re hacking out, hoping to get it back to the fairway.

Around the greens, the kikuyu has taken hold in a gnarled mat, ready to gulp up golf balls and maybe even a few shoes.

“It’s wicked,” 2015 U.S. Open champion Jordan Spieth said. “Spotters are going to have to really be on their game because around the greens you can hit some shots five feet off the edge of the green and really have to look hard to find your ball.”

Then they have to hit it. That part might be even more difficult.