Nelly Korda Wins In Michigan For 2nd Victory Of Year 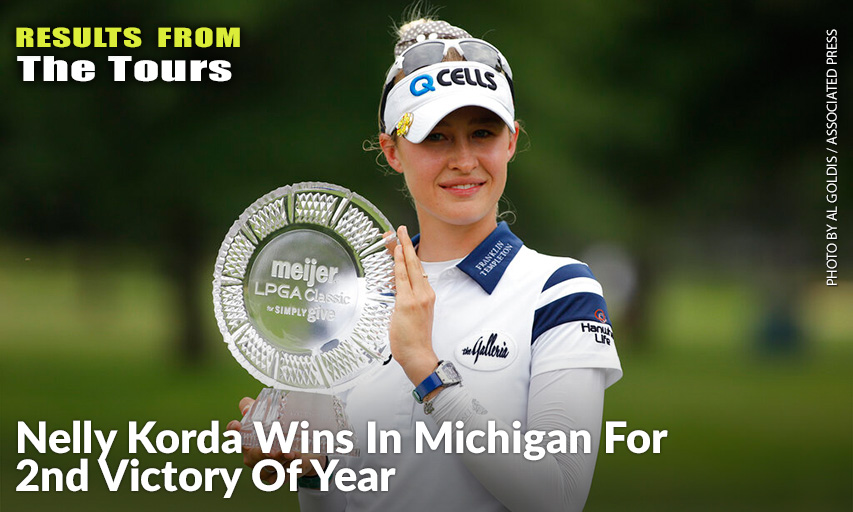 GRAND RAPIDS, Michigan (AP) — Nelly Korda became the first two-time winner on the LPGA Tour this season, closing with a 5-under 67 for a two-stroke victory in the Meijer LPGA Classic.

The Gainbridge LPGA winner in February, Korda finished at 25-under 263 to break the tournament record at Blythefield Country Club. She shot a career-best 62 [in the third round] to take a three-stroke lead into the final round.

“Actually, really enjoyed today,” Korda said. “Honestly, there has been times where on Sundays I really like haven’t enjoyed it, like the stress kind of ate me and I didn’t stay in the moment and enjoy playing golf on a Sunday in a final group.

“But today I really enjoyed it and it was actually a really good battle between Leona and I. She definitely kept me on my toes.”

The 22-year-old American, ranked No. 4 in the world, won her fifth tour title. She rebounded after missing the cut two weeks ago in the U.S. Women's Open.

“If you told me at the U.S. Open that I was going to shoot 25 under I would be like, `Yeah, right.’” Korda said. “But I did a good bit of work back home. My dad was at every practice, a little boot camp with my dad.”

She won the Gainbridge LPGA in Florida in the second event of the year after sister Jessica took the season-opening tournament. Younger brother Sebastian won tennis’ Emilia-Romagna Open in Italy in May for his first ATP Tour victory.

Leona Maguire of Ireland was second after a 66.

“I knew it was going to be a battle,” Maguire said. “I knew I had a lot of golf in front of me and she had a three-shot head start.”

Korda eagled the par-5 14th and had six birdies and three bogeys. She pushed her lead to two strokes with the eagle and increased it to three with a birdie on the par-3 15th. Maguire pulled within one on the par-4 16th when she made a birdie and Korda had a bogey. They both parred the par-4 17th and Korda birdied the par-5 18th.

“I made an eagle and then I made a pretty good birdie on that par 3,” Korda said. “Unfortunately, I three-putted the next hole, but that’s golf. You’re going to make mistakes.”

The major KPMG Women’s PGA Championship is next week at Atlanta Athletic Club.

“This week is going to be huge heading into a major,” Maguire said. “I knew I was playing some great golf. It’s a huge confidence boost for the rest of the season.”