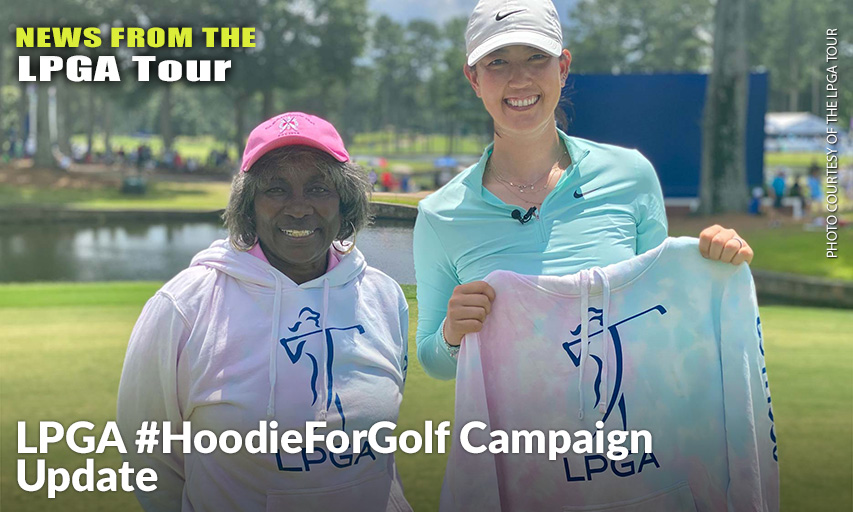 The #HoodieForGolf Campaign, led by Michelle Wie West to raise visibility of the LPGA and charitable funds to support two important initiatives to change the face of golf, released its first sales update today. More than 10,000 hoodies have been sold, representing a charitable of contribution of more than $225,000. All LPGA proceeds from hoodie sales will benefit the LPGA Renee Powell Fund and Clearview Legacy Foundation.

The campaign has been driven largely by social media with fans and friends of Wie West, Powell and the LPGA posting photos in the distinctive tie-dyed hoodie. The first posts of the hoodie by Golden State Warriors Damion Lee and Kent Bazemore went viral with the initial inventory of hoodies selling out within hours. The next restock was sold out in days and demand has exceeded supply in the weeks since the campaign began. The latest restock of the limited edition hoodie is now available at LPGAProShop.com.

“We had no idea how popular the hoodie would become and we’re so grateful for all the support and interest,” said Wie West. “We are seeing the hoodie everywhere, on athletes, celebrities and LPGA fans of all ages. I think it’s a combination of a great product benefiting a great cause and the power of social media. Wearing the hoodie has become a badge of honor for LPGA fans. What’s been crazy has been how quickly the size Large and XLs keep selling out. It’s just so amazing to see all the men who are fans of the LPGA wearing the hoodie.”

The #HoodieForGolf campaign was developed earlier in 2021 during travel and social-distancing restrictions from the COVID-19 pandemic. Wie West and Powell, along with Roberta Bowman, the LPGA’s Chief Brand and Communications Officer, worked together via Zoom and met for the first time in person Sunday, June 27 at the KPMG Women’s PGA Championship.

Today’s sales update coincides with the inaugural Renee Powell Clearview Legacy Benefit at Bobby Jones Golf Course in Atlanta. Co-sponsored by the LPGA, KPMG and the Mariah Stackhouse Foundation, all proceeds from the Benefit will support the Clearview Legacy Foundation.

“When I first heard about the #HoodieForGolf campaign I was deeply touched that two causes near and dear to my heart were chosen as the beneficiaries,” said Renee Powell. “My father built Clearview Golf Course as a welcoming place for people of all backgrounds to enjoy the game of golf. It is the only golf course designed, built, owned and operated by an African American. I’ve dedicated my career to keeping my father’s legacy alive. In honor of its 75th year in 2021, we started a campaign to endow Clearview Golf Course and preserve its significant part of our American history.

“I truly believe the LPGA’s Renee Powell Fund will help us change the face of golf and allow all girls the opportunity to be included. Only when girls see someone who looks like them will they feel confident and comfortable to jump in and try something different.”

The LPGA hoodie is available for purchase at LPGAProShop.com. Share your photo with the hoodie on social media using the hashtag #HoodieForGolf.