Jin Young Ko Wins On LPGA A Week After Losing No. 1 Ranking 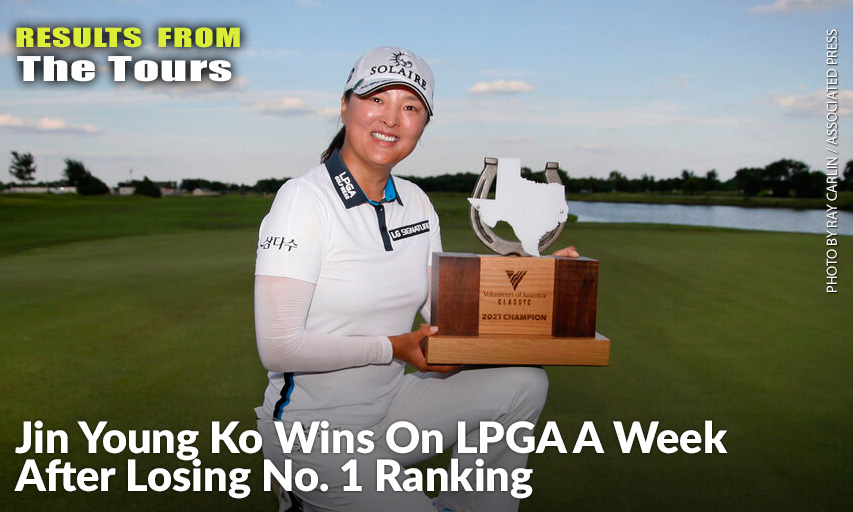 THE COLONY, Texas (AP) — Jin Young Ko wanted a new trophy for her new house in Texas, and she even picked up something for the closet.

She received a pair of cowboy boots for winning the Volunteers of America Classic.

The South Korean star had to work hard for her one-shot victory. Her putting was not up to her standards. Her game didn't feel quite as sharp as it was during Ko's nearly two-year reign as No. 1 in the women's world ranking.

But it was enough for a 2-under 69, closing with seven straight pars for a one-shot victory over Matilda Castren of Finland at Old American Golf Club, about 30 minutes from Ko's new house.

“I was thinking these boots is good size for me,” Ko said. “So yeah, I just bought a house and then I want to get new trophy because my old trophies is in Korea. But this new one is special.”

The timing couldn't have been better.

Ko won for the first time this year, and it was one week after she lost the No. 1 ranking to Nelly Korda, who supplanted Ko by winning the KPMG Women's PGA Championship.

Ko had failed to finish in the top 10 in four of her previous five starts on the LPGA Tour. But not far from her American home in the Dallas area, she thrived. She finished at 16-under 268 for her eighth career LPGA victory. She remains at No. 2 in the world.

Staked to a one-shot lead, Ko opened with three birdies in four holes to widen her lead. Castren, who won her first LPGA Tour title three weeks ago at Lake Merced, kept her in her sights with a pair of birdies before making the turn.

“I was thinking I couldn’t win this week because like Matilda, she played really well today and yesterday, too,” Ko said. “It’s like I want to focus on my game on the course and then I tried to not think about Matilda, how she play, hit driver or whatever. And it was tough. But yeah, she’s good player.”

Castren was in danger of falling three shots behind on the par-5 13th when she was in trouble off the tee and had 20 feet left for par, with Ko about 12 feet for a birdie chance. Castren holed her par putt, Ko missed and the lead remained at one.

The roles were switched on the next hole when Ko missed her tee shot well to the right and couldn't reach the green, pitching to 6 feet. Castren had a wedge into the green, but she couldn't convert for birdie and Ko saved par.

The tournament swung on the 15th hole when Castren missed a 3-foot par putt that snapped hard to the left, falling two shots behind. She got up-and-down from just short of the par-5 17th for birdie, and stayed in the game when Ko missed her birdie putt from 6 feet.

Castren had a 25-foot birdie from off the back of the 18th green that missed to the right, setting up Ko's winning par putt from just outside 3 feet.

“I played with her the last two days and it was just really cool to watch her play,” Castren said. “She didn’t make many mistakes at all, recovered from her not-so-great shots really well. I can definitely see why she was world No. 1 for so long.”

Gaby Lopez of Mexico closed with a 65, making her only bogey on the final hole. She finished alone in third, two shots behind.

Esther Henseleit of Germany was within two shots with five holes to play. But on the 14th, her drive went under a tree and she had to take a penalty drop. Then, she lipped out a 4-foot putt and made her second double bogey of the round, falling four shots behind.

Henseleit closed with a 72 and tied for fourth with Ana Belac (68) and Emma Talley, who shot a 63 for her career low round on the LPGA Tour.

Ko had plenty of support at Old American, with a large contingent of Koreans in the gallery. Ko is among several South Koreans who are based on the Dallas area.

Her father's birthday was Thursday, and Ko opened with a 63. Her parents were at Old American because it was a short drive from her new home.