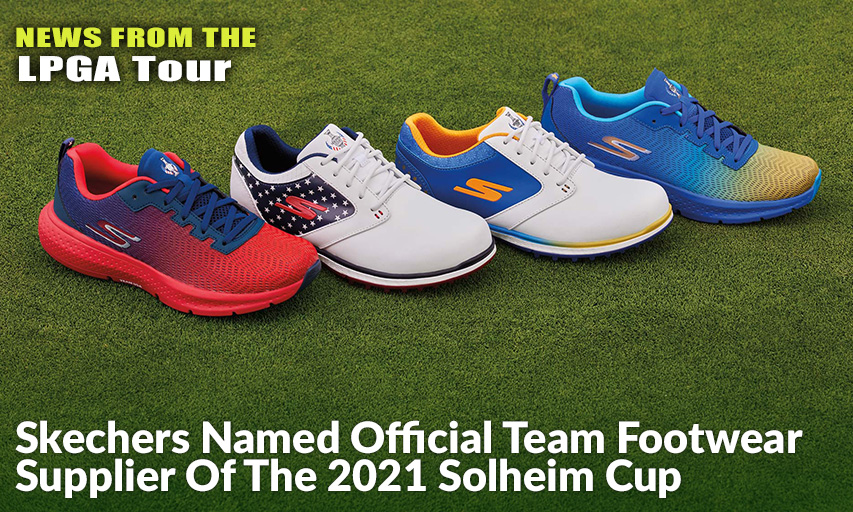 For the first time, Skechers has been named the official footwear supplier of both the European and United States Solheim Cup Teams for the 2021 tournament. The footwear company, known for developing award-winning golf shoes worn by elite athletes including Brooke Henderson, has designed exclusive Skechers GO GOLF Elite 3™ styles in unique colors for the United States and European teams, to be provided to players—with Skechers also providing footwear to caddies and support staff—during the September event at Inverness Club in Toledo, Ohio.

“As the Solheim Cup moves back to the States, it’s a perfect time to expand our partnership with this storied event in women’s golf,” said Michael Greenberg, president of Skechers. “After outfitting some of the top European players through the tournaments in 2017 and 2019, we look forward to seeing the American women wearing Skechers GO GOLF as well this year. This event is a perfect opportunity to reach fans on both sides of the Atlantic and illustrate why golfers everywhere have come to love the innovative performance and comfort of Skechers GO GOLF footwear.”

“We are excited to expand the previous partnership with Skechers as they become the Official Footwear Partner for the entire 2021 Solheim Cup," said Solheim Cup tournament director Becky Newell. "We know that the styling, performance and comfort offered by Skechers is a perfect match for our players and the support staff on both sides of the competition.”

European Solheim Cup Captain Catriona Matthew said: “When it comes to the game, Skechers GO GOLF delivers with footwear that offers the comfort players need for three days of competition at the Solheim Cup. I’m thrilled that our team will be partnering with the brand for the third time.”

United States Solheim Cup Captain Pat Hurst said: “I know the European women found success with Skechers on their side two years ago, so now in my first year as captain with Skechers on our side as well, I hope we can bring the trophy home.”

In addition to pairs of shoes for the golfers, support staff and officials will be provided with Skechers GO RUN Supersonic™ style footwear in team colors, with caddies outfitted in a special waterproof version. This is the first time Skechers will supply footwear to both sides after previously sponsoring the European team in 2017 and 2019. Known for its lightweight, high-quality, stable and comfortable designs, Skechers GO GOLF has achieved prominence within the golf category alongside the brand’s award-winning running, walking and training collections.

About SKECHERS USA, Inc.
Skechers (NYSE:SKX), the comfort technology company based in Southern California, designs, develops and markets a diverse range of lifestyle and performance footwear, apparel and accessories for men, women and children. The Company’s collections are available in the United States and over 170 countries and territories via department and specialty stores, and direct to consumers through 3,989 Company and third-party-owned retail stores and e-commerce websites. The Company manages its international business through a network of global distributors, joint venture partners in Asia, Israel and Mexico, and wholly-owned subsidiaries in Canada, Japan, India, Europe and Latin America. For more information, please visit about.skechers.com and follow us on Facebook, Instagram, Twitter, and TikTok.

The Solheim Cup is named in honor of Karsten and Louise Solheim, founders of Karsten Manufacturing Corporation, which makes PING golf equipment. In 1990, the Solheim family, in conjunction with the LPGA and the LET, developed the concept and became the title sponsor for the Solheim Cup. Today, the Global Partners of the Solheim Cup are PING, Rolex and Marathon Petroleum.

Held every two years, the event has grown into the most prestigious international women’s professional golf team event. The 2021 Solheim Cup will be held at Inverness Club in Toledo, Ohio, on Sept. 4-6. In 2019, Team Europe took a thrilling 14.5-13.5 victory that came down to the final putt. Team USA heads to Ohio leading Team Europe 10-6 all-time in Solheim Cup competition.